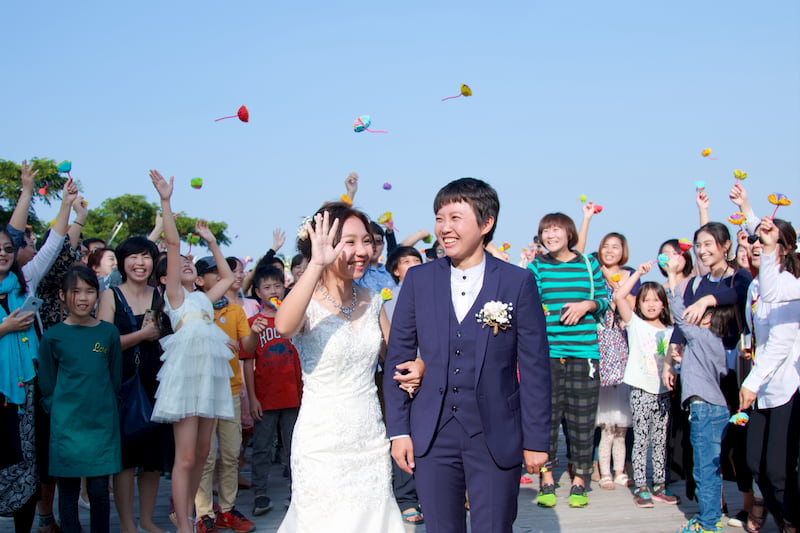 Same-sex Marriage Adoption in Taiwan: When Can We Start A Family?

(TAIWAN)—When wedding bells rang and dozens of colorful flowers were thrown into the sky, Yi-ling Chen and Yi-ru Lin walked hand in hand witnessed by their beloved family and friends in an outdoor garden in Kaohsiung. The wedding ceremony symbolized their determination to move to the next stage of their relationship as Taiwan prepared to legalize same-sex marriage.

Little did they know, how far they were from complete marriage equality for same-sex couples in Taiwan.

Chen and Lin are both homeschooling educators, tutoring school-age children. To fulfill the dream of starting a family, they had planned to have a child together. When that was not possible, Lin adopted Yangyang, a 10-month boy, wanting Chen to become his other parent.

Lin got her wish to become a parent, but under Taiwan’s current laws, Chen, her spouse, cannot adopt Yanyang.

Homosexuality was once taboo

Taiwan once regarded homosexuality as taboo. People were ridiculed for their sexual orientation, gender identity, and gender expression. One of the better-known tragedies is the story of “Rose Boy,” a 15-year-old Taiwanese boy who was bullied for his feminine expression and died under mysterious circumstances at his school.

The story has become a cautionary tale for the lack of acceptance of differences. Since then, the Ministry of Education reorganized its Committee on Gender Equity Education to  respect and protect LGBTQ+ students and those bullied for not conforming to gender norms.

As attitudes changed in Taiwan, the movement to expand rights for the LGBTQ+ community moved from campus to society with same-sex marriage as a common goal.

In order to help those who were abused or persecuted for their sexual orientation, multiple groups joined together to organize the first “Taiwan LGBTQ+ Pride Parade” in 2003. It has been held on the last Saturday of October every year since then. In the first year, about 1,000 people participated in the parade, and it is now the largest LGBT+ Pride Parade in East Asia.

Finally, in 2019, the LGBTQ+ community made their marriage dream come true. On May 24, Taiwan announced the Act for Implementation of J.Y. Interpretation No. 748, saying “two persons of the same sex may form a permanent union of intimate and exclusive nature for the purpose of living a common life.” With this, Taiwan became the first country in Asia to legalize same-sex marriage. 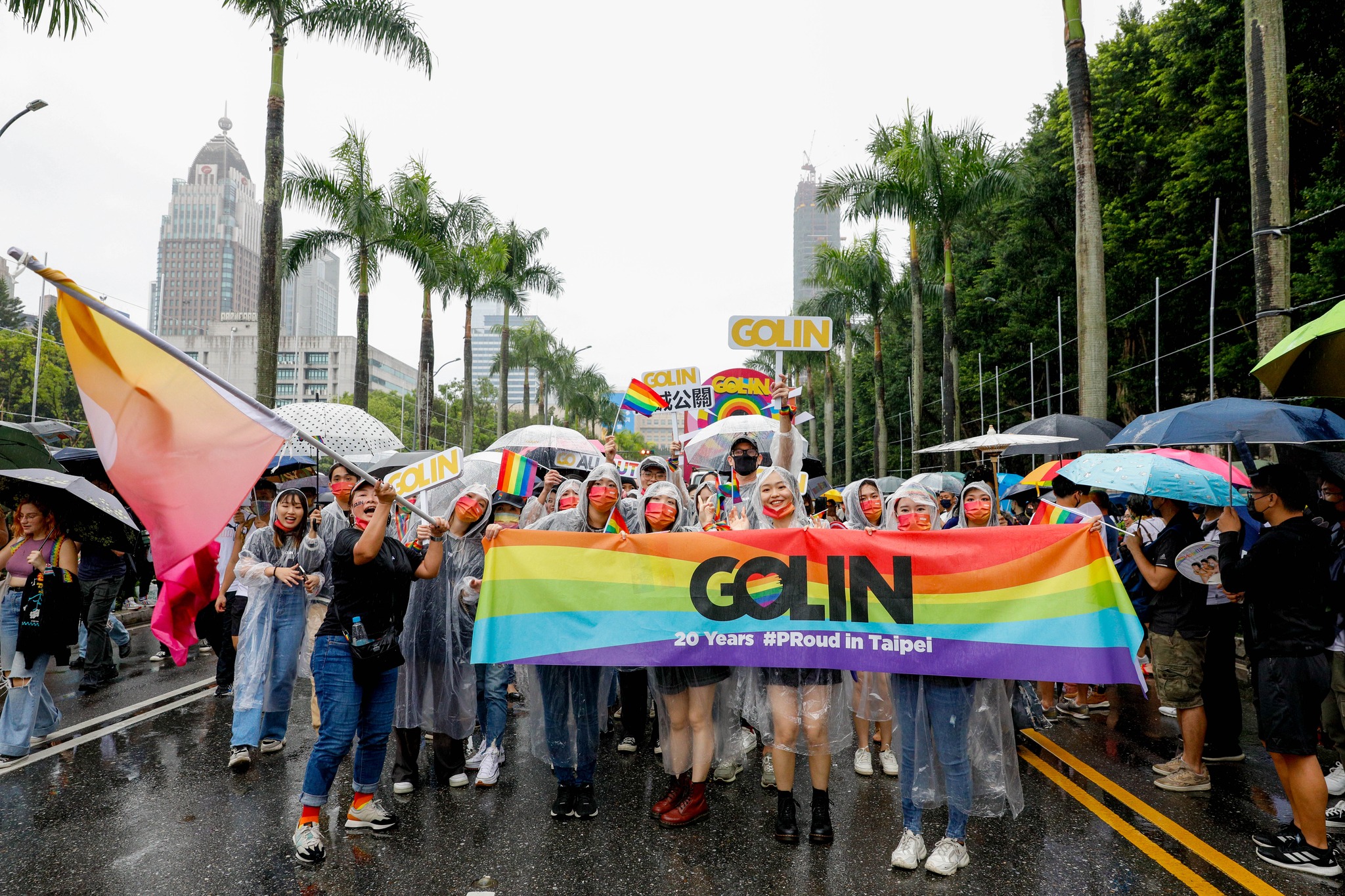 This year, the parade celebrated its 20th anniversary on Oct. 29, attracting more than 120,000 people to the streets. After achieving their goal of legalizing same-sex marriage, LGBTQ+ activists are pursuing equal rights in adoption.

“The parade brought more people to see the diversity of LGBTQ+ community,” Hao-Zhe Hong said, the director of Taiwan Rainbow Civil Action Association. “We hope Taiwanese friendliness towards the LGBTQ+ community can also be implemented into our daily life.”

A decade before she married Lin, Chen had a heterosexual marriage, where she suffered from violence and verbal humiliation, but never dared to leave. Bearing the traditional social expectations for women, her response to failed marriage was self-blame.

“At that time, marriage was like a tomb to me,” Chen said. “You could get in, but you couldn’t ever get out.”

She finally managed to get out after she agreed to help her ex-husband pay off his debts. She never imagined that she would marry anyone again, much less another woman.

Everything changed after she met Lin at work.

“I found myself having chemistry with Lin and wondering if I was crazy,” Chen said. “I thought it was impossible, so I tried to escape from this feeling by traveling.”

Then came a trip that changed everything. Chen was scuba diving at Orchid Island off the coast of Taiwan when she accidentally let go of the rope and drifted far away from the shore. Realizing this could be the end of her life, she only had two thoughts: one was to say “I love you” to her parents, and the other was the regret of not expressing her heart to Lin. Once she was rescued, she decided to be with Lin when she returned to Taiwan.

“Lin was the first person who made me feel that we could tell the truth. We quarreled like other couples did, but she would never hurt me,” Chen said. “In the nine years we have been together, we always reflected on ourselves in every communication, and Lin gave me 100% security to let me express myself.”

The relationship with Lin made Chen start to imagine a bigger picture for their future, including getting married and having a loving family with children.

Two mothers and one son

Lin adopted Yangyang before she registered for same-sex marriage with Chen. Living in southern Taiwan, which is more traditional than the north, they are often surrounded by strange looks on the street, but they have gotten used to it.

“One time when we took Yangyang to see a doctor, the doctor asked, ‘Who is the mother?’” Lin said smiling. “We both raised our hands.”

As same-sex parents, Lin believes that they are no different than heterosexual families because the process of parenting is the same. Some people may question how two mothers could teach sex education to a son, but Lin thinks this is an issue for society to work through, providing more resources to same-sex families.

“How society views same-sex families will determine what challenges children face,” Lin said. “If society does not support families like us, those children will have a hard time growing up.” 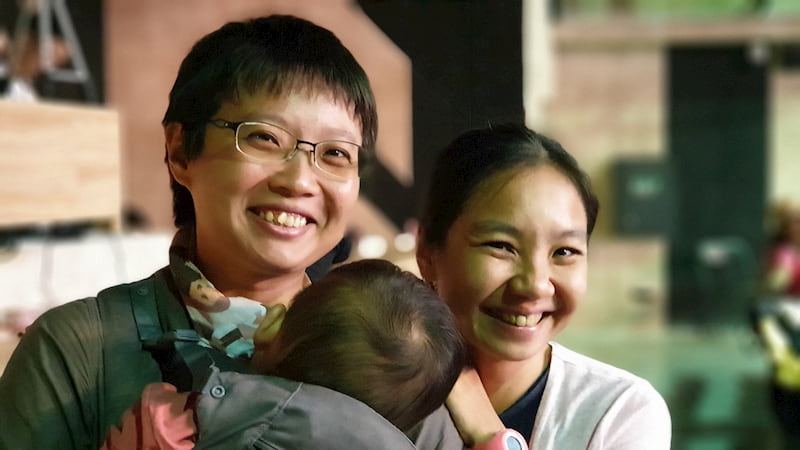 To give Yangyang a complete family with two legal parents, Lin applied for joint adoption with Chen after their marriage. The Protection of Children and Youths Welfare and Rights Act only allows one parent in a same-sex marriage to adopt a biological child but not an adopted child brought to the marriage. The child and the parent who cannot adopt remain strangers.

Yangyang is now a four-year-old boy, still recorded as living in a single-parent family. On August 12, to support adoption rights for same-sex couples, the Taiwan LGBTQ Family Rights Advocacy, Taiwan Equality Campaign, and Taiwan LGBTQ+ Hotline Association held a joint press conference to speak out for Chen and Lin. They filed a petition for constitutional interpretation as an individual case.

“If the justices can make a decision to protect the basic rights of adoption for same-sex couples as soon as possible, it will help many same-sex families to go through the adoption process more smoothly,” Zhu-Yuan Deng said, the deputy chief executive officer of Taiwan Equality Campaign.

According to the Department of Household Registration Affairs in Taiwan, a total of 7,757 same-sex marriages have been registered in the three years since same-sex marriage was legalized, including 5,469 pairs of women and 2,288 pairs of men. The Gender Equality Committee of the Executive Yuan conducts a yearly telephone survey on the public’s attitude toward same-sex couples’ rights to adopt children.

The annual survey shows a positive change in attitudes toward LGBTQ+ residents after the passage of same-sex marriage in Taiwan. The idea that same-sex couples should have equal rights to start a family has gradually been recognized and respected by the public.

Still the law has not been changed.

“Our current rules in the Protection of Children and Youths Welfare and Rights Act are not in the best interest of children,” said Jay Don, a lawyer assisting in Chen’s and Lin’s case. “We believe that based on the duty of safeguarding human rights, the justices will face up to this inadequacy, and remove difficulties for same-sex couples.”

Don further explained that those same-sex couples who faced the same issue as Chen and Lin could only file a lawsuit as an individual case. However, most of them would not do it because the process of filing a lawsuit was complicated and time-consuming, so many would just have to live with the inequity.

On the 20th Taiwan LGBTQ+ Pride Parade, Yun Fan, a Democratic Progressive Party legislator, said that members of Legislative Yuan have proposed a drafted amendment to Article 20 of the Act for Implementation of J.Y. Interpretation No. 748, intending to guarantee same-sex couples equal adoption rights as heterosexual couples.

If the amendment passes, same-sex couples will no longer have to fight alone for equal adoption rights, and it will be another big step forward for the LGBTQ+ community in Taiwan.

Hearing about the most recent developments on same-sex marriage adoption rights, Chen and Lin expressed optimism.

”We genuinely hope that the justices can accept and hear our case, and let our love grow in joy rather than tears,” Chen said. “On top of that, we hope that Yangyang will grow up healthily in a safer environment for same-sex families.” 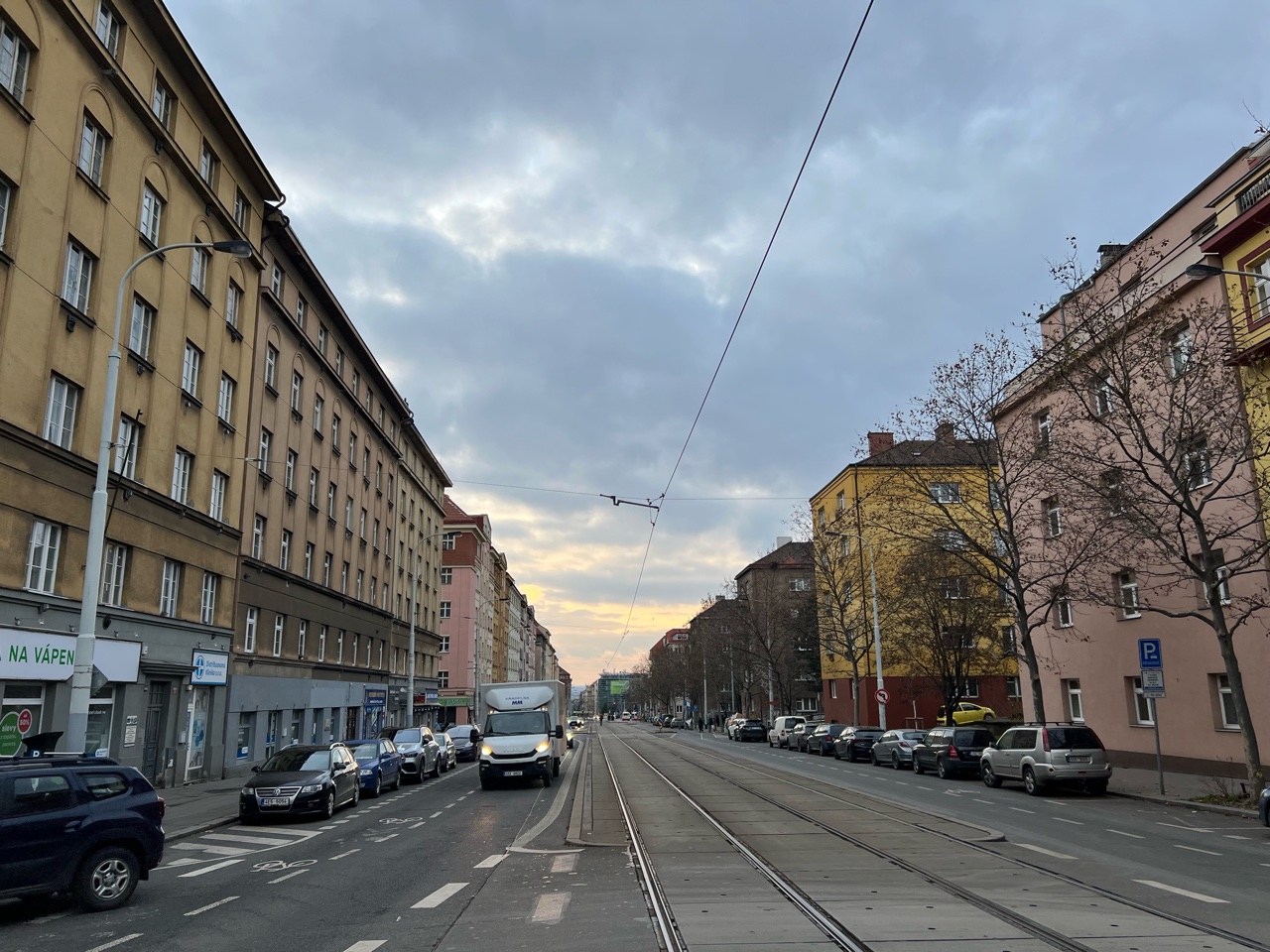 Prague wanted to change the name of street honoring a once-revered Soviet general who has fallen out of favor with the war in Ukraine. The proposal did not sit well with a number of residents, who now oppose the move.