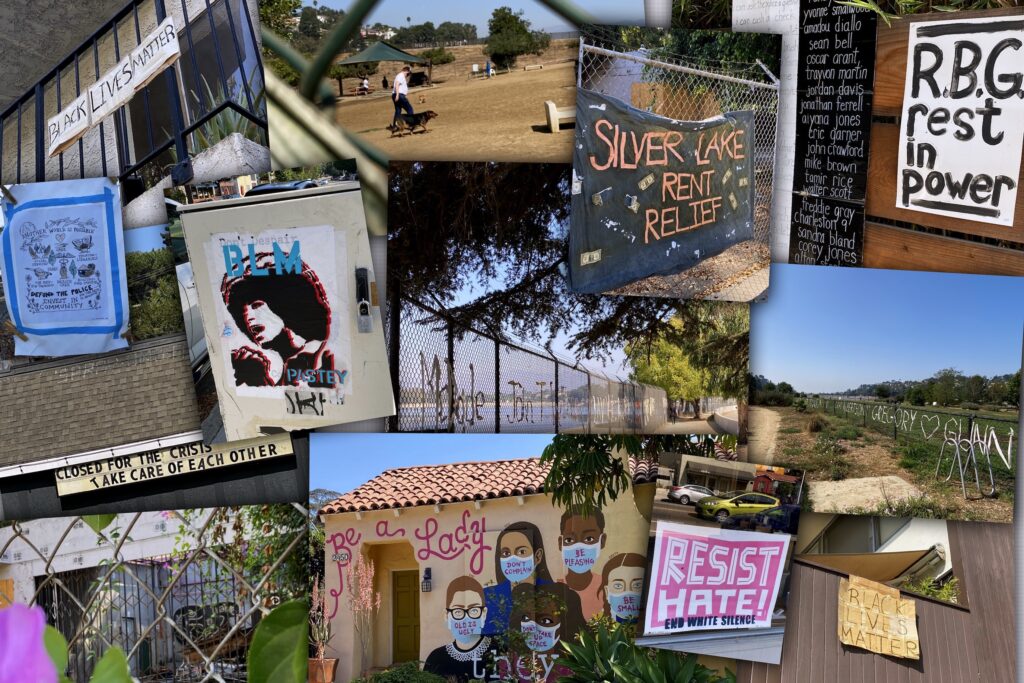 (LOS ANGELES) — A chain link fence circles the Silver Lake reservoir. Around it are hundreds of names of African American citizens killed by police. Woven in the galvanized steel along this 2.2 mile circumference, the Say Their Names: Silver Lake Memorial went up shortly after George Floyd’s death in honor of the Black Lives Matter movement. Some of the material has deteriorated from exposure to the elements, and the Los Angeles Department of Water and Power issued a statement in August saying it planned to take down the installation.

Driving past the installation does it no justice and only creates a blur—both in vision and in memory. Yard after yard, the sheer number of names is a sobering reminder of 2020’s ongoing protests. Finally, a 50-minute walk and quick jaunt in the car yields the name that became a touchpoint, an anti-racism awakening in the thousands of protests that took place in all 50 U.S. states, over 2,000 cities and more than 60 countries worldwide. Some 15-26 million Americans participated in protests from May to July because of this name: George Floyd, and to his right, Eric Garner, Ahmaud Arbery and finally, Breonna Taylor.  “Say her name” was an oft-repeated phrase this summer, but later that day in Kentucky, no police officer was charged with her death. Breonna was somehow still being forgotten.

The major thoroughfare circling the reservoir is Silver Lake Boulevard. A bustling street known for its boutique shops and popular dog park, it is usually populated with toddler-towing parents, young professionals, and puppy owners. Cars are still barrelling through, but there are signals everywhere that things have changed.

Dogs are curious as ever, tongues happily wagging but the owners have stopped saying, ‘hi.’ Six months into the Los Angeles lockdown, and there is still an air of mistrust and reticence in a community that is normally friendly and open. Fewer joggers were out and about — all wearing masks. In the almost empty park, three foam roller-toting yogis were packing up to leave. 100 yards away, a woman with her son did their best to get a kite up in the air.

As many businesses have shuttered throughout the country, stores here too, have closed. Something is wrong when a popular neighborhood like this has multiple vacancies in prime spots. The few struggling to survive (though most weren’t actually open on this mid-morning Wednesday) have affixed now-familiar signs on their storefronts enforcing social distancing, mandating masks, limiting patron entry, and invitations for dining in—Patio Dining Now Available!

On the north side of the reservoir sits a colorful and unusual house: a mural covering almost the entire facade with an image of Ruth Bader Ginsburg, along with other women, each wearing a mask with edicts a lady should supposedly follow: “Old is ugly, Don’t complain, Don’t take up space, Be pleasing, Be small.”

The sun was shining, hot, but the air quality was better than it had been the past few weeks. A normally blue sky had a grayish tint and the air carried an acrid smell from recent fires. And the remnants of an installation — meant to honor the memory of those killed from police violence — symbolize how tenuous a grasp that is human memory. One cannot help but hope that the return to “normal” will usher something new—a better way, a kinder existence, a same — but different — world.