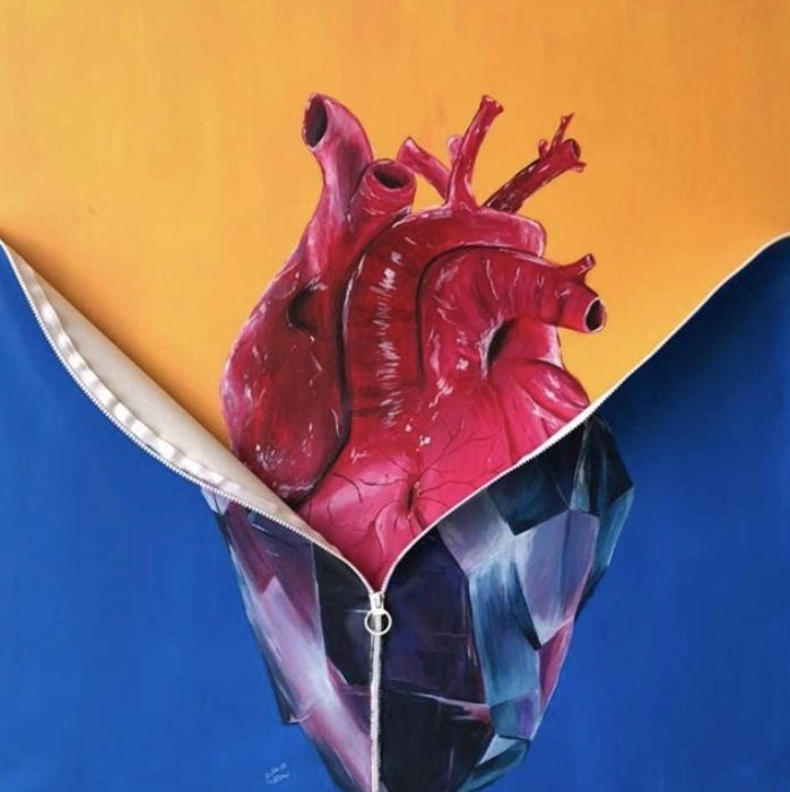 The Heart Before it Froze [Credit: Faisal Al Tayeb]

“The Heart Before It Froze” [Credit: Faisal Al Tayeb]

Lodged in previously deserted buildings, cafes that would not have been allowed to open only three years ago are now filled with music and art.

The city of Khobar is a four-hour drive from Riyadh, capital of the Kingdom of Saudi Arabia, and is best known for the King Fahd University of Petroleum & Minerals. Now, however, Khobar has a new claim to fame: It’s the epicenter of a burgeoning art scene.

The country’s long-standing conservative culture and atmosphere started to shift in 2016 when the country’s crowned prince, Mohammed bin Salman, introduced Vision 2030. That initiative aims to make big changes in every aspect of Saudi society — from the financial sector to housing — as well as help the economy become less dependent on oil. In 2018, through Vision 2030’s Quality of Life Program, the government hosted more than 5,000 live events across the country, including musicals, art exhibitions, and even comedy shows. 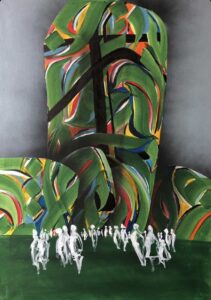 With the government allowing artists much more leeway since 2019, many young people started sharing their creations publicly. In Khobar, painters, bands and fashion designers began to pop up in cafes tailored specifically for artists.

Now, Saudi artists incorporate a traditional flare in their projects. Some weave Arabic calligraphy into their work, while others use the Arabic language when they sing. Fashion designers are more and more relying on Saudi models to show off their clothing.

“Saudis frequently travel abroad to observe an art scene,” said Faisal Al Tayeb, a visual artist and Khobar native. “I hope that one day we are the hub of art and the world travels to us to see it. We have intelligent, creative, and talented people on the rise.”

Artists like Al Tayeb have been able to shift from painting landscapes — the only form of painting previously acceptable in Saudi Arabia — to exploring portraits and abstract styles.

A maintenance machinist by day and an artist by night, Al Tayeb learned how to paint through other artists he met at underground meetups. Though he uses many styles, his favorite and most popular technique is combining Arabic calligraphy with photography and painting to create contemporary art.

“Art is something special; it is food for your eyes and soul. The more we see it, the more we think and develop. That is why I want to create even more art to be displayed in the city,” he said. “I use Arabic calligraphy to draw objects and merge it with contemporary art because our language is beautiful, calligraphy itself is an art — I can mold it to create what I want and get the feeling across to others.”

Like other artists, Al Tayeb believes this movement is critical.“I see how it has been positively bringing people together, allowing for us creatives to inspire one another even more, and inspiring the new generation of Saudis,” he said.

In this art scene, musicians are emerging, as well. Though there are many famous artists who sing and produce traditional music, such as Mohammed Abdu, Majid Al Muhandis, and Abdul Majeed Abdullah, Saudi Arabia didn’t have its own indie rock band until 2018, when Jwa Band was established.

Unlike other bands, which usually perform songs in English, Jwa Band write and sing their songs in Arabic.“Arabic is our language,” said Methgal Al-Shammary, founder of Jwa. “We can sing in English and even Turkish, but then we will be like any other cover band in Saudi. We wanted the identity of the band as an Arabic indie band.” 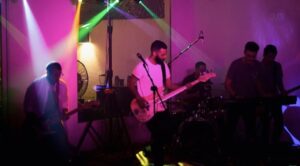 Jwa Band’s members come from different areas of study globally, giving them different musical backgrounds and different sounds, allowing for them to experiment more in the types of music they produce. “Each one of us has a touch that we add to the band, making us also more relatable across the Kingdom,” said Mansour Algallaf, Jwa’s guitarist.

“With the shift in the art scene, and the government support we get with the new regulations allowing us to perform publicly in any event, it means we can host large concerts, meaning reaching a larger audience influencing more people,” said Mohamed Al-Nahas, Jwa’s vocalist/bassist.

Algallaf feels strongly about using this support to their advantage, and making sure it helps future concerts “have more impact on people.”

“I see it when I play, the connection I have with the audience, the eye contact,” Algallaf said. With the global pandemic ongoing, Saudi Arabia’s Ministry of Health is enforcing mandatory mask wearing, which allows bands to play in cafés with social distancing. However, they still cannot host large concerts.

Despite the health crisis, Jwa continues using its platform to inspire younger musicians to step out of their shells and try making music. “By doing so, we are creating more musicians and impacting the art scene in the city even more. The hope is to be a household name in the Kingdom, bringing together indie bands from all cities and hosting one large music festival,” said Fawaz Baasem, Jwa’s keyboardist.

Khobar’s art scene does not end with visual art and music — fashion is another important part of the movement. Fashion brand Astro launched in May 2020 with a purpose and mission to “be involved in the community at a higher level, creating something that no local brand has done before,” said Ahmed Alsenan, Astro’s founder. 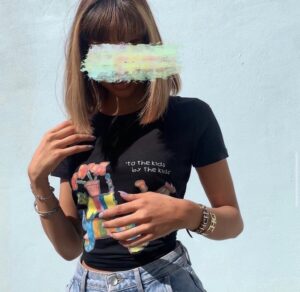 Astro’s Collection “For The Kids, By The Kids.” [Credit: IWANTASTRO]

“By adding all of these initiatives, we are making our community a better place through the language of art and fashion,” he said. “We are flourishing, the Kingdom is flourishing, and the art scene has become essential in the daily lives of many of us.”

These artists and this spread of art has been occurring through many cafés in the city. Cafés now open their doors for artists to paint on the walls and create live art, musicians to play and perform, and fashion designers to display their clothes. The art scene in Khobar attracts artists from other cities, as well: Many travel from the capital to attend music nights and discuss different mediums with the town’s local artists.

But these cafés are still relatively new. Before the government created Vision 2030 and allowed for an art movement, the only way to meet with other artists was through underground meetups, because it was prohibited for men and women to come together and share art.

That’s how Taawon Hub, now a popular Khobar café, began: Its four founders wanted a sense of community and started an underground meetup.

“The idea is to bring artists together to exchange ideas and talk about hot topics around the art scene,” said Elham Almas, co-founder of Taawon Hub. “There were huge risks when we were hosting these underground meetups, but it was incredibly worth it when we witnessed how the artists blossomed,”

Thanks to the shift in regulations and the overwhelming government support toward the art scene, Taawon Hub was able to open its doors two months ago. The place is split between a creative space for artists to make art and perform music, and a coffee shop in which individuals can get their coffee or drink and enjoy the artsy atmosphere.

Artists meet up for hours every weekend in the “creators” portion of Taawon Hub, practicing different styles of painting, sharing tips and tricks, and even teaching new artists who have never touched a paintbrush before. Taawon Hub does not have any restrictions on who can go into the cafe to create art — some artists even bring their children along so they can begin learning at a young age. 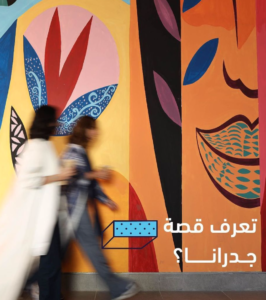 “Do You Know The Story of Our Walls?” [Credit: Taawon Hub]

“When I see people enter Taawon Hub, even if it’s to grab a cup of coffee on the go, I see their eyes sparkle; it gives me joy,” Almas said.

What started as underground meetups among young artists has become a movement that the artists want to continue to grow and expand upon.

“We are equally as talented as the West, we are fully capable of creating our own art movement and influencing not only our people but those beyond these borders,” Al Tayeb said. “Our rich history and culture is like no other; molding that into something modern is a gift.”

The nation, the city, and the artists have all gone through dramatic transformations, and only time will tell what’s next for each of them.“Over the past year alone, Saudi has changed, and the people of this rich land have changed with it,” Almas said.