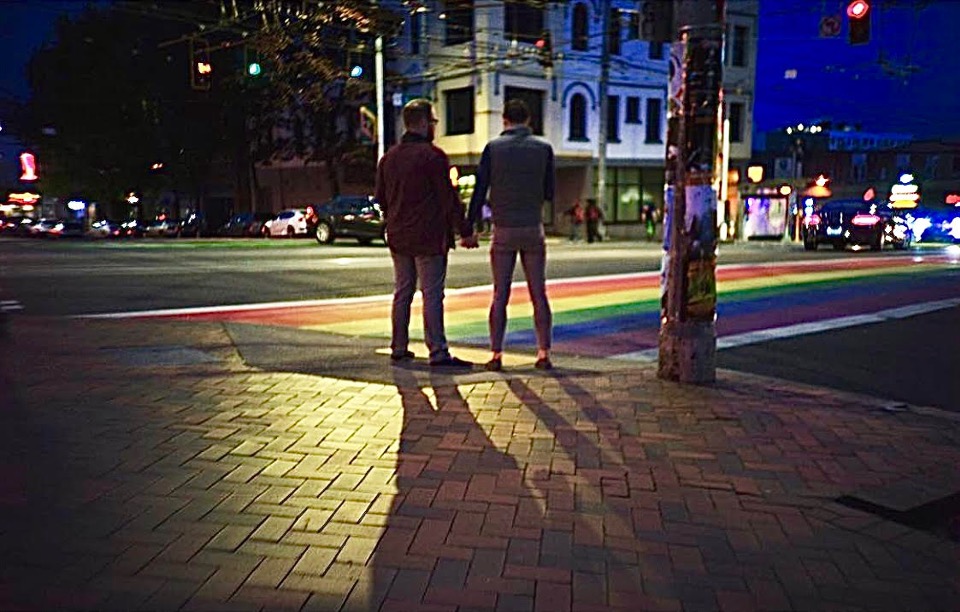 A couple holding hands on one of the many iconic rainbow crosswalks on Capitol Hill. [Photo credit: Rori Syarif H. IG: Rorish]

A couple holding hands next to one of the many iconic rainbow crosswalks on Capitol Hill.
[Credit: Rori Syarif; @Rorish on Instagram]

(SEATTLE, WA) — For half a century, a lively LGBTQ bar scene gifted the Seattle neighborhood of Capitol Hill with an effervescent energy. But the ongoing pandemic has forced many of those bars to shutter, dimming the spirits of its community and patrons.

Londyn Bradshaw is a Capitol Hill resident. Bradshaw, who was crowned Miss Gay Seattle and Miss Gay Washington 2018, said that the state-mandated closures of gay spaces in the neighborhood has severely affected the community’s mental health.

“Most people in the LGBTQIA+ [community] considered bars a better safe space than most of our own personal residences,” Bradshaw said. “We very quickly lost those safe spaces. I don’t think it affected us until probably a month to three months in, when we realized that we probably will never go back to those places ever again.”

A NEIGHBORHOOD STRUCK DOWN

Capitol Hill is known for its rainbow crosswalks, gay and lesbian bars, pride parades, and historic LGBTQ businesses. The neighborhood typically sees thousands of visitors each weekend, on top of its nearly 20,300 residents. 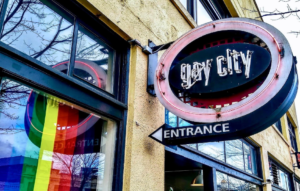 Jamie Pedersen is Washington state senator who oversees parts of Seattle, including Capitol Hill (where he also lives). “Prior to the pandemic, Capitol Hill was famous for its nightlife, including bars catering to the LGBTQ community,” he told The Click. “They constitute a major social hub and a significant economic driver. Most have now been shuttered for many months.”

“Even in the best of times these businesses struggle and often disappear. Without targeted help, many may not recover from this devastating crisis,” said Joey Burgess, owner of The Cuff Complex and Queer Bar, two of Capitol Hill’s most cherished gay bars.

The Cuff Complex opened in 1993. It features a large main floor decorated in black and white décor, fluorescent rainbow lights, disco balls, and an elevated stage for live music and karaoke. An outdoor patio with tables under a large, lit canopy allows patrons to cool off outside and enjoy the chilly Seattle breeze.

“It was a friendly neighborhood kind of bar where you know 90% of the people in there. The super friendly staff just make it a comfortable place,” said Brian St Julien, who’s been a patron of The Cuff Complex for over 19 years.

“I enjoyed going to The Cuff to just be around other community people and relax,” St Julien said. “I think they are important to the community as a meeting place for people, to meet someone new, or just hang out with friends and similar faces.”

After four months of closure, The Cuff Complex reopened its doors under state-mandated limited hours in July.

Kristopher Zello (who’s known as Kristie Champagne when she’s on the stage strutting her nylon-laced legs in drag) is an employee at The Cuff. He mentions that there has been a definite shift in the gay scene with less LGBTQ-inclusive options readily available. 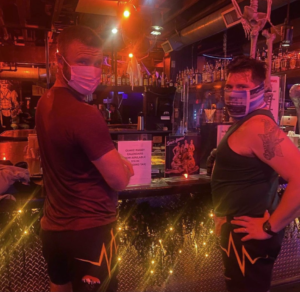 “We do have some amazing customers who have been coming out for years and are awesome and super loyal,” he explains, “but there are also the people who are coming out and acting like nothing is wrong and there is no COVID, which puts the employees at risk.”

Strict adherence to all state-mandated rules is required, per the Washington State Department of Health. Patrons are to wear face coverings while dining at all establishments. Alcohol consumption must end at 11 pm, with tables placed six feet apart and a maximum size of six individuals per table. No bar seating is permitted.

Zello said that, for the most part, everyone is happy to come out and follow the rules.

“Gay bars are so important to the community,” he explained. “They give us a safe space to be ourselves. A lot of gay people are estranged from family, so they find a sense of that in their community, which involves gay bars.”

A National Survey conducted by The Trevor Project in 2020 found that out of 40,000 LGBTQ individuals between the ages of 13 and 24, around 11,600 have experienced homelessness or have run away due to family rejection. Among those participants, 50% reported being kicked out of their home.

“If I didn’t have the support of my bar and job, I def would have struggled way more than I did,” Zello said.

The last remaining lesbian bars in the country is just two blocks east of The Cuff.

The Wildrose opened in 1985, and since then, patrons have come to dance, mingle, and seek refuge in an inviting, safe space. 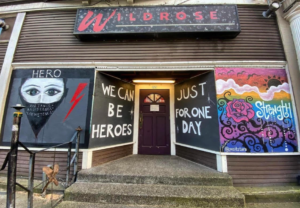 The Wildrose on Capitol Hill in April. [Credit: Jaime McBroom; @Jaimearoundseattle on Instagram]

Aeryn Saint, a transgender woman in her 50s, came to Capitol Hill in the early 1990s in Seattle’s Gay Men’s Leather community, a social group dedicated to gay sex-positive culture. “The Wildrose is both historically significant and a place where I know that I am welcome,” Saint said. “I’ve lost very much since coming out as transgender. I still have the Wildrose.”

“Places like the Wildrose are spaces safe to socialize, explore the energy of the place where we are the majority,” Saint said. “Without these places, we lose that one in-real-life space where it’s OK to be ourselves and maybe find our girlfriends, our music, and that one night that changed all the days after. They’re worth all the support we can give to keep our spaces.”

Washington state-mandated orders forced The Wildrose to close in March.

The owners created a GoFundMe on April 2 titled “The Wildrose Needs Your Help.” Shelley Brothers, co-owner of the Wildrose, wrote on the fundraising platform: “We are the oldest Lesbian Bar on the West Coast, and one of the only ones left in the country. We’ve prided ourselves on being a community gathering space and have taken great pride in supporting the LGBTQ community in all kinds of ways, big and small, since our inception. As Owners, we have put everything we have into the business, but it won’t be enough.”

The GoFundMe account collected over $53,000 in just three months and continues to grow as the fundraiser remains open.

In August, the Wildrose reopened for business. Their daily hours have significantly decreased, operating only for four hours each evening.

“The Wildrose has been really trying. I hope it will be enough to endure this pandemic,” Saint said.

Ever since its creation in the Spring of 1901, Capitol Hill has been cultivating its LGBTQ history. Per The Seattle Civil Rights and Labor History Project, at the University of Washington, Seattle’s LGBTQ story is over 130 years old.

The shift began in the 1960s, when activists organized political rallies to push for same-sex equality. It wasn’t long before gay bars started opening around Capitol Hill. 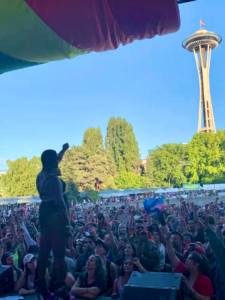 “These bars serve as community centers, living rooms, and identity points for a population across the spectrum of sexual and gender identities, age groups, race, and socioeconomic status,” said Burgess, the owner of The Cuff. “These are businesses that have often been grandfathered in through generations and have survived gentrification and biases from local jurisdictions, landlords and others.”

Bradshaw said he has personally tried his best to do frequent check-ins, and keep in touch with those in his life who may be struggling.

“We really have been just on our own surviving. We have done digital events earlier in the year, but those have died off slightly.”

Capitol Hill remained lifeless during the annual Pride Month festivities due to the coronavirus pandemic. Each year during June, the neighborhood glitters with festivals and parades. LGBTQIA+ establishments typically flourish during this season.

“We ended up celebrating pride digitally. We did a ton of virtual events and lots of digital drag content that has gone viral,” Bradshaw said. “In past years, we would dance, drink, and party. It gets wild. This year was definitely a different take.”

As businesses gently begin to reopen during limited hours of operation, the streets of Capitol Hill are slowly coming back to life.

“As with small businesses everywhere, LGBTQ businesses are stressed, and many will close,” Sen. Pedersen said. “But the community is strong, and new ones will emerge.”