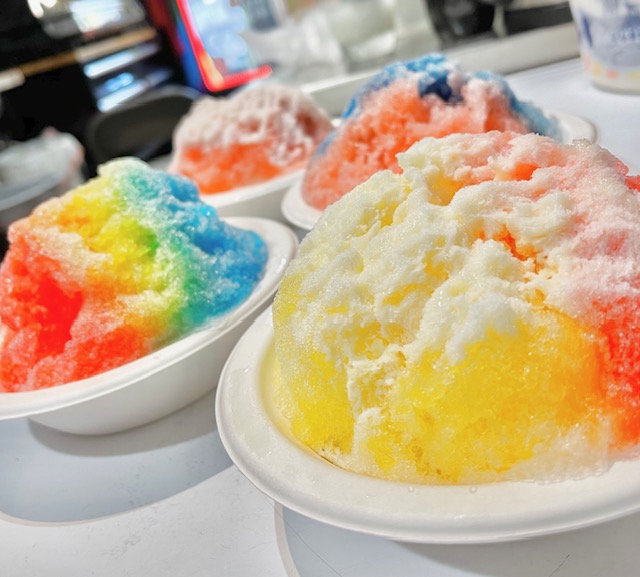 (HONOLULU) — A line forms on the sidewalk outside the small walkup window to Kell’s Koffee on a hot summer day in Corvallis, Oregon.

Tucked between a clothing store and a parking lot, a brightly colored sandwich board on the sidewalk is the only clue leading families frazzled by the heat to the frozen treat that awaits them: Hawaiian-style shave ice.

“I remember as a little kid, we go as a family and we get shave ice. So I wanted other families to bring their kids and be able to have that memory,” Dillon Kell, owner of Kell’s Koffee, told The Click. “People love shave ice. That’s so good. It’s so simple. It’s so yummy.”

Regularly featured on listicles about things you should eat in Hawai‘i, shave ice is inextricably connected to the state’s image. But as people leave the islands for the mainland, the delectable dessert has joined poke bowls, luaus, and Hawaiian shirts as yet another Aloha State export defining the “Hawaiian-style” brand.

In its most basic essence, shave ice is just what the name implies: shaved, pillowy soft ice covered in sweet flavored syrup.

Lori MacDonald, 59, grew up in Hawaiʻi not eating much shave ice. Now that she lives in California, MacDonald is obsessed. She said she eats shave ice two or three times a day whenever she’s back in Hawaiʻi.

“I just love everything about shave ice,” MacDonald told The Click. “It’s just refreshing. The different flavors, the different options, kind of like pizza. You can have pizza every day, but have a different type of pizza, right? Shave ice, you can do the same.”

Like pizza, shave ice is a translation of a food from far away — an idea brought to Hawaiʻi by immigrants, and changed by American ingredients.

Shave ice is Hawaiʻi’s take on kakigori, a Japanese ice treat. Immigrant plantation workers brought it to the islands in the late 1800s and early 1900s. It remains a favorite of locals and tourists alike. Even Hawaiʻi-born former US President Barack Obama stopped every year for his signature “Snowbama” shave ice at Island Snow in Kailua, Hawaii.

“It’s almost like frozen cotton candy. It should be able to hold its shape, but also, it should melt in your mouth. There shouldn’t be any chewing involved,” Kell explained to The Click. “It should melt and it should just be flavorful.”

A name born from Hawaiian Pidgin, this icy treat is “shave ice,” and never “shaved ice.” An exception to the name is found in Kell’s hometown of Hilo, where due to some long-forgotten linguistic twist the treat there is called “ice shave.”

Bringing the Flavors of Hawaiʻi to Oregon

Opening at the very start of the COVID-19 pandemic, Kell designed his shop around the motto “Aloha always.”

“A lot of the inspiration for the shop is to just have that sense of home,” Kell said. “I want to bring the values and experiences I had growing up and share them.”

After successfully launching poke bowls a few months after opening on March 1, 2020, Kell decided to add another Hawaiʻi icon to his menu. Needing to find something that was close to his heart that fit the theme and the small walk-up space of his shop, Kell settled on bringing one of his fondest memories to families in Oregon. 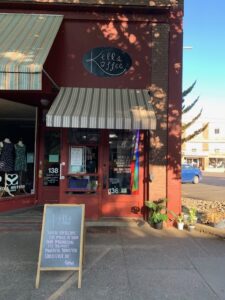 Kell said he was inspired by his hometown favorite, Wilson’s by the Bay, and wanted to recreate their iconic shave ice at his store. “Finding the right one, because I didn’t want to have something that almost you felt like, appropriative. I wanted it to be as close to what I imagined as far as texture and consistency and taste went,” he explained.

Kell, looking a little stressed, confessed that getting the perfect dome of shave ice takes practice. Some days a “small” still looks much more like a “medium.”’ But Kell completely lights up when talking about the flavors that drench the soft powder. “I’m such a flavor person; I love mixing and matching,” he said.

Testing anywhere from 50 to 60 flavors, Kell said adding the syrup is like painting. “Imagine the dome’s your white canvas and you kind of just paint along the lines,” he said. “You just see it transform into different colors, and it’s such a satisfying feeling watching the bright colors just transform the white ice.”

Kell has the “usual” Hawaiʻi flavors like coconut, bubble gum, and blue vanilla. But because he’s now in the mainland, he’s been having fun trying “Tiger’s Blood” (strawberry coconut) and “Picadilly” (cherry with sliced pickles). “We started buying things like tamarind and ube,” Kell explained. “We had tajín and chamoy, which is kind of like a sweet chili sauce.”

Kell has even let his creativity flow with the toppings. In Hawaiʻi, condensed milk, matcha powder, and li hing mui (powdered plum preserves) are typical. Kell has brought in even more toppings like chocolate sauce and cocoa powder.

Kell’s creativity has been working. He estimates that on a busy Saturday, he sells 50 to 60 shave ices in the four hours that he’s open. Prices range from $4 for a small to $5 for a large. 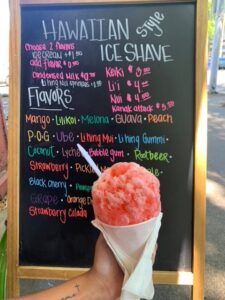 A brightly colored sandwich board showcases the variety of flavors of shave ice at Kell’s Koffee in Corvallis, Oregon. [Credit: Dillon Kell]

Shave Ice Symbolizes the History of the Islands

“Hawaiʻi is not only a place. It is also a brand,” Hiʻilei Hobart, assistant professor of anthropology at the University of Texas at Austin, told The Click. With almost 10.5 million visitors arriving in 2019, the Aloha State has leaned into this marketing — for better or for worse.

“We are responsible for protecting the iconic brand of the Hawaiian Islands,” reads a prominently placed banner on the website of the Hawaii Tourism Authority, the state agency tasked with managing tourism to the islands.

That brand includes the foods of Hawaiʻi. Modern local Hawaiʻi cuisine is a unique blend of foods influenced by and formed from the various immigrant communities that arrived in the islands, and distinct from the traditional foods eaten by Native Hawaiians.

Hobart, who has a doctorate in food studies, researches the social history of ice in the Pacific. The idea of shave ice has always been around, though Hobart said “it did not become culturally significant to Hawaiʻi local identity until the post statehood moment.”

Hobart found that from the late 1800s to about the late 1960s, newspapers barely mentioned shave ice, despite it being eaten all over the islands. Then, about 10 years post-statehood, Hobart discovered that discourse suddenly began emerging around the dessert.

To Hobart, this “sudden discourse” was a response to the “influx of outsiders from the continental US in the post-statehood moment.” The local Hawaiʻi residents needed to define their own identity.

After statehood, Hawaiʻi “becomes like that beacon of the post racial society that the US really finds appealing,” Hobart explained. “There’s just this explosion of visual rainbows that happens across Hawaiʻi.” Rainbows came to reflect the idea of Hawaiʻi as a multicultural melting pot, with the iconography splashed on buildings, university sports, license plates, and more.

“And shave ice just happens to be an edible rainbow,” Hobart added.

Hawaiʻi does have naturally occurring ice on the snow-capped Mauna Kea, and occasionally on Haleakalā. But Hobart noted in her research that Native Hawaiians were not consuming the ice on these mountains.

Shave ice as it exists today can be directly linked to the colonization of the islands by the United States. This event brought the comestible ice and cane sugar needed for today’s snowy domes and sticky syrups.

“These things converge in this really powerful way that all of a sudden makes people intensely identify shave ice as being a Hawaiʻi food, despite it being made up of things that totally reference colonialism in Hawaiʻi,” Hobart explained. As an icon of diversity and a local totem, “it works really beautifully in this narrative, and also helps local communities to distinguish themselves from this continental influx,” Hobart added.

Growing up in Hawaiʻi, thousands of miles from the U.S. mainland, makes residents acutely aware of this tension: the sincere efforts to spread Hawaiʻi local culture, and the branded version of the islands in TV and media.

Kell said it was important to ensure that his outpost presented a Hawaiʻi experience that was authentic. Avoiding the mass-produced versions so often associated with his island home was necessary to correct stereotypes and misunderstandings about the culture in which he grew up.

Although Kell is not afraid to translate his best childhood memories for a new mainland audience, he wishes he could move back to the Aloha State. But like a lot of former Hawaiʻi residents, Kell said that he moved to the US mainland because Hawaiʻi is just too expensive. “When I think about going back home and what I want to do as far as my passions go, I won’t make enough money to be able to settle down and buy a house and live my life,” he said.

Noting the growing number of Hawaiʻi transplants to Corvallis, “I want them to feel that sense of home,” Kell said. “When I moved to Oahu, I was homesick for the Hawaiʻi that I knew from Hilo. So, imagine being in the mainland, and then being totally away from Hawaiʻi. That’s hard. That’s scary for some people.”

There is often a sense of nostalgia attached to Hawaiʻi local culture, both at home and on the mainland.

At home, local culture and local food gets caught up in a nostalgia for simpler times. “For a pre-statehood time, and nostalgia for rural plantation communities that were overwhelmingly communities of color,” Hobart said. “So our parents’ generation, our grandparents’ generation, always think about and talk about how they remember simpler, ‘small kid’ times that shave ice fits into.”