The lawsuit was filed in the U.S. District Court in the Southern District of New York on October 23 — 220 days after the theaters were shut down on March 16. The plaintiffs include The Theater Center, The Players Theatre, The Actors Temple, Soho Playhouse, The Gene Frankel Theatre, The Triad, The Broadway Comedy Club, and New York Comedy Club.

These Manhattan-based, small-venue theaters have a median capacity of only 144 seats — less than most restaurants, movie theaters, schools, and other recreational facilities that have already been allowed to reopen with restrictions. The small venues argue that, unlike larger Broadway theaters, they can easily conform to current health and safety requirements established by the Centers for Disease Control and Prevention (CDC).

Catherine Russel, performer and general manager of The Theater Center, is leading the coalition’s fight. In a call on Thursday, she said, “Cuomo’s done a really good job; our infection rate is really low. I have no objection to what he’s done. But nobody’s advocating for off-Broadway theaters, so why should it be on his radar, you know? He’s got other things to think about. So this is more to get his attention as opposed to attack him.” She described the large amount of research and preparation that’s gone into readying the theater for a safe reopening, including the installation of hospital-quality air filters in all areas of the building.

The attorney for the plaintiffs is James G. Mermigis, who has had success leading similar lawsuits for gyms and restaurants over the past few months. In an email, Mermigis stated, “Each small venue theater has exceeded CDC guidelines for Covid safety. There is no reason why small venues theaters cannot open for 25% capacity in NYC.”

According to the lawsuit, with the government “failing to provide any pre- or post-deprivation review of the orders and rules shuttering their businesses, Plaintiffs are suffering substantial losses of liberty and property.” The plaintiffs claim to have lost “millions of dollars in revenue and have had to layoff at least 8,000 employees.”

Emilo Savone, co-owner of New York Comedy Club, said, “We have done everything to abide by the laws and were the first to close, and understood and still understand the severity of COVID-19… However, as every other business has had the opportunity to reopen and have a chance at resurrecting their livelihoods, we have not… Our message is very clear: Either allow us the same chance as every other business to operate during these very difficult times, or offer us real financial relief.” 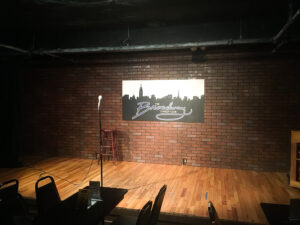 Founder of The Broadway Comedy Club Al Martin said in a phone interview, “They’ve had a lot of time now to see what the effect of indoor dining is, and the way we look at it in our world of stand up comedy, what is stand up comedy but indoor dining with one extra person on the stage?”

Both Martin and Russell also discussed the economic impact of these closures. They claim that a lack of rent payments, sales revenue, and payroll taxes from small-venue theaters takes a serious toll on the larger economic landscape of the city.

The plaintiffs are requesting that the defendants’ current executive orders become null and void. Representatives for the defendants could not be reached for comment.