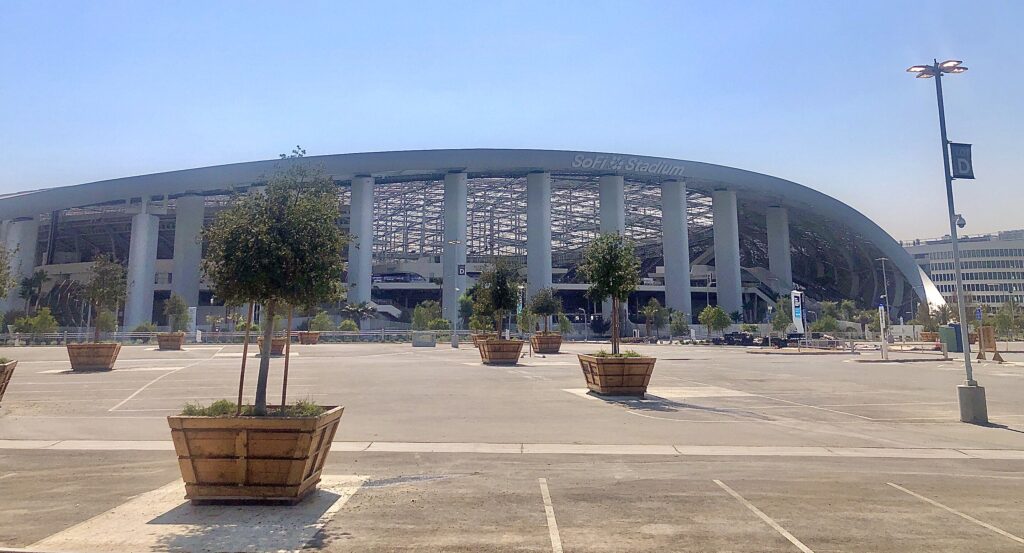 The SoFi Stadium is home to the Los Angeles Rams and Chargers.

As SoFi Stadium Opens With No Fans, Some Inglewood Restaurants are Struggling

The SoFi Stadium in Inglewood is home to the Los Angeles Rams and Chargers. [Credit: Emily Leibert]

LOS ANGELES — Last year, Inglewood restaurant owners couldn’t wait for September 2020. For four years, they’d watched construction of the much-anticipated SoFi Stadium and prepared for the inevitable boom in business as fans of the Los Angeles Rams and Chargers flocked to the historically low-income area for games.

But when the Rams took the field against the Dallas Cowboys on Sept. 13, patrons were scarce. Due to COVID-19, fans were not allowed to enter the stadium, resulting in reduced foot traffic for neighboring food establishments.

“We were excited about the stadium, but, you look at COVID-19, and you kind of temper your expectations,” said Jonathan De Veaux, a consultant for The Wood BBQ and Sports Lounge, which opened one month before the COVID-19 pandemic hit Los Angeles. “When the stadium finally opened, there were no fans, parking, concessions, or popcorn. That’s unheard of.”

SoFi Stadium’s debut marks the beginning of a significant expansion—and potential for gentrification—within Inglewood. According to the Los Angeles Business Journal, the stadium cost $5 billion to build (the highest price tag in the NFL), and will host the 2022 Super Bowl and the 2028 Olympic ceremonies. The city also granted the Los Angeles Clippers approval to build a new arena nearby, according to the Associated Press. But with one project complete and no fans in sight, the economic stimulus remains to be seen.

“When the stadium is up in full blast, I’m hoping that we get some more business,” De Veaux said. “For now, we’re not concentrating on things we can’t control.”

While De Veaux had initially considered proximity to the stadium to be a benefit, business has been challenging without an influx of fans, private events, or rentals. The barbecue joint now relies heavily on to-go orders.

Affected by similar issues is Inglewood’s Stuff I Eat, which was forced to cut its operating days in May; the local vegan spot is now open Thursday to Sunday. Bourbon Street Fish is only offering takeout orders, and House of Tacos is also limited to takeout and delivery, with no space available for outdoor dining.

“If you’re sitting there waiting on the stadium, you might be waiting a long time,” De Veaux warned.

In the meantime, The Wood BBQ plans to continue taking care of its community. On Juneteenth, the all Black and Latino staff gave away 1,300 free meals to local residents, and its doors are always open to those in need.

“We all struggle,” said De Veaux. “So, we’ve all gotta look out for each other.”