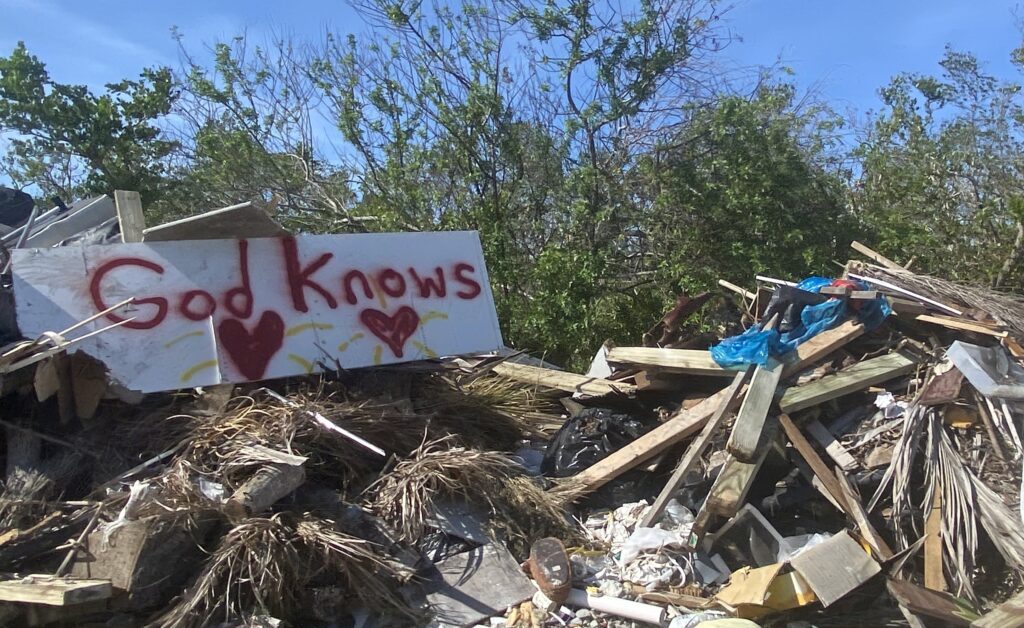 (FORT MYERS BEACH, Fla.) – When Hurricane Ian came rolling toward Fort Myers Beach, Florida in September, longtime resident Bonnie Mclaughlin, a counselor in her 70s, made the difficult decision to stay put. Previous storms, she reasoned, had never caused any damage that couldn’t quickly be repaired. Besides, it wasn’t clear that the storm would hit them at all.

But when the Category 4 hurricane made landfall, it brought with it a wave of destruction. The storm surge caused eight-foot-tall floods, displacing tens of thousands of Lee County residents.

Two months later, piles of trash and vegetative debris line the streets. Across from the beach, it’s eerily quiet except for the hum of construction. McLaughlin and her son hammer away at what used to be the kitchen in their 1920’s home.

McLaughlin is a self-described climate skeptic. But after Ian, she found herself thinking for the first time that climate change may be to blame. “Oh my God, it was pretty overwhelming. You know I have nightmares at night,” she said. Today, her home is completely uninhabitable. “This wrecks everything, the electrical, my kitchen cabinets dissolved … underneath the house is like a cesspool. The whole place is still wet. It’s not drying up.”

Scientists believe that storms like Hurricane Ian are a bellwether of how a warming climate will devastate the lives of ordinary people. The storm left a trail of destruction when it swept through Fort Myers. Florida’s estimated damages are upwards of $40 billion dollars. The global cost of mitigating climate change is in the trillions of dollars. But the real cost of the devastation is the irreparable loss of one’s home. Residents are adjusting to the cleanup, but they are also coping with a tremendous sense of loss. There’s a word to describe this phenomenon: solastalgia. The word was first coined by Glenn Albrecht, an environmental philosopher from the University of Newcastle in Australia. It’s defined as a longing for a home that you still occupy, but is already gone. And it’s the latest symptom of climate change.

“Solastalgia is the sadness that comes from realizing that treasured places are forever lost, irreparably lost due to the hands of humans. And this includes extreme weather events because they are increasing in intensity and in frequency,” said  Dr. Lise Van Susteren, a forensic psychiatrist based in Washington, D.C. She has been studying the physical and mental health effects of climate disruption since 2006. “Increases in the emissions of greenhouse gasses continue as a result of human activity.”

Uninhabitable home across from the beach. (Credit: Lilyeve Murphy Bagliani)

Albrecht coined the term after he received calls of distress from people who felt overwhelmed by the destruction occurring in the Australian Hunter Region. Expanding strip-coal mining caused above-ground land decimation and power station pollution. In Solastalgia: The Distress Caused by Environmental Change, he defines Solastalgia as the awareness of an attack on one’s home. Home constitutes a large part of our identity, resulting in a sense of isolation following the destruction of one’s home. Longing for a lost place in time is also part of the phenomenon. Solastalgia describes a lived experience of wanting to maintain the comfort of a place that, for reasons out of our control, is being transformed. The fallout of this loss can lead to physical or mental illness, and in some cases, substance abuse.

Warmlines, peer-run hotlines that provide emotional support, spiked after Hurricane Ian hit. People phoned in to talk about their feelings, which included fear, anxiety, anger and for those spared the wrath of Ian, guilt. Other impacted residents called to vent their frustrations because their area was not receiving media attention or support. “Whether you have a diagnosis or not, one in five people that you know are living with mental illness, and sometimes a combination of them,” said Beth Hatch, Collier County CEO of the National Alliance on Mental Health (NAMI.) The storm, she said, “Sparked past experiences, from children all the way up to seniors.” She thinks it’s crucial that mental health be prioritized as urgently as other recovery needs. “Calls to our warmline have increased. That’s good and bad, but we’re glad that people are reaching out.”

Not all residents reached out. In their post-Ian despair, two men took their own lives after examining the damage done. Both were over 65. Over 100 people lost their lives after wading in the floods and drowning.

HOW CLIMATE CHANGE IS IMPACTING COMMUNITIES AROUND THE GLOBE

Ian was not the first hurricane to hit Florida, and it certainly won’t be the last. According to the  Environmental Defense Fund (EDF), climate change exacerbates hurricanes, particularly in Florida, the second hottest state in the U.S. In fact, Miami is the most vulnerable coastal city in the world, according to the Organization for Economic Co-operation and Development (OECD), in part due to its high built-out density and large population. In the near future, the city could be permanently submerged under water because of low-lying coastlines and rising temperatures. Preventative measures may be costly, but activists argue that no cost is greater than what could happen without effective, impactful, and timely action to curb climate change.

A changing environmental landscape can impact local residents’ mental health, causing  “trauma from weather and climate extreme events, and loss of livelihoods and culture,” according to a report by the Intergovernmental Panel on Climate Change (IPCC.) 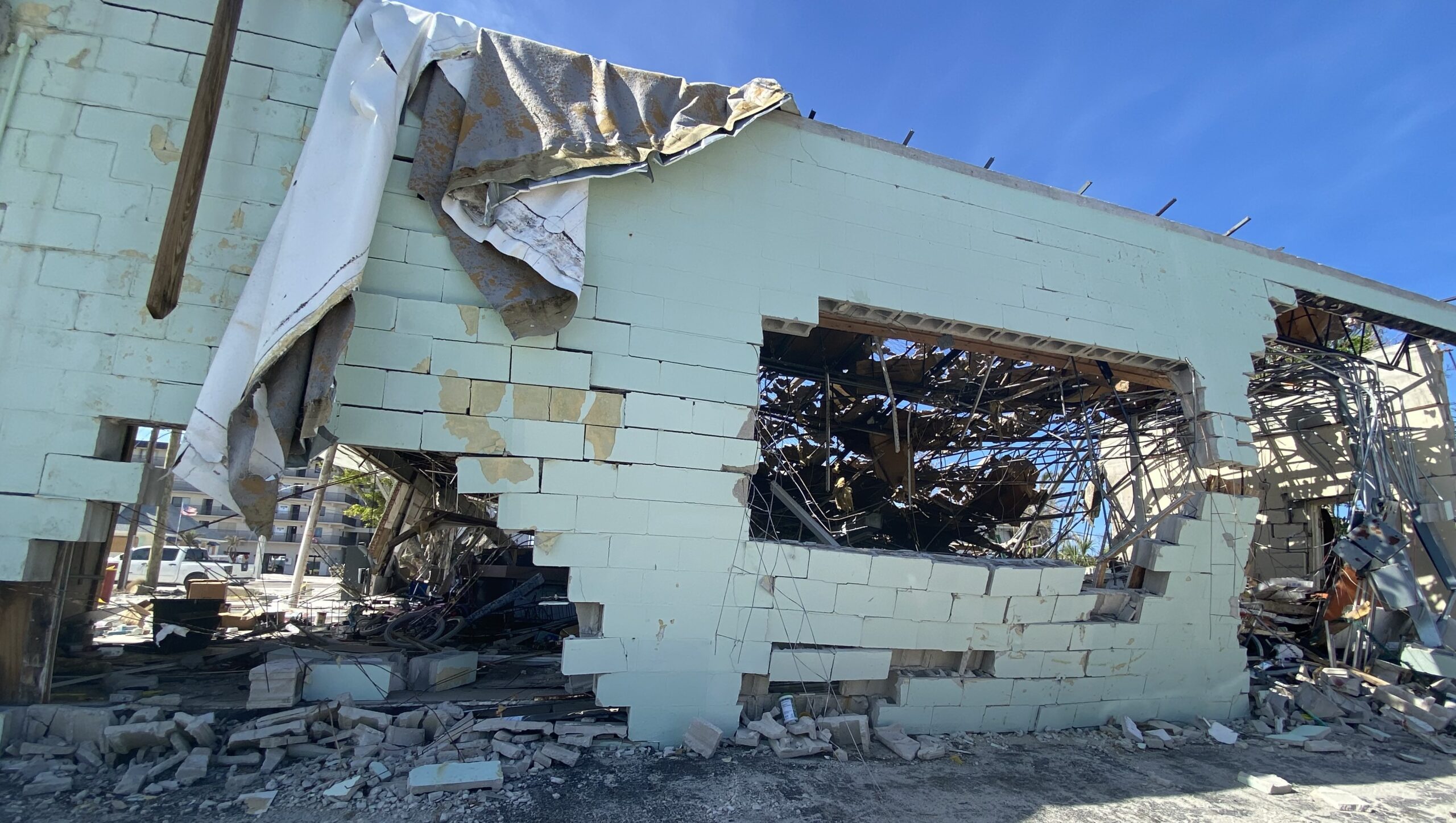 “When you look, for example, at Pakistan, a third of the country is underwater there,” said Dr. Van Susteren. Communities with little infrastructure are forever lost. She added that the sense of grief caused by the upheaval of homes, land, and tradition is more intense than in developed countries. In the future, she warned, “we’re gonna have millions of people who are living in areas that they will have to leave.”

Such displacement is an ongoing factor for areas undergoing climate crises, and it favors the wealthy minority. “Those who are on the lower end of the socioeconomic pole are hit first and worst,” explained Dr. Van Susteren. “And that’s important to know because, people in privileged societies in countries generally that are developed, are in better shape.” When cities rebuild, prices go up. Affordable housing is frequently replaced with expensive condos, as has been the case in Florida. The forfeiture of a home and a place in time is what triggers Solastalgia. A study by the IPCC found that climate change had a greater impact on long-term internal displacement than local or international migration. Coastal areas like Florida are expected to become displaced by rising sea levels.

The result is a so-called “green gentrification,” that privileges wealthy urban residents. In Miami-Dade County, Florida, researchers found that sustainable rebuilding increased property values. The IPCC findings agree with Dr. Van Susteren’s belief of a future refugee crisis due to climate displacement. New construction must be up-to-code, making the cost of rebuilding much higher.

Local Fort Myers Beach resident, singer and songwriter Steven Martin, had been living in his home for 24 years. He said he may leave in a year as the character of the area is changing. In the last few years, cottages on his street were bought and replaced with more expensive housing, converting the dynamic of his community from charming artistic bungalows to expensive resort hotels and McMansions. Martin is witnessing a transformation that will forever impact the sense of community he holds, knowing it’s slowly being removed.

“It seems the storms are getting bigger and stronger… Yes, I would call that climate change.” He weathered the storm in his two-story house with his wife, kids and two neighbors, witnessing the roof across the street blow off and land next to his house. “The water was probably ten feet deep at the time.” As a songwriter, he wrote a piece called “What About My Heart,” describing the heavy weight of emotions carried after the storm. “When you work so hard for so many years to build a life and make it come true … and then see it all washed away in an instant, it creates a very big hole in your heart.” 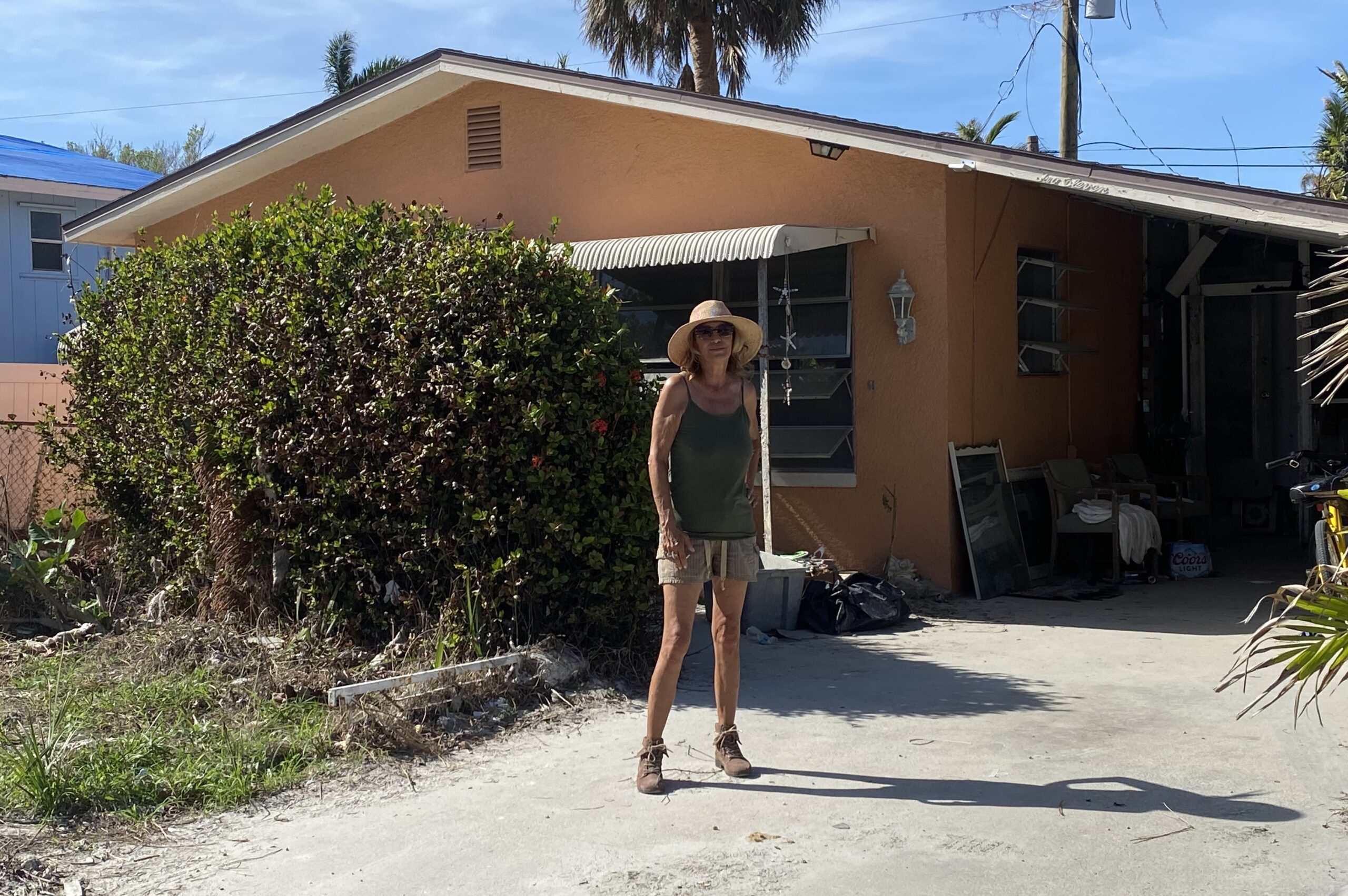 Resident Dawn Winston, who rode out the storm with her husband of 40 years in their home, paid the ultimate price. “My husband lost his life three days after the storm.” She added, “It was like having a washing machine hit the interior of my house. Everything swirled around and broke up.” She said her husband’s death was caused by contaminated waters that gave him sepsis.

As for whether climate change is responsible for her losses, Winston replied with an immediate “Yes.” But she refuses to suffer through a bout of solastalgia, insisting that as soon as her home is bulldozed, she will rebuild. “I’m from New York. I’m tough. I can do this.” 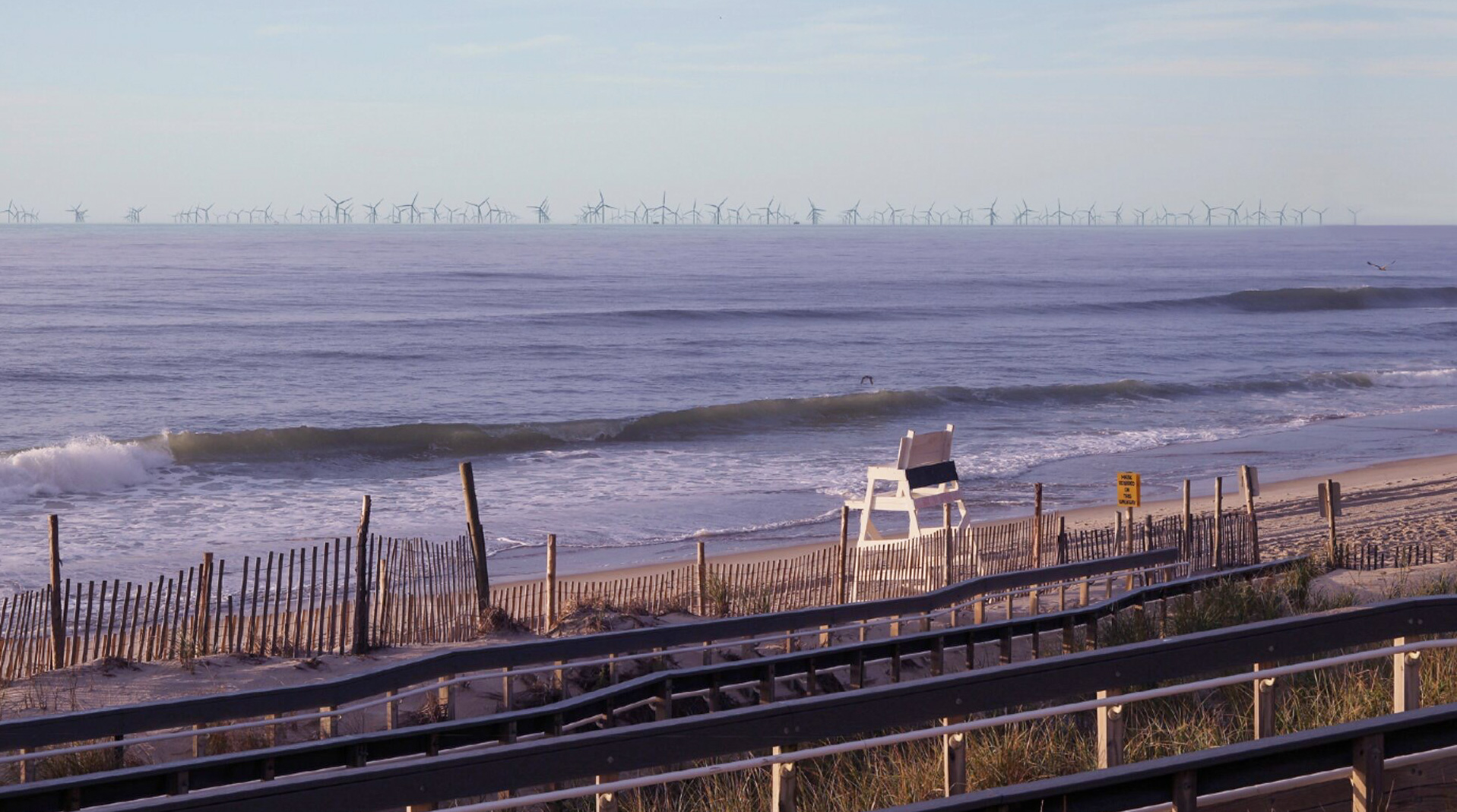 (Long Beach Island, N.J.) – The path to clean and sustainable energy in New Jersey is no longer a thing […]