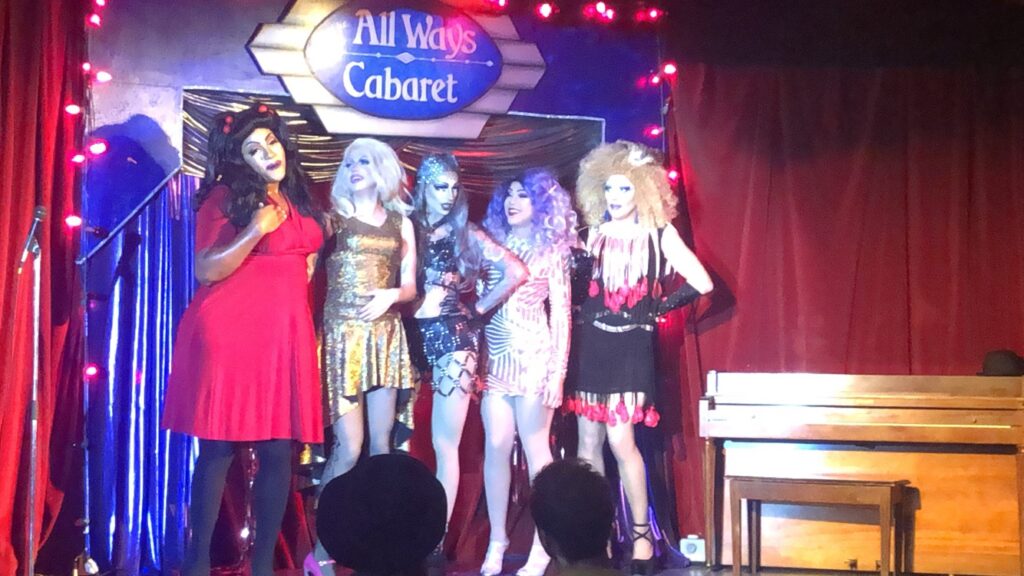 The AllWays Lounge in New Orleans hosts daily and weekly performances by locally renowned drag queens, burlesque dancers, and other performers who largely identify as a part of the queer community. Pictured here is a group of performers before the pandemic began. [Credit: Tess Riley]

(NEW ORLEANS) — Local filmmaker Stuart Sox documented the staff and performers of New Orleans’ beloved AllWays Lounge as they navigated the challenges of a global pandemic. His experience capturing the venue’s creative efforts to survive began with the ingenious AllWays Lounge Peep Show, a coronavirus-safe invention allowing performers to continue working and entertaining from behind a clear barrier while supporters enjoyed socially distanced drinks outside.

Sox’s project, “I Love You, AllWays,” recently reached its fundraising goal on Seed&Spark, which means Sox can turn his footage into a documentary film. Sox’s previous work includes To Decadence With Love, Thanks for Everything! which follows two local drag queens throughout Southern Decadence, one of New Orleans’ oldest queer celebrations. His latest project continues to highlight the voices and experiences of historically marginalized communities. The AllWays Lounge is a safe space not just for drag queens, but also for queer performers in burlesque, cabaret, comedy, music, and other genres.

When Sox began to document the creativity of this venue’s performers and staff, he had no idea he would be filming (and experiencing) the effects of the pandemic for an entire year. During filming in 2020, he and his subjects had to evacuate the city due to Hurricane Ida, revealing another level of resiliency demonstrated by this uniquely New Orleans community.

Sox spoke with The Click about the challenges of creating a documentary amid so much unexpected upheaval.

The Click: How did you balance throughout the film telling the stories of the individual performers who were affected, but also highlighting struggles that AllWays faced as a business during COVID-19?

Stuart Sox: That’s kind of difficult to say at this point because I haven’t even really started editing but the way it’s gone so far is I filmed at The AllWays Lounge doing documentary-style stuff through all of last year…I tried to follow a few different performers as well as staff at The AllWays Lounge, and I’m only one person. In an ideal world, I would have multiple people on my crew, but at the same time, I feel like that also would’ve been more difficult. I may not have yielded better, or as good results because I feel like I really got to know all of the amazing individuals that I was documenting and developed close relationships with them.

I think that balance between focusing on the individual stories versus the more global pandemic, being an artist during a pandemic and trying to make ends meet, I think the balance will be found once the film starts to come together in editing.

The Click: As you’re documenting all the challenges that the business is facing, the personal challenges of the performers, how did that impact you and how were you able to take care of yourself while giving a voice to people that are going through similar pandemic struggles?

Sox: [B]eing a documentary filmmaker can be a little bit isolating at times, and I guess that’s even more magnified with the pandemic and just spending so much time editing or reviewing footage. Before the pandemic, I would spend those long amounts of time editing and reviewing footage, but then have time to see people and go do things, and I didn’t really have that for a really long time. So I felt like the isolation was an even bigger factor for quite a bit.

But on the other side, I feel like for me being a filmmaker I’m lucky in a sense because my work went up in demand as a result of the pandemic. Not just in a sense of having these really meaningful stories to make a documentary about, but also just the need for video content and virtual content.

The Click: Were you still filming when Hurricane Ida hit?

Sox: I didn’t plan to be filming for this for an entire year…I thought looking forward to what the end of the film might be would be that everybody’s going to get vaccinated and then we’re going to have this triumphant return to having indoor shows at The AllWays Lounge. And that happened. And it was great. And we thought everything was fine, and this was the happy ending, but then we had the [coronavirus] Delta variant screw everything up and [it] felt like everybody was back at square one. And shortly after that, there was Hurricane Ida…I had a lot of the main characters, collaborators, people that are in the film, kind of film themselves as they were wherever they evacuated to…The people that are part of the film believe in it so much, and they were so generous helping me keep the film going in such a difficult time.

The Click: Besides doing next-round interviews for the film, I saw you still need to do an original score. What are the other main pieces that you’re working on right now?

Sox: The main pieces I’m working on right now are of course the fundraiser and doing these interviews. And then the task of reviewing footage is so mighty. I’m happy that I have so much to work with. It’s better to have more than not have enough, but I’m reviewing like two or three folders of footage a night… I want this film to be really, really good, and I know that it will be, but I know that in order to do such an incredible place like the AllWays Lounge and the incredible people that are in the film justice, I want to do everything right. I want to have a beautiful score, have a really, really talented color grader, [and] professional artwork… I keep saying that if I have a rough draft of the film done by the end of the year, that would be a pretty solid win. Then at some point in 2023, it would be great to have a premiere at a festival somewhere.