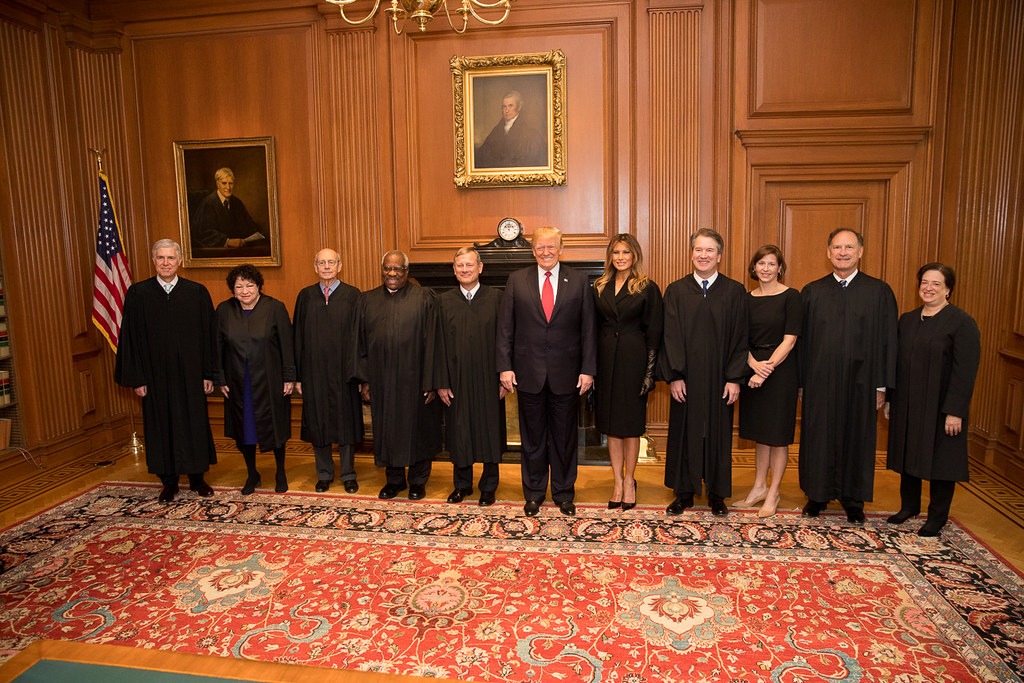 Mark Joseph Stern, an expert on law and the courts, is a staff writer for Slate magazine, a contributor to The Wall Street Journal and The American Prospect, and a regular guest on radio and television shows such as Amicus with Dahlia Lithwick and The Mehdi Hasan Show.

Based in Washington, DC, Stern holds a Juris Doctor degree from Georgetown University Law Center. He covers courts and the law, with a specific focus on human rights, criminal justice, and the Supreme Court. Stern is the author of American Justice 2019: The Roberts Court Arrives.

Amidst sweeping Supreme Court decisions which seek to alter American democracy in the twenty-first century, The Click caught up with Stern to learn more.

I asked Stern about his recent piece titled, “SCOTUS Just Blew Up the Voting Rights Act’s Ban on Racial Gerrymandering,” and to talk about the court’s history of attacks on the landmark legislation. Stern explained that previous decisions essentially removed all but the VRA’s ban on racial gerrymandering. The ban had made it illegal for states to engage in redistricting that packs the bulk of its minority voters into fewer districts, as such tactics clearly diminish their political power.

“That’s exactly what Alabama did in this latest round of redistricting…Alabama’s congressional map is just a quintessential racial gerrymander. The state is almost a third Black. Almost a third of the population is Black, but under this map, only one of seven congressional districts even has a majority Black population.”

In a clear and unanimous decision, three district court judges ruled that the redistricting was illegal under the VRA, and must be redrawn. However, the Supreme Court “stepped in and blocked that decision,” ruling that Alabama could go ahead with the new district maps for the 2022 elections and beyond.

I then asked Stern about a series of decisions that have eroded the establishment clause and strengthened free exercise, a trend that is endangering the separation of church and state. Stern explained that SCOTUS has begun leaning into the idea that “neutrality toward religion is hostility toward religion.” Decisions such as Trinity Lutheran v. Comer have moved the goalpost of free exercise, he said, suggesting that the government is actually required to “fund and subsidize the exercise of religion.”

“We are moving to a place where minority religions and people who do not have religions…will be able to look at their government and feel, quite rightly, that their government is forcing them to subsidize religious exercise that violates their own freedom of conscience,” he said.

We discussed other major cases looming before the Supreme Court. One is the landmark Roe v. Wade, which Stern believes will be overturned in June, removing federal access to abortion under the Constitution. Another is a preemptive decision on the authority of the EPA to regulate emissions, a ruling against which could hobble virtually all such government agencies. Such a decision could leave industry largely free to police itself with regard to environmental, health, safety, and consumer regulations, much like in the infamous Gilded Age.

According to Stern, the high court wants to dismantle the system of government in which Congress passes laws and federal agencies implement them, preferring instead to have “unelected, life-tenured judges decide the real meaning of these laws and prevent these democratically-accountable agencies from doing anything that a judge doesn’t approve of.”

Lastly, I asked Stern to weigh in on court expansion:

“I am for it because there’s really no other way to stop this coming conservative legal revolution. It’s going to be a bloodbath, and it’s going to be a partisan bloodbath. There is no real structural reform that can work unless you expand the Supreme Court first, because every other structural reform that Democrats attempt will be kneecapped or struck down entirely by SCOTUS. So that’s why I am in favor of expanding the court.”