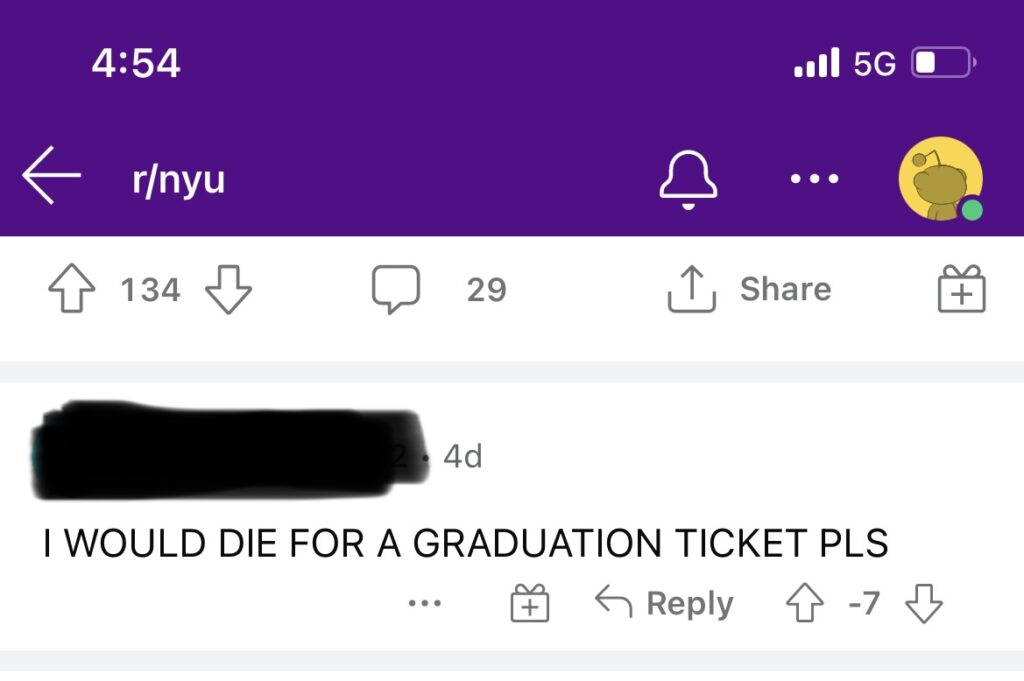 A Taylor Swift fan attempts to buy a commencement ticket on the NYU Reddit page.

(NEW YORK) – Graduating NYU students are allegedly selling their commencement tickets for hundreds of dollars to fans of singer-songwriter Taylor Swift, who is set to give a speech and receive an honorary degree at the event next month.

Fans have been pleading for tickets on Twitter and across multiple NYU Reddit forums. Some offered as much as $500 for a seat, according to threads reviewed by The Click. Others claimed they were willing to “pay very generously.” Some users offered to pretend to be there in support of the student who sold them a ticket. 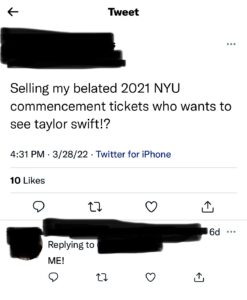 A Twitter user alleging to be an NYU student attempts to sell tickets.

The Click pored through dozens of NYU Reddit forums and Twitter threads and found numerous examples of accounts claiming to be students selling their tickets at high prices, as well as fans clamoring for the tickets.

The Click could not independently confirm that the accounts belonged to actual NYU students.

“I WOULD DIE FOR A GRADUATION TICKET PLS,” one Reddit user wrote.

Caitlin Hornik,  an NYU journalism master’s student who plans to attend the commencement, said a Swift fan recently reached out to her via text asking for tickets. However, that fan did not offer money in the exchange. (Editor’s note: Hornik is also a contributing writer at The Click.)

“If I had extra tickets, they would not be going to Taylor Swift fans,” Hornik said. “I paid tens of thousands of dollars for this degree. It’s not like a Taylor Swift concert. No, we are there to celebrate my hard work.” 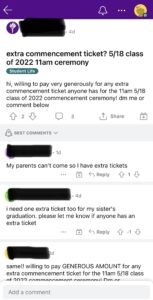 The Click reached out to NYU for comment but did not hear back by press time. However, the school’s commencement site posted a statement last week about the selling of tickets.

“NYU strictly prohibits the direct or indirect sale or auction of All-University Commencement tickets,” the commencement site now says. “Tickets are free and available only to eligible candidates in the Classes of 2020, 2021, and 2022 and their guests.”

Swift is receiving an honorary doctorate in fine arts at the 11 am ceremony on May 18, according to NYU’s site. The event will take place at Yankee Stadium in the Bronx.

A second commencement for 2020 and 2021 graduates who did not get an in-person ceremony will start at 6 pm the same day. Their commencement speaker will be prominent disability-rights advocate Judith Heumann.

This past semester, NYU offered a course to study Swift’s work. The class was taught at NYU’s Clive Davis Institute of Recorded Music and covered Swift’s career, song-writing, musical influences, and feminism.