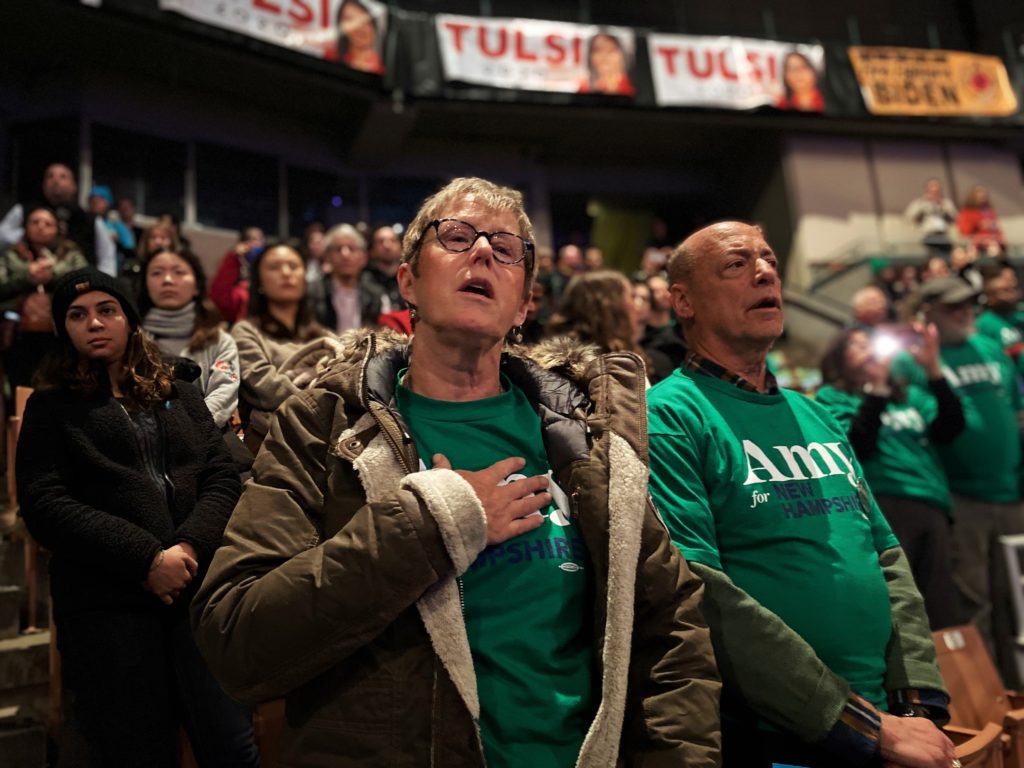 A Klobuchar supporter at the Democratic Party dinner on Saturday night in Manchester. Photo by Grace Cong Sui

Manchester, N.H. –  Democratic supporters from all over the country braved the cold Friday night to attend a debate four days before the presidential primary here.  Many were busy advocating for candidates who shared their views on healthcare, gun control, immigration, climate change, education, and other issues, such as the tariffs introduced by President Donald Trump, which are very unpopular among some New Hampshire voters.

According to the U.S. Chamber of Commerce, the ongoing trade war has threatened $415M in state exports to China and Europe with a potential impact on 183,900 New Hampshire jobs tied to international trade.

Jeffery A. Burgos, a supporter of Democratic candidate Pete Buttigieg, used to work in the marketing department of a solar energy company. He recalled how his customer base plummeted when Trump implemented tariffs on aluminum and steel, hiking the cost of solar panels. This harmed the solar industry resulting in a loss of more than 62,000 U.S. jobs, according to the Solar Energy Industries Association (SEIA).

“I talk to homeowners about solar and the potential for it, but I do get that question sometimes about how it how those tariffs or even the threat of them affects how affordable solar is,” he said. “It does affect people’s … feeling that they can access solar energy affordably.” With fewer potential consumers, Burgos’ sales declined.

Burgos said the U.S. trade policy cannot be ignored and should be taken into consideration when it comes to the primary vote Tuesday. Trump’s trade policy has been a “sledgehammer” to people’s lives,” he said.

“I am really against those tariffs because I understand kind of the sentiment behind trade being out of balance, but it requires a more thoughtful process. That’s why I’m supporting Pete because he’s a lot more thoughtful with everything that he takes on, including the trade policies,” he said while holding a Buttigieg sign.

In New Hampshire, manufacturing is one of the main drivers of economic growth. When the Trump administration imposed tariffs on aluminum and steel on March 1, 2018, steel prices increased by 30 percent, according to the New Hampshire Department of Transportation, raising costs for local manufacturers.

The two-year trade war between China and the U.S. and tariffs took a toll on New Hampshire not only among small businesses but also the working class. John Brown, manager of a local restaurant in Manchester, said he had to reduce staff hours to maintain profitability when the government announced an increased tariff on farmers’ products such as lettuce. 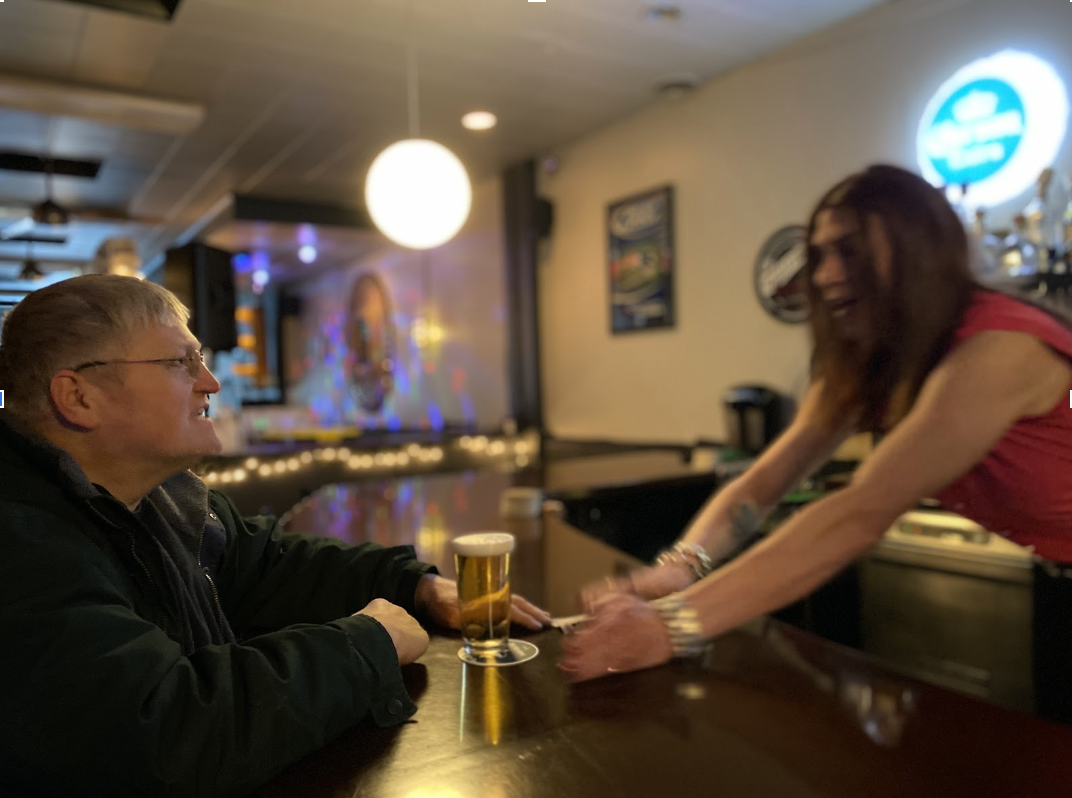 John Brown talks politics in a Manchester bar the weekend before the primary. Photo by Grace Cong Sui

“The price of lettuce … skyrocketed, and you get lettuce that’s honestly, like, rusted. I get charged double for a head of lettuce. But the quality is still not there either,” he said.

Brown said he was being charged $60 for 24 heads of lettuce, a historical high. But he had to throw half of the lettuce away.

“How was there any profit, especially for small businesses? It’s not like big corporations, you know? I mean Walmart may get a better deal for lettuce because they can get thousands of cases. But a small business has to go to its vendor, and this is hard to survive,” he said.

Brown expressed his disappointment with the political process going on around him this weekend and said his vote is too small to matter. 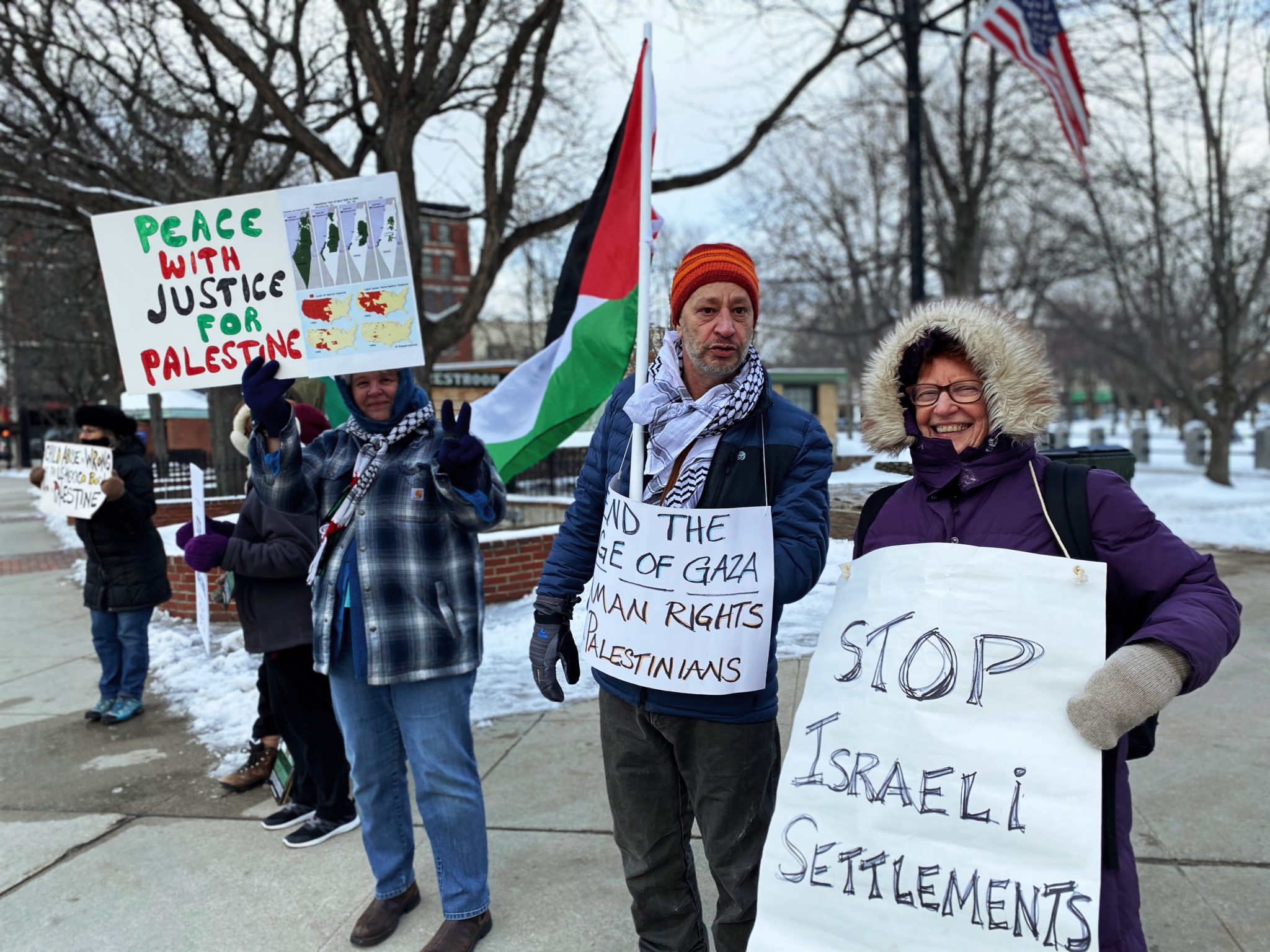 Clare Sheridan, a Democrat, is a retired librarian. She said she had not decided who to vote for in the primary, but she will vote finally for whoever is against Trump.

“Two years ago, I needed a refrigerator, so I was pricing them. They had all gone up ( in price) because of the tariff because most of them are made in China and Mexico,” she said. “Donald Trump wanted to move manufacturing factories back here. It’s not going to happen, forget about it. He’s deluding the working class into thinking these jobs are coming back, then it’s not!”

Sheridan, who relies on savings and Social Security for her income, expressed anger over the current political situation. “I can’t stand Trump. He’s making my blood pressure go up.” She believes the tariffs are not reasonable and useless. Instead, she would rather have taxed raised to help those living in poverty.

“Absolutely, it’s going to affect my vote. If I had to pay more for a product, and I knew [it would] give more money to the poor, I’d do it. I would not object, or maybe taxing me to give unions more power at something like that. I would not mind paying more. But I would not pay more for something stupid,” she said.

Sheridan’s friend, Wafic Faour, who voted for the Green Party in 2016, has different political views but agrees with Sheridan on trade policy.

“He (Trump) didn’t choose a diplomatic channel, you know, he did it as a cowboy,” Faour said. “He thinks by doing that he can put the Chinese down, not allowing them to become a powerful country. Well, the ship sailed a long time ago,” he added with Sheridan laughing next to him.

On Saturday night, before the start of the Democratic Party fundraising dinner, Trump supporters gathered in front of the Southern New Hampshire University Arena where the dinner took place, aiming to undermine their Democratic rivals. Temperatures that dropped down to 10 degrees below zero, did not cool their stance. When asked about the trade war issue, one supporter said he stood with the president on the issue.

“I am not sure about the tariffs to be honest, because I think they take a little bit of time to back up…I think certainly some industries are really affected by it,” said Steve, a Republican supporter who did not want to give his last name. “Sometimes you have to endure a little bit of it to have benefit. Nothing for free.”

Steve said he didn’t know if the trade wars had affected the affordability of some materials such as solar panels, but he supported Trump’s position. “He is our president number one, and I think what he is doing are good things for our country.”

Democrats spar over trade during debate

Trade was a frequent topic among the seven Democratic candidates during the Friday debate. Although all support a more strategic approach to world trade, a split emerged among the debaters concerning the recent USMCA trade agreement with Mexico and Canada, approved by the U.S. Senate and signed into law on January 29. While both Sen. Amy Klobuchar of Minnesota and Sen. Elizabeth Warren of Massachusetts voted for the approval, Sen. Bernie Sanders of Vermont did not join them. He criticized the deal saying it didn’t even include a single word related to climate change. Furthermore, he warned the legislative agreement would lead to the outsourcing of American jobs to Mexico. 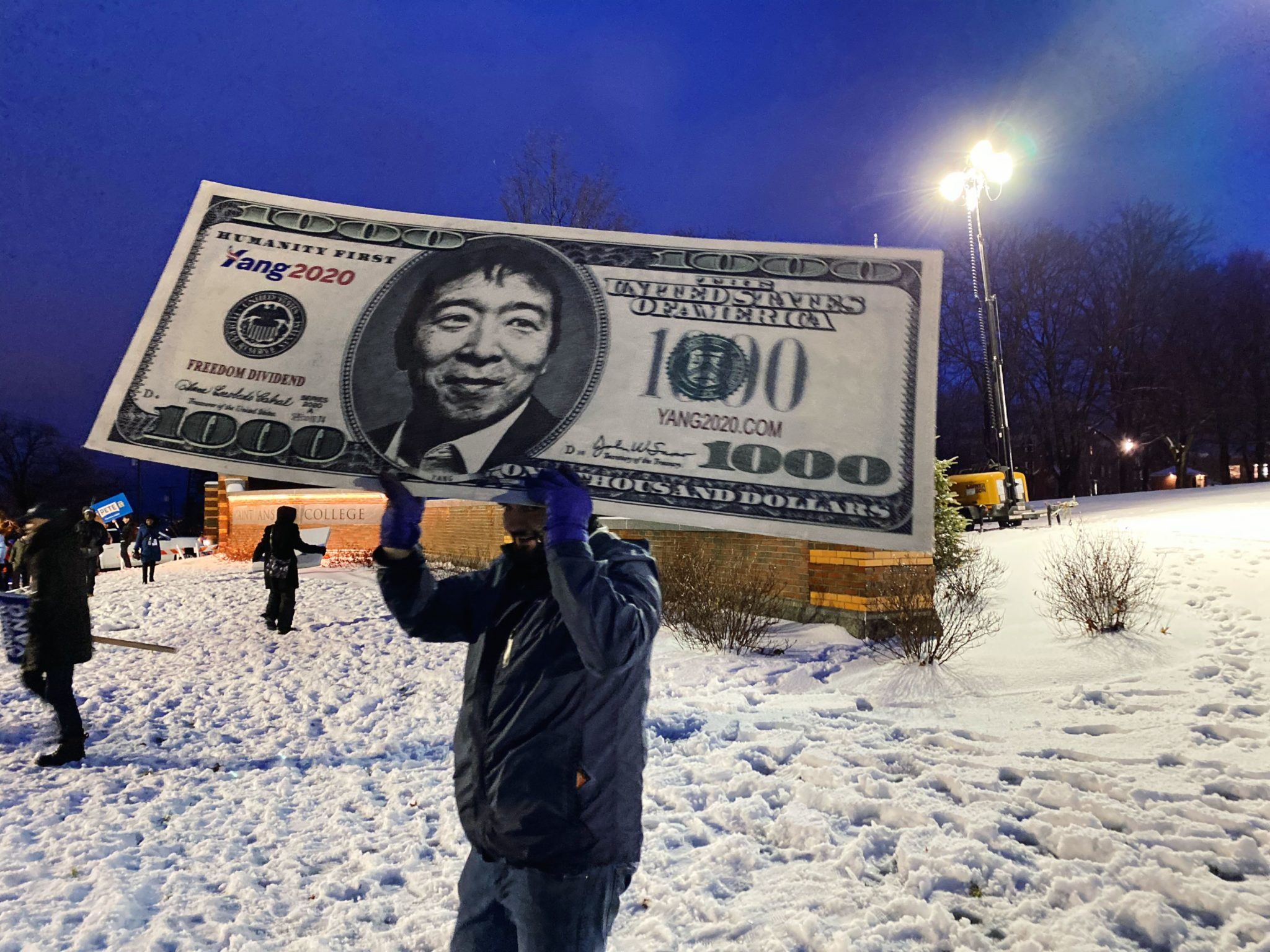 Another candidate, Andrew Yang, won a big round of applause at the party dinner on Saturday night when he addressed the topic of trade policy.

“It happened here in New Hampshire earlier, almost 12,000 manufacturing jobs (lost) in the northern part of the state. And when you go to those towns, mall closed, the shopping center closed, people left, the school shrank. And the town has never recovered,” he said tying the loss of jobs to U.S. trade policy. 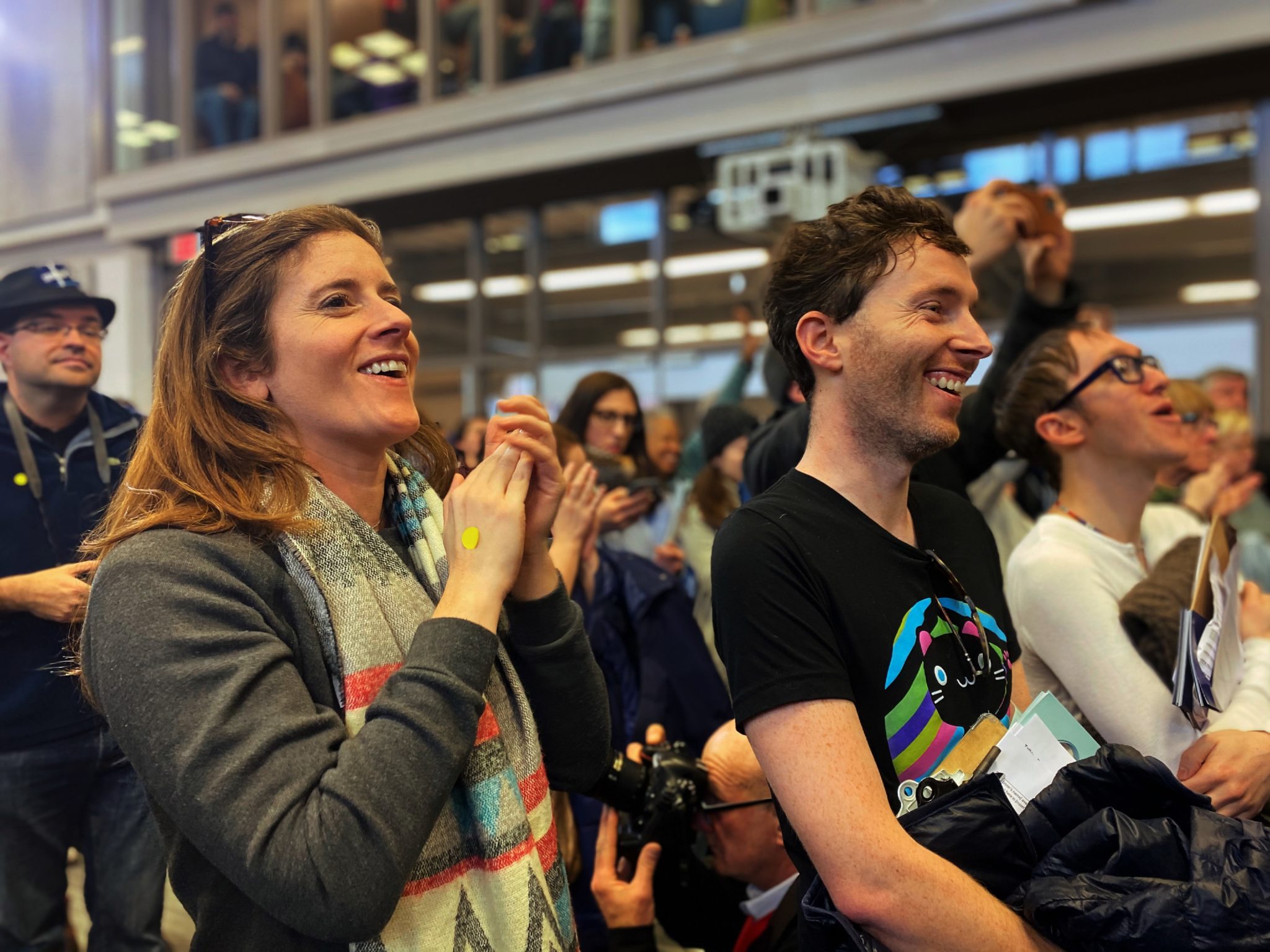 Warren also addressed the issue in  Iowa. She said the tariffs imposed by the Trump administration hurt farmers, but that the new trade deal would be “a modest improvement.”

At Warren’s canvassing kickoff Saturday, John Maguire was waiting in a line to get in. He said he felt the price of housing materials bought from Home Depot has gone up and it was ridiculous.

“We live in a world economy…it should be free trade, and if it was being used as political leverage, it’s even worse,” he said.

New Hampshire residents like Maguire will have a chance to express their views on trade and other issues when they head to the polls Tuesday.