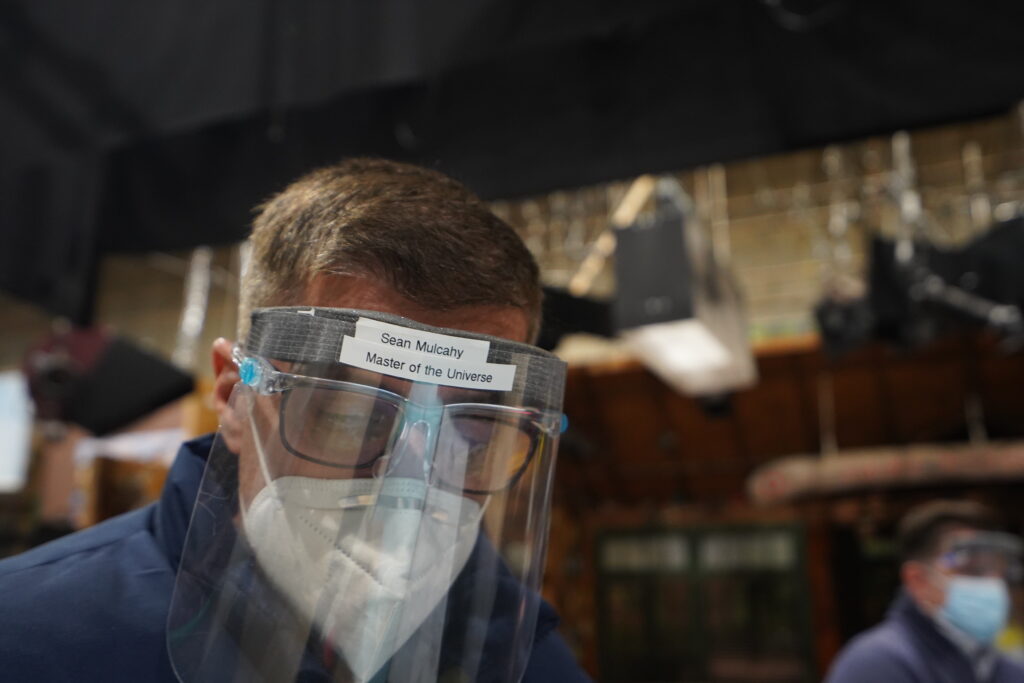 Tenacity in Tinseltown: Assistant Director is a source of constancy in an industry that’s become even more unpredictable

(LOS ANGELES)—Settling in a plastic folded chair, Sean Mulcahy looks around “New York Street.” It’s a common trope—a facade available on several television lots around Los Angeles—and almost feels like the real thing. But it’s show business—a facade of a city miles away, built on the CBS Studio Center Radford lot. Though the buildings aren’t real, the livelihoods tied to the lot are. It’s Mulcahy’s job as 1st A.D. on Disney Channels’ Bunk’d to make sure the show can continue to exist safely, even in the midst of a pandemic.

The 1st Assistant Director, or A.D., is not as prominent or well-known a role as the director or producer, but in addition to organizing the crew and setting the production schedule, he or she is responsible for the safety of everyone on set. Filming during the pandemic has piled on more pressure to the entire cast and crew, and even though specific COVID-19 health monitors have been hired to supervise testing, protocols, and disinfection measures, the security and well-being of every person falls on the shoulders of the 1st A.D.

“Does it mean we’re doing stunts every week?” Mulcahy asked himself. “No, but I’m responsible for everybody’s safety on stage.”

A few stages down from the New York set is the fictional setting of Moose Rump, Maine, where the idyllic Camp Kikiwaka exists to fans of the show Bunk’d. One of the most popular shows currently on the Disney Channel, Bunk’d is in its fifth season and beat previous Disney live action show records set by That’s So Raven and Hannah Montana. Mulcahy has been the 1st A.D. for the show since Season 4. After more than 35 years, dozens of shows, and multiple writer and union strikes, this last year has given him the most anxiety. Since the start of the pandemic, “I have been waking up at 4 in the morning,” Mulcahy said.

Before the novel coronavirus emerged, Mulcahy’s biggest worry was when a child actor would turn into a pumpkin: industry-speak for when she or he hits the maximum number of hours a minor can work on set. Then the pandemic broke out and just acting near someone else was so dangerous that production had to be shut down completely. Mulcahy, along with the hundreds of thousands of folks in the television and film industry, was left wondering when production would come back and whether he would be able to keep it safe when it did.

When Bunk’d resumed shooting in early September, Los Angeles County had already reached 248,821 cases and 6,030 COVID-related deaths. Several shows on the CBS lot have been forced to shut down because of outbreaks of the virus. A show on a nearby stage had over two dozen positive cases in multiple departments—in just one week. Bunk’d, however, has managed to remain COVID-free.

Deborah Donovan Greaney, the 2nd A.D., is Mulcahy’s right hand; since they met in 2015, both have worked on multiple shows in which they have dealt with emergencies.

In 2019, there was a threat of an active shooter on the Netflix lot. “We both handled it very calmly,” said Greaney of the scare. “Earthquakes, fires, active shooters, we’re responsible for making sure that everyone’s safe. We’re making movies—that’s great. But as long as everyone gets home safe, to us, that’s the most important thing.”

Adjusting to COVID protocols has been a challenge for workers whose jobs require their presence, and television crews are no exception. At the start of each work day, Mulcahy along with every Bunk’d cast and crew member, must check in with a COVID health monitor and receive a wristband and Disney-approved mask. Monitors administer testing three times a week. Testing is administered three times a week. The writers and many of the production team work remotely or stay in office bungalows to minimize the number of people on the sound stage. At production and network run-thrus, which would have been crowded before the pandemic, the set Production Assistant, or P.A., now follows the action with a laptop so the writers and network executives can watch via Zoom. 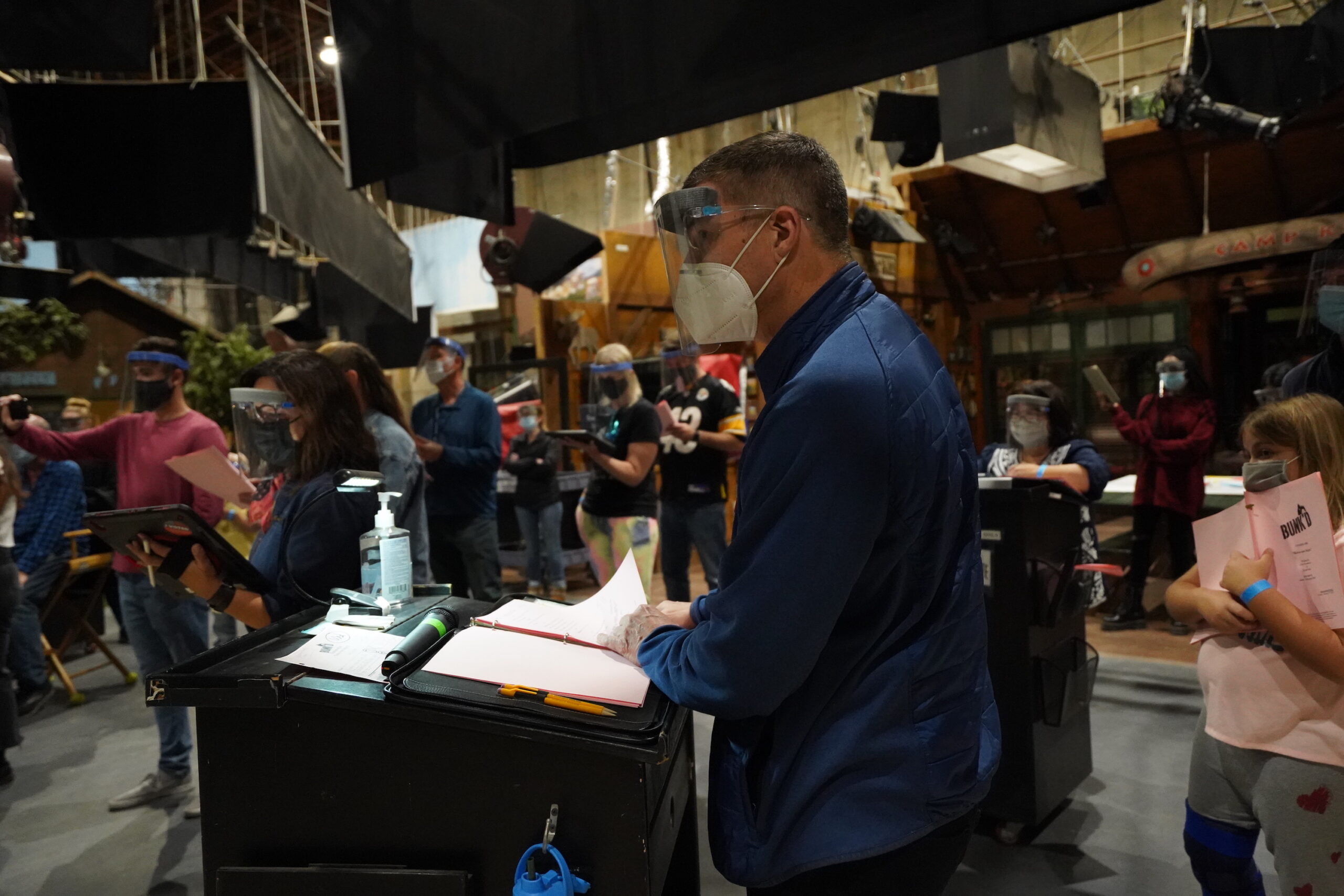 During a Disney network run-thru. All attendants socially distanced. Crew was pared down to the smallest number possible; non-essential production, like the writers who haven’t been on set since the start of the 5th season, have been Zooming into work. [Photo: Lilian Manansala]

Health guidelines have necessitated a sharp reduction in background actors, but those who do come to set must arrive a week ahead for COVID testing. Greaney and Mulcahy work with the wardrobe and make-up departments to schedule cleaning buffers and time to disinfect every article, accessory and station before the next actor uses it. When Bunk’d came back after a 6-month shutdown, food and beverage (known in the industry as craft services) served food outside, but now have a little cafe corner on set. Food services on the lot—from craft, the commissary, and catering services—have eliminated all buffets and pantry set-ups. Meals all come sealed and pre-packaged. No crew member may drink or eat on stage. If they do hydrate, they must drink from a straw under their mask, face shield still on.

On shoot days, the make-up and hair departments as well as stand-ins are stationed outside, where risk of transmission is lower, and they can keep tabs on what’s going on stage via TV monitors. They faced 90 degree weather last fall and 50 degree weather this past winter, huddling under heat lamps. To minimize the time that main cast members  spend sans mask, the set P.A. stands nearby with a cubby set-up, keeping each actor’s mask tucked in a pastry bag along with a labeled water bottle and disinfected props.

Mulcahy starts filming days with a warm welcome and review of safety protocols, clarifying any stunts or complicated special effects. But since COVID, his speeches carry a more urgent tone—not to mention a heightened consideration of time.

“The A.D.’s job of scheduling is completely different now,” said Jody Margolin Hahn, a director who has known Mulcahy since he started out as a production assistant on the set of Gimme a Break in the 1980s. ” You have to schedule in mask relief breaks so that people can go out and actually take their mask off for a few minutes and breathe, drink water and maybe have a snack. So that’s additional time that, when you add it up over the day, could be a couple hours.”

Originally from New York, Mulcahy got his start in entertainment while working security for productions like 60 Minutes, CBS’ NFL Today, and Walter Conkrite’s show before moving to Los Angeles in 1984. Over forty years in Hollywood, he’s worked as everything from page and production assistant to assistant director and director. 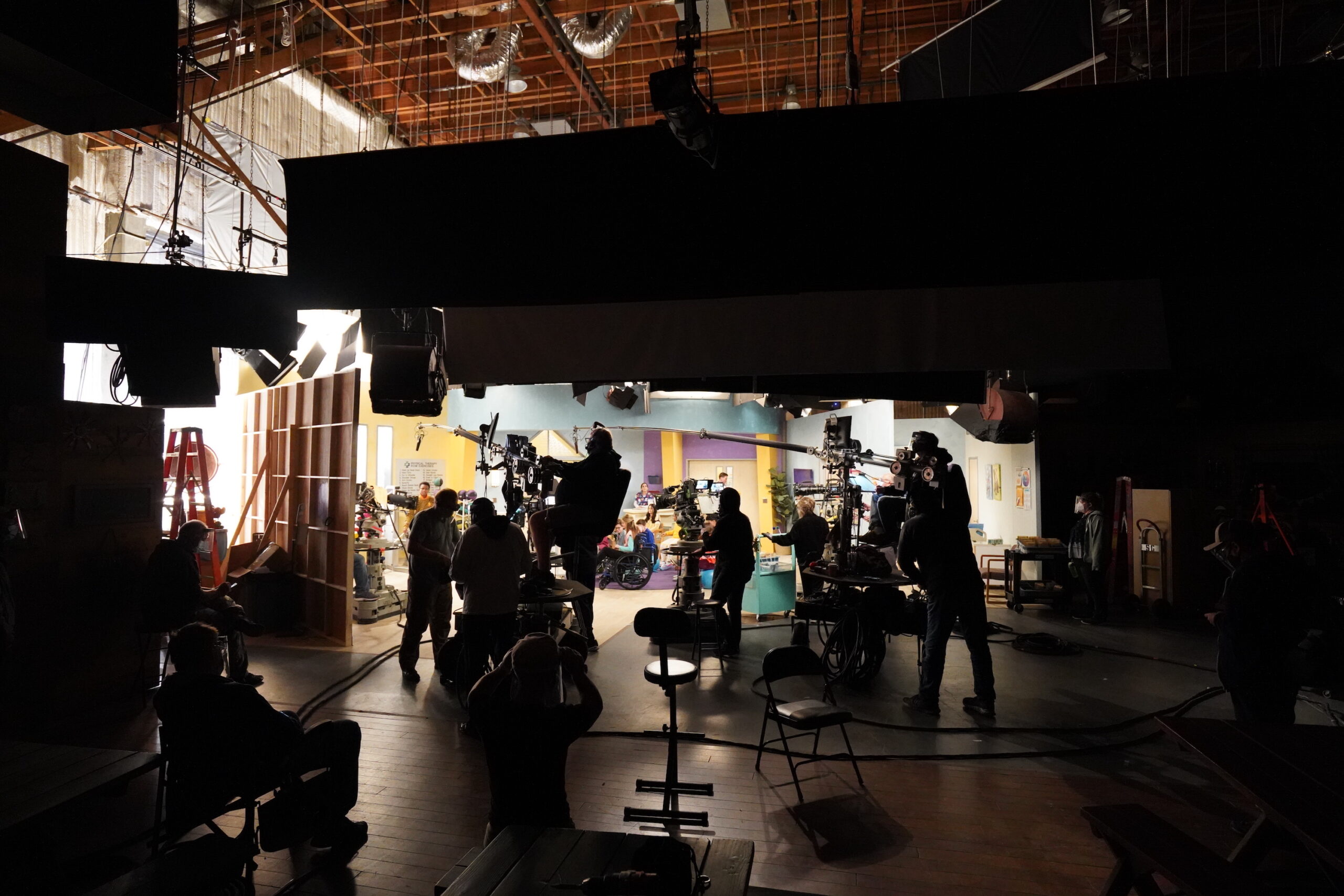 Tightly run productions led by teams like Mulcahy’s have been able to continue by following strict coronavirus guidelines. So far, the cast, crew, and production team of about 100 have had zero positive cases since Bunk’d came back into production in September 2020. [Photo: Lilian Manansala]

Mulcahy has maintained a positive outlook, despite the emotional and logistical challenges the cast and crew faced in a city that had been a COVID hotspot for months. For Bunk’d Executive Producer and Showrunner Erin Dunlap, Mulcahy has been a crucial figure in the production’s continued success.

A skill not easily quantified is the 1st A.D.’s ability to manage the energy and emotions on set. Mulcahy’s goal is to bring happy actors to their scenes, whether that’s making sure they’ve eaten breakfast or checking in on family events.

“’How are you doing? Did you see the Laker game last night? Oh my God, I love your wardrobe,’ whatever it does to build them up,” said Mulcahy. “So when they’re ready to act, they shine.. And when they shine, we shine.”

With a daughter working as a professional photographer for the National Football League, Mulcahy often uses sports metaphors. “I feel like every time you’re on a production, it’s a team sport. The whole idea of working on a comedy when you have 80 to 100 people, is to have that shared experience where we all succeed. And to me, it’s the loveliest thing ever.”

Always thinking of ways to engage the cast and crew, Mulcahy once organized a “Bubble Olympics” when one of the episodes called for human-sized hamster balls.

“He is in charge of setting the tone on set,” said Dunlap, “and the tone that he sets is one of, ‘Hey, we’re here to do a job and we’re going to get the job done, but we’re also going to have fun while we do it.'”

During run-thru, Mulcahy uses a megaphone so he doesn’t have to yell (which increases transmissibility).

“He’s like an emcee at a comedy club,” said Greaney. “He’ll use his mic on set, keeping everyone happy and upbeat as we’re all wearing masks and shields, trying to work together.”

At the end of a long day, after the cast and crew have left, Mulcahy takes in the fabricated neighborhood around him. New York street gets darker as the Southern California sun dips behind the fake buildings on the fake street. Mulcahy paused, thinking about his long career.