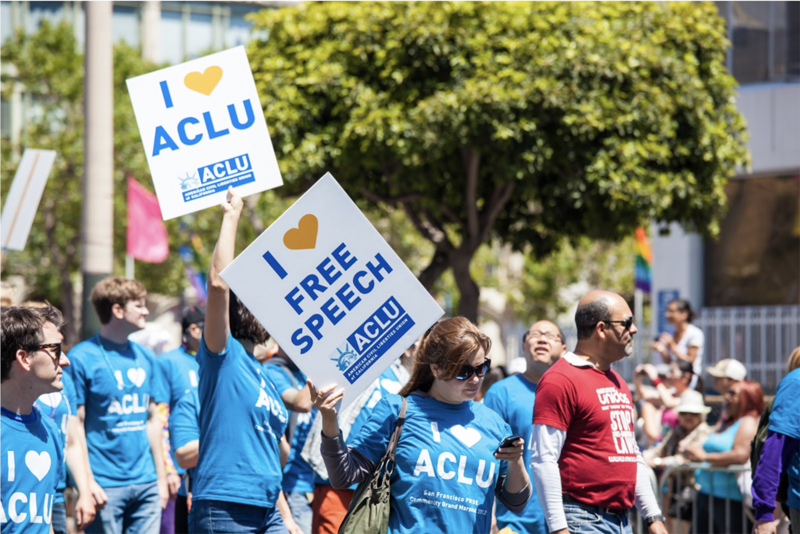 The ACLU Pushes Journalism-Style Blog Posts: Is it Advocacy Journalism?

June 24, 2012 in San Francisco at the Gay Pride Parade (Photo By Radoslaw Lecyk via Shutterstock)

Nick Lemann, Dean of Columbia University’s Journalism School, said of objectivity, “It is a goal to strive for, and the fact that people can’t achieve it doesn’t mean it should be thrown out as a goal.”

Conversely, advocacy journalists are willing to shed their proverbial objectivity shell in their work and let their beliefs —or at least their company’s beliefs—lead the way. An act of journalism seems to be wrapped up in a list of required traits that include a commitment to being unbiased. When a journalist is hired by an advocacy group, does their work continue to be journalism at all?

Jay Stanley states he is a senior policy analyst who writes blog posts about technology, privacy, and civil liberties for the American Civil Liberties Union (ACLU). Although Stanley writes journalistic-style work, a journalist wouldn’t be the right title for him, and his Twitter bio seems to confirm. Although, an advocacy journalist may be a term that aligns closer to his work at the ACLU than an “analyst”.

Like any good advocacy journalist, Stanley unabashedly takes a stance in most of his articles. In a recent piece entitled, “Say No to the Cashless Future—and to Cashless Stores”, Stanley’s voice, in the first person, is booming and calls his readers to action: “It is great to see this pushback against the supposed cashless future because this is a trend that should very much be nipped in the bud,” said Stanley.

Not only is Stanley open with his personal mission, but he is also paid by the ACLU to write articles like this one to promote their beliefs. The ACLU lists “Privacy & Technology” as a topic option in their blog section, thus it’s clear where they fall on this subject.

Are there also personal points of view that are coloring Stanley’s work at ACLU? Yes, but his opinionated work also comes along with supported research and facts. His attribution ranges from The U.S. Department. of Treasury to the New York Times. For instance, Stanley said with links, “Meanwhile, a backlash has prompted several cities and states including San Francisco, Philadelphia, and New Jersey to ban cashless stores (they’ve also been banned in Massachusetts since 1978)”.

Stanley also discusses his personal experiences with cashless stores. “I went to a counter-serve restaurant recently, and when the time came to pay for my order, took out my wallet, presented a $20 bill, and was told, “Sorry, we don’t accept cash.” I was flabbergasted,” said Stanley.

Stanley writes his article knowing that his opinions are out in the forefront for his readers to see, similar to an opinion article in the New York Times. When you are clear about the piece being biased, it is more ethical. Simply put, if you’re reading the ACLU’s blog, you know what you’re getting. No one is trying to con you with the pretense of unbiased journalism.

It’s hard to find a writer that doesn’t pick a story, or at the very least an angle for the story they were assigned, for a personal reason. Advocacy journalism and John Stanley’s work is legitimate journalism because it is upfront about its own bias and commits to its boundaries by not representing itself falsely as objective.