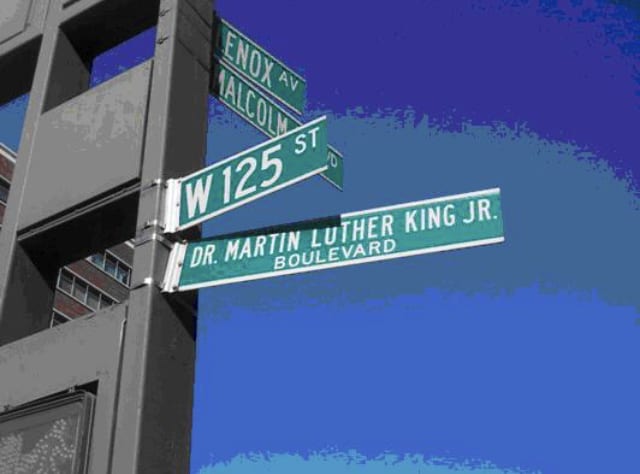 The Changing Face of Harlem

125th Street has always been the epicenter of Harlem and Black culture.  Photo By: Marsha Taylor

NEW YORK – When I was growing up in Harlem, just about everyone I encountered looked like me. My friends, my teachers, the people in the stores I went to, and my neighbors. Sure, there were a few Puerto Ricans, mostly in the bodegas and hair salons, and then there was Martin, the one white kid in my 4th grade class. I had no idea how he got there, but he was cool so nobody messed with him. Harlem was a close-knit community, even amongst the abandoned buildings and people we knew as the neighborhood winos. Everybody looked out for each other and although it was a poor community, it was very rich in culture and in spirit. We didn’t look for validation from anyone else, nor did it feel as though the community was missing anything.

In the early 90s, black communities across America were decimated by the crack epidemic. Families were destroyed, hundreds of young lives were lost, and neighborhoods were destroyed. Harlem was no exception. Still, most residents remained throughout the worst of it.

“Where were we going? We had nowhere to go! This was it. Harlem was home for better or worse,” said Angela Hampton, who was born and raised in Harlem. Hampton, 50, said she understands why those who weren’t from Harlem were afraid to step foot in the neighborhood. “If you weren’t from here, it was scary and it was dangerous. Even if you were from here, it was scary, but at least you felt like you knew the ins and out of where you lived.”

The neighborhood joke was that if you lived in Harlem and wanted a seat on the train, all you had to do was stand in front of a white person. They were guaranteed to get off before 125th Street, the first stop in Harlem. I certainly remember those days and they weren’t the brightest, but we stuck it out.

Fast forward to the early 2000s and things were changing in Harlem. Construction was happening in blocks that were once drug-infested and dangerous, new stores and banks were popping up, and there was chatter about more new developments soon to come. It seemed far fetched, but sure enough, each year it happened right before our eyes.

The Magic Johnson Theater, GAP, Old Navy, Pathmark, and the one that took everyone by surprise, Starbucks! Harlem was changing in a big way. Yet, even more than retail stores, banks, and restaurants, there was another surprise – new people. White people, Asian people, Arab people, and they LIVED in Harlem! What in the world was going on? Who were these people? To say they were an awkward sight, walking with their dogs, jogging, and shopping in the supermarkets, would be an understatement. I admittedly did a double-take on more than one occasion.

Was Harlem ready for this kind of change? Well, ready or not, it was here. They were here and “those people” became our neighbors. The days of getting a seat on the train above the 96th Street stop were long gone. Harlem was becoming the place to be, even for those who were initially reluctant. According to an interview in NYU’s Voices of Harlem, resident Christine Reedy, who has lived in Harlem for nine years, feels it is safe enough to raise her children here. Others have come to enjoy and love the vibrant restaurant and nightlife scene.

Today, Harlem is brimming with diversity. There is something for everyone, it seems, from food to fashion. Older Harlem residents seem to have mixed feelings about all the newness. Some, like Hampton, are enjoying the improvements and having the option to stay in the neighborhood to eat at a nice restaurant, go shopping, or go to the bank. She also loves her new neighbors. “I’ve made so many new friends and I’ve enjoyed getting to know new people. We respect each other.”