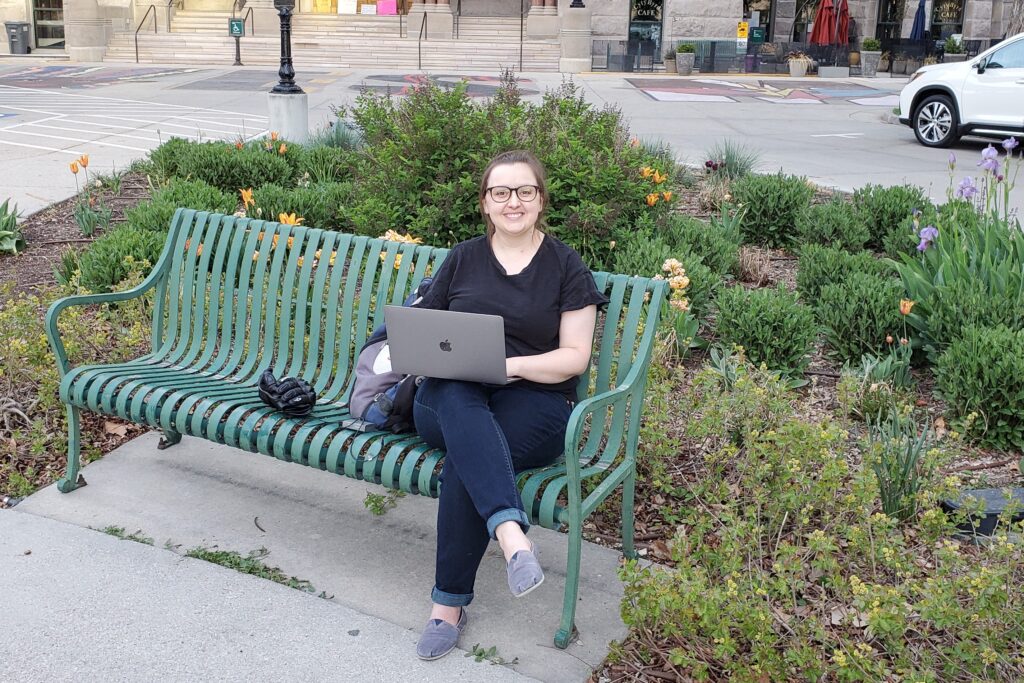 Becky Jacobs sits on a bench at a rally on May 5, 2022 in downtown Salt Lake City after filing a story on Roe v Wade. [Photo courtesy of Becky Jacobs]

I was sitting on the futon in my living room, watching “A League of Their Own” with my husband, when I got the news alert from the Associated Press.

One of my first thoughts was, “They were right.”

I had written a story just a few weeks earlier looking at what could happen to abortions in Utah, and experts at the University of Utah and Brigham Young University warned me this would happen. Those experts believed there was a slim chance that the Supreme Court would rule against Mississippi. [The pending case, Dobbs v. Jackson Women’s Health Organization, is set to decide the constitutionality of a 2018 Mississippi law banning most abortions after 15 weeks.] Either the Supreme Court would uphold Roe but let Mississippi limit abortions, or they were going to overturn Roe completely. Utah already has a trigger law [a law that would immediately take effect should Roe be overturned] in place, so if Roe was overturned, that decision would have a definite impact on the state. My story had information about Utah’s trigger law and abortion ban, what the laws were in neighboring states, and it let Utahans know the closest cities they could go to if abortion was further limited.

But even if I had been preparing for the possibility of Roe being overturned — and knew it was probably coming in June — to get the leak was a surprise. And it hit me: “Whoa, oh my God, this is huge.”

I immediately started messaging and reading Twitter. I wanted to get as much information as I could.

Then I stepped into action mode. My editor and I decided to republish my earlier story to bring it back to the homepage. That entire week, we tried to publish high-utility stories of what people were going to need, not just reaction pieces.

Staying Ahead of Big Changes

The whole week felt frantic, even if I’d been covering these topics for three years. Luckily, that experience meant that I already had the skills and background to do the best reporting I could do, and quickly. Misinformation goes around and people share their opinions, and I wanted to make sure people had the information they needed. So we outlined stories that we wanted to tell and put them in order of how we were going to publish them.

Then the rallies started popping up. The first rally in Utah took place the day after the leak. We had our night reporter cover it. But then the Thursday after the leak, there was another rally at the capitol. At other rallies, I’ve seen older people show up. But this time, it was all teens and young adults, which felt really powerful to me.

A week or two after the leak, I wrote a story talking to four women about their abortions. It was very emotional to go through those interviews, recognizing that this is someone’s personal experience, and knowing that they were going to get feedback. I really focused on sharing their experiences and their thoughts, and putting their voices out there.

Focusing on the Now

The opinion wasn’t a total shock to me. At the same time, I’ve grown up in a Roe world. That’s the only thing I’ve ever known. To see something like that possibly overturned is a little bit jarring.

But I try not to let my personal feelings come out in my reporting. Instead, I try to focus on the information that people need to use in their lives. Where can they go? Where can they get help? Where can they find information? I want to elevate other people’s voices and share their experiences and thoughts instead of just asking if they agree on the issue or not.

When I started doing this beat on women’s issues, there were a lot of people saying “thank you,” and that it was needed. Utah has a conservative government, and the Church of Jesus Christ of Latter Day Saints is heavily involved in the culture here. That’s always something I think about as I report on these stories.

We have such a talented newsroom. There was a lot of urgency that week and everyone was discussing, “Here’s what we’ve done, here’s what we’re planning, here’s the best way to do it.” Anytime there’s breaking news or a huge topic, what helps is to be focused on action. That’s what I turned to that week — not “what is my personal reaction?” but “What is my role as a journalist in this moment?”

It’s a historic moment. And it’s our job to cover this right now.