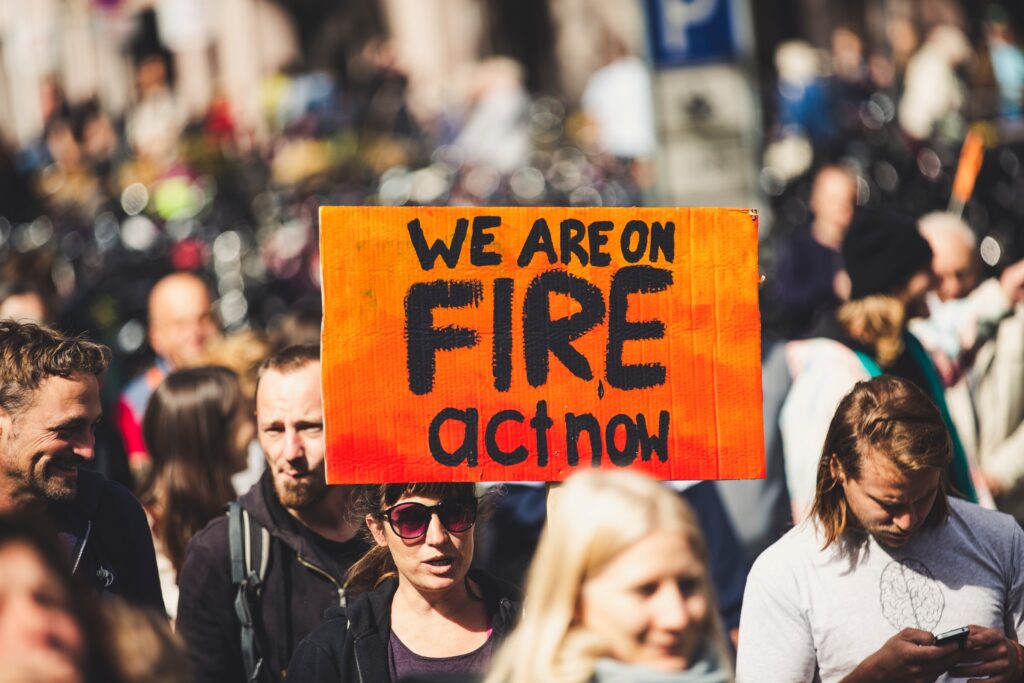 A woman holds a sign saying “WE ARE ON FIRE. ACT NOW.” [credit: Markus Spiske]

A woman holds a sign saying “WE ARE ON FIRE. ACT NOW.” [credit: Markus Spiske]

(NEW YORK) — The U.S. edition of The Guardian launched a new series called “Climate Countdown” that began one hundred days before November 4, America’s scheduled official exit from the Paris Climate accord, which happens to also be one day after the upcoming presidential election. The main heading is “100 Days to Save the Earth,” and every day, it ticks down. As of today, October 8, we have only 27 days to go. When it hits zero, then what? The ominous timer warns of irreversible damage to the planet.

The series spotlights a variety of stories about the disastrous effects of climate change and is being guest curated by seven first-time voters who view the climate crisis as the nation’s top priority.

John Mulholland, editor of The Guardian US, writes: “In 100 days the climate emergency may be even more serious. That’s why we’re launching this series.” Earlier this year the publication renounced all fossil fuel advertising, and in Mulholland’s introduction, he’s clear about his opposition to Trump’s blatant anti-environmental policies. In short, Mulholland and his publication are clearly advocating for stricter climate protections.

The Guardian US is an offshoot of the original British version, and in the UK, newspapers don’t make any pretense to objectivity. That’s an American conceit. So Mulholland has no problem unapologetically using his platform to push for a revolution. “In just four years, the Trump administration has set about dismantling much of the progress that has been made. By withdrawing from the Paris agreement it will now weaken the global resolve to tackle the climate crisis. The stakes could scarcely be higher. With your help we can put this issue at the center of our 2020 election coverage.”

“Climate Countdown” packs a punch for a distinct purpose: to underscore the severity of the current environmental crisis. The message is laid out in blunt headlines, statistics, and doomsday clocks that can be easily understood by anyone. The contributors do not muzzle support of necessary climate action and the election of leaders who will take it- leaders who believe in science, listen to experts, and will implement policies for real forward motion. Saying it without saying it candidly, Biden over Trump.

Some of the current headlines on the page include “The future has arrived. These explosive fires are our climate change wakeup call”, “A third of my country was just underwater. The world must act on climate”, and “The US withdrawal from the Paris Climate accord is a racist act.” Nothing short of direct calls to activism.

The Guardian chooses to give a voice to only one side of the controversial climate disagreements, but it’s correct in doing so, and it holds true to journalism ethics. Mulholland doesn’t give into Mitchell Stephens’ idea of ‘false balance’ by refusing to allot equal page space for unsubstantiated arguments from climate-deniers. There is no room for erroneous claims that temperatures are dropping or global warming is simply caused by the sun. Here there are solely fact-based articles. These journalists are determined to provide accurate information and humanitarian context before the upcoming election, and before scientists tell us it’s too late. They’re committed to shouting the truth. Isn’t that the Pew Center’s first core principle of ethical journalism?

The climate crisis is real, and it’s only getting worse. Unfortunately people in powerful positions often deny it. So in crucial situations like this, it’s the responsibility of journalists to move from objectivity to advocacy, to push aside the mess and carve a clearer path towards the truth. Like Peter Gleick says in his article, which is featured in the series, “We have no more time to twiddle our collective thumbs… There is no time to waste.”