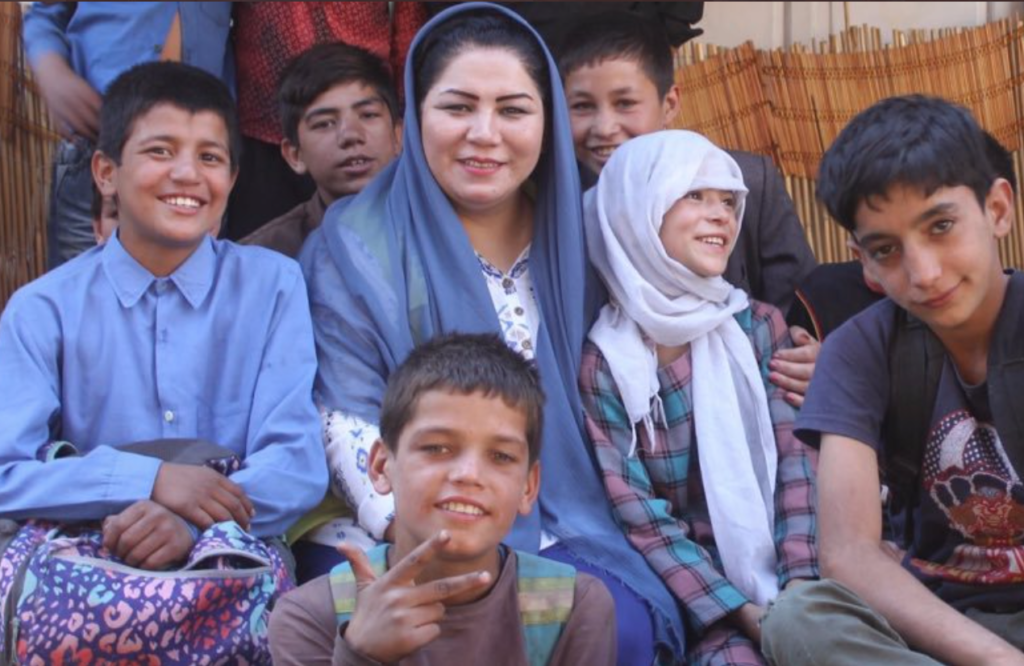 Laila Haidari is a bit of an anomaly in Kabul. She experiences road rage, listens to the occasional Persian rap, and rarely wears the hijab. She keeps a gun at her bedside to ward off enemies. In Afghanistan, where women’s rights hang in the balance, she is fighting the norm daily.

While small in stature, her voice projects when she speaks. In conversation, she’s intense and blunt at first, but every once in a while, she’ll break off into chuckles. There is a soft side to her. Her supporters and volunteers refer to her as “Mother,” after all.

Haidari, 42, is an Afghan human rights activist and social entrepreneur. She is the founder of Camp-e Mather, or Mother Camp, the only private drug rehabilitation center in Kabul. She built the clinic in 2010, drawing from personal savings and assistance from friends. The organization is funded now through Haidari’s second social venture, a restaurant called Taj Begum, located along the Paghman River in Kabul. Both enterprises employ recovered individuals and previous patients of the center, providing them with the skill sets and training they need to start over.

Haidari is of Hazara descent. The Hazara people are the third-largest ethnic group in Afghanistan but throughout time have been systematically persecuted as a minority across the country and elsewhere. Her family defected from Afghanistan before she even entered this world.

She was born in a refugee camp in Quetta, Pakistan, but ended up spending her childhood in Iran after her family was forced to relocate. At the age of 12, her parents married her off to an Afghan mullah over twice her age. She gave birth to three of his children, the firstborn when she was just 13.

During her marriage, her husband allowed her to take Quranic classes at an Iranian university; but she instead secretly enrolled in and studied filmmaking. Film, she believed, provided a voice to those who needed it most. She managed to divorce her husband when she was 21, but under Islamic law, he retained custody of their children, who eventually relocated to Germany as refugees. They keep in touch over WhatsApp. She emphasizes that “everything she does is for them and her brother.”

Haidari reunited with her brother Hakim in 2009 when she moved back to Afghanistan from Iran. At this time, he was battling an addiction to heroin and living under the Pul-e Sukhta Bridge in central Kabul with thousands of others facing the same circumstance.

The images she saw under this bridge remained ingrained in her mind. She says she “could not be indifferent to the suffering of others,” especially her brother. His condition and struggle motivated her to establish Mother Camp. With her help, he has recovered.

Afghanistan faces an ongoing, rising drug addiction problem. The country is the world’s largest opium producer, accounting for approximately 84 percent of global opium production over the past five years. According to the United Nations Office of Drugs and Crime, even with eradication efforts, there was still an estimated 6,400 tons of opium produced in 2018. Of this volume, 21 percent was retained to meet demand in the region, with the rest used for heroin production and export. The growing rates of addiction reflect the availability and accessibility to drugs. There were approximately 1.9 to 2.4 million adult drug users as of 2015, up from 940,000 in 2009.

Mother Camp intakes both men and women; individuals seek rehabilitative care for about a month. The center has treated more than 5,000 individuals since its inception. Mother Camp does not receive any governmental or foreign assistance.

Haidari wants to operate the center under her terms, and the opening of Taj Begum in 2011 has helped to sustain the center’s operations financially. To Haidari, Taj Begum has given “her economic independence and the power to educate other women in also finding their autonomy,” she says. Taj Begum has broken societal norms. Police previously raided the restaurant and arrested Haidari on the premise that unmarried men and women should not dine together.

Haidari continually fights for social causes across the country. She recently launched a hashtag campaign called #I_am aimed at, she says, “calling on the Afghan government and international community to listen to the voices and demands of ordinary citizens in peace talks.” She also lobbies and organizes public efforts for drug policy reform.

Beyond this, she is an advocate for women’s rights. She speaks out against Taliban occupation and their damaging actions towards the progression of women’s rights. She wants the world to understand how difficult it is for women and girls to live in this country. She “is inspired by the struggles of women who have fought for equal rights in their homes, communities, and countries,” she says. Every evening before she sleeps, she tries to “read even a small news article about women fighting for change.”

Her supporters respect her immensely. According to Kabul-based journalist Zakarya Hassani, Haidari is “charismatic, hardworking, and an outspoken woman who can never remain calm because of the challenges she faces.” Despite her supporters, she battles an overwhelming number of dissenters, from fundamentalist groups to drug dealers.

Indeed, Hassani’s words ring true. Haideri does not appear calm throughout our conversation. Her mind is focused on her next series of projects: opening another restaurant outside of Afghanistan, and a women’s clothing and footwear factory in Kabul. Before the interview comes to an end, she excitedly insists I watch a rap music video her younger volunteers recently produced. The messaging in this video touches on Afghani suffering and injustice. These are the same themes that Haidari combats every day.

There is solace from this. When she decides to take a rest from the storm, there is a new generation continuing to fight her battles.