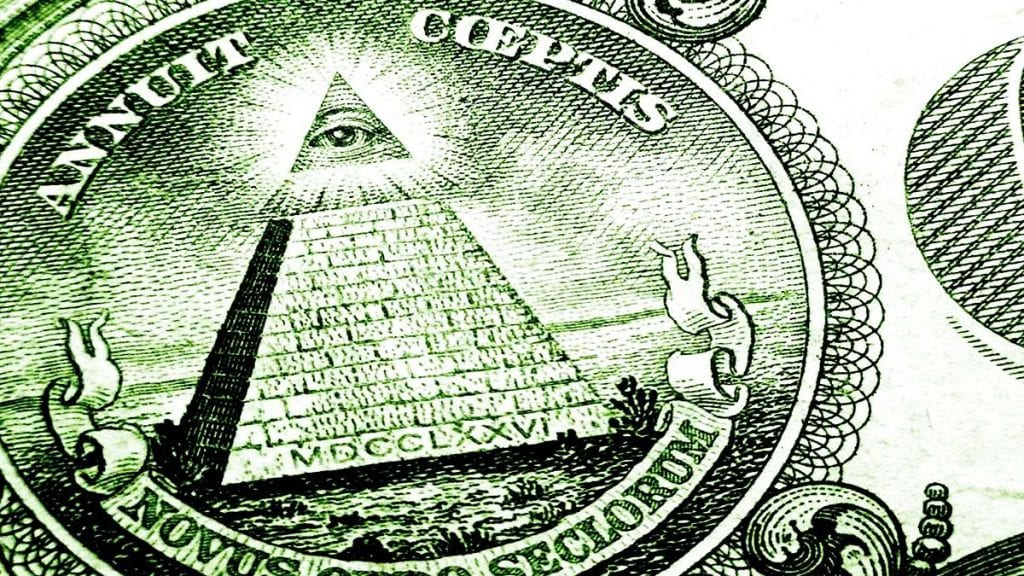 The U.S. dollar bill is believed to show symbols of the Illuminati, such as the pyramid, with the “all-seeing-eye” at the top.  Photo: Wikimedia Commons

New York – When I saw the request on my Instagram account, I was a bit taken aback.  “The Illuminati” wanted to follow me. Really? I thought.  This has to be a joke.  It felt a little creepy, but I clicked on the icon to view the page of the person, or organization, that somehow found me.  After scrolling through a few ominous posts, I declined the request. Whether or not there is such a thing as the Illuminati, I didn’t want to be part of its’ social media circle.

Conspiracy theories are nothing new.  From those who believe the terrorist attacks on 9/11 was an inside job to persistent rumors that rapper Tupac Shakur, who died over 20 years ago, is still alive.  There is just something about foregoing the obvious, or the facts as presented, and digging a little deeper in order to keep a shroud of mystery (and lingering doubt) out there. My curiosity has, at times, lured me into the speculative world of conspiracy theories.  It can be mind boggling, has caused me to raise an eyebrow at times, and even gave me pause on occasion to question what I thought I knew. As silly as they might seem to some, conspiracy theories can be quite fascinating, and the one that has caught my attention the most is that of the Illuminati.

The Illuminati was a group founded in Bavaria, in 1776, by Professor Adam Weishaupt.  The mission was to have his group gain greater control of society by having its members placed in positions of power to influence the masses. This “secret society” set out to establish enlightenment ideals, philosophies based on reason, and to replace religion.  Intent on creating a New World Order, the group met secretly, developed codenames for those in the hierarchy, and used symbols to communicate.  According to author Chris Hodapp, members of the illuminati “…really wanted to take over the world.”

The ambitious group was short lived, however, lasting less than a decade before being banned by the Bavarian government in 1785.  Yet, even after the shutdown, rumors persist, to this day, that the Illuminati continues to exist and operates behind the shadows of the world’s most powerful elite. Nowhere has this theory taken on more life than within the entertainment industry.

In the 90’s, several rap artists began referencing the Illuminati in their songs.  From Prodigy of the group Mobb Deep (“Illuminati on my mind soul and my body/ secret society trying’ to keep they eye on me…”) to Grammy award winning rapper and producer, Dr. Dre (“Money is the root I want the whole damn tree/Ain’t tryna stick around for Illuminati…”). With hip hop’s undeniable influence, Illuminati soon became a common theme and reference for anyone in the music industry who became successful.

Once the internet became part of our daily lives, the theory gained even more traction, with interviews, podcasts, and videos purporting to show “proof” that celebrities, including Jay Z, Beyonce, Justin Bieber, Sean “P Diddy” Combs, and Lady Gaga are affiliated with the Illuminati because of something they wore, the lyrics in their songs, or the way they hold their hands.

Journalist Cedric “Big Ced” Thornton, contributing writer for Black Enterprise Magazine and Co-founder of TheIndustryCosign.com explained why he believes so people easily buy into the Illuminati rumors. “Most successful artists or even industry executives are linked to this Illuminati based on speculation from others. There are cliques. There are circles…”  and according to Thornton, there is a common belief that there are a lot of celebrities who aren’t as talented as others, but somehow became very successful. “Some people shouldn’t be as successful [as they are]”, thus, they must be connected to the all-powerful Illuminati.

I don’t know whether or not I believe the Illuminati exists, but with Illuminati social media accounts attracting thousands of followers (50,000 on one Instagram account, 107,000 Twitter followers, 380,000 like on Facebook,  and 23,000 Youtube subscribers), seems the fascination for me, a lot of other people, will continue for a long time to come.