The Immigrant Restaurant Owner From a Country Without Food 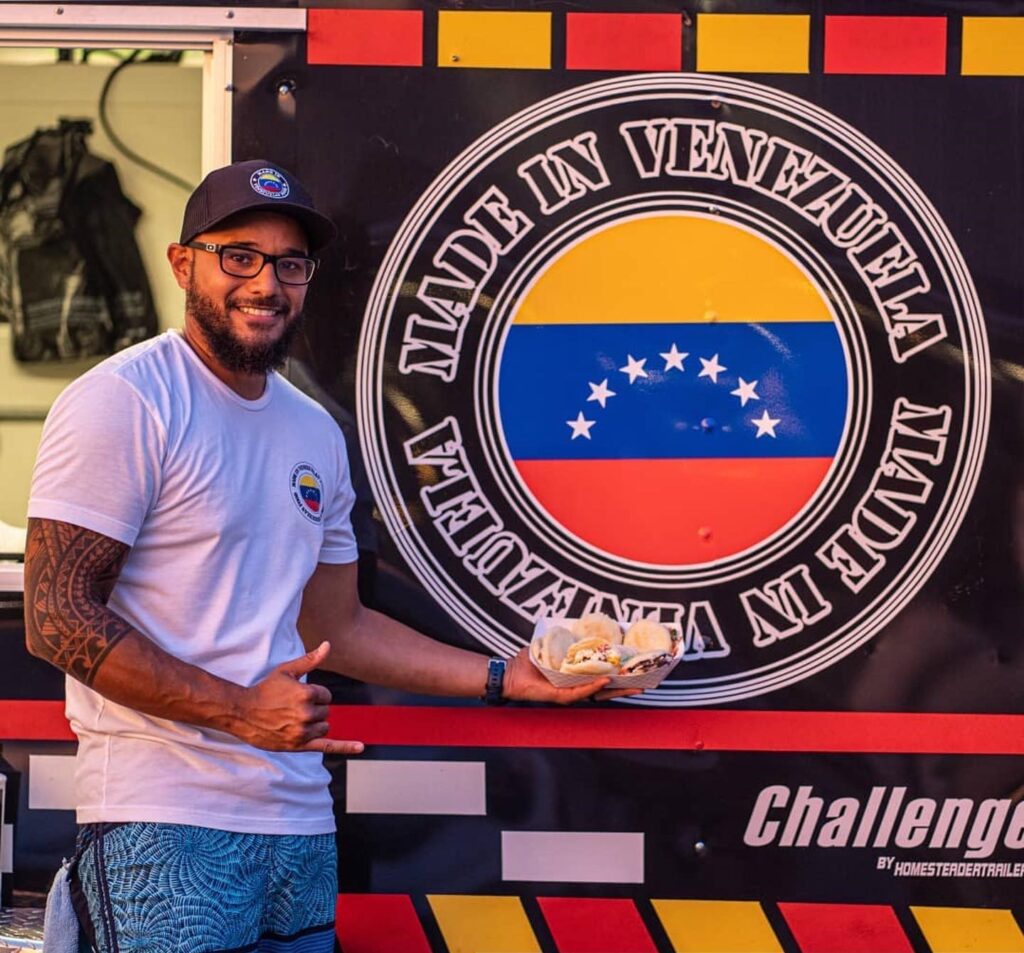 SURF CITY, N.C. — “Seven motorcyclists circled my car with red shirts [government agents], rifles pointed at me.” said Miguel Angel Navarro Castillo as he recounted one Friday night in 2015. At the time, he lived in his home country of Venezuela.

Fast forward to the present, and his environment looks quite different. He pauses to greet runners from the “weekly 5k” as they curiously lined up to order from his food truck, Made in Venezuela. Castillo is the only person in sight wearing a mask. But Castillo’s face isn’t the only thing he hides.

Curious at first, his customers gleefully try the famed arepa. It’s a simple offering–chicken, beef or veggie wrapped in a warm bun made from cassava flour. It’s Venezuelan. Repeat customers chatter amongst each other – they can’t believe it’s not a taco, and they like it.

After school, Castillo loads the family into his white van and tows his food truck on-site, six days a week. Made in Venezuela first opened in 2018 and has since experienced double-digit growth in sales each year. He intends to reinvest the money in a brick-and-mortar establishment, and aims for a grand opening by early 2021.

Historically, Surf City has been a largely monolithic community. In 2000, for example, Hispanics represented just 1 percent of the total population. By contrast, in 2017, the demographics shifted, and Hispanic representation has since increased to nearly 8 percent.

“Miguel is a hard-working person with Venezuelan food ideas. Has great talent and wants to put Venezuela at the top,” said Jorge Koky Villasenor, Castillo’s mentor and former boss.

Castillo was born in 1984 in Caracas, Venezuela. His formative years were spent under Hugo Chavez’ presidency. Chavez’ regime enjoyed many years of success due to Venezuela’s rich oil resources. Chavez shared the wealth with the people of Venezuela via health care, education, and cultural programs. After Chavez’ death, things took a sharp turn. The country quickly became poor, and the most basic resources became sparse.

Castillo was working as a journalist for the online publication, La Patilla – he loved the work. His father, Luis Navarro, was a journalist, too, famous for his anti-regime views.

“I published material on the relationships of certain media of the regime with drug trafficking and corruption and this man [state media representative] publicly threatened me,” said Castillo. “They questioned me for my name, and threatened my life.”

Immediately after, Castillo fled to the U.S. with 45 dollars in his pocket. In the beginning, he found work as a dishwasher at the town’s only Mexican restaurant – owned by none other than Villasenor. After saving money, he started his food truck business and never looked back.

Describing why a food truck, and why Surf City, Castillo was noticeably more emotional. “The reason I like to live here in this country, is because of the love you have for your country, [we] immigrants had learned to love our countries when we left there running away.” He repurposes the trauma with joy.

Castillo enjoys good relations with the neighboring businesses in town.“Yea,I would definitely see him as another local business owner that we have a great relationship with,” said Daniel Callender, his neighbor at Salty Turtle Brewery.

“I really appreciate the people, and I have pride for my family and me,” Castillo said. “I send the people [Surf City] good vibrations. I need the people to have a little taste of Venezuela!”