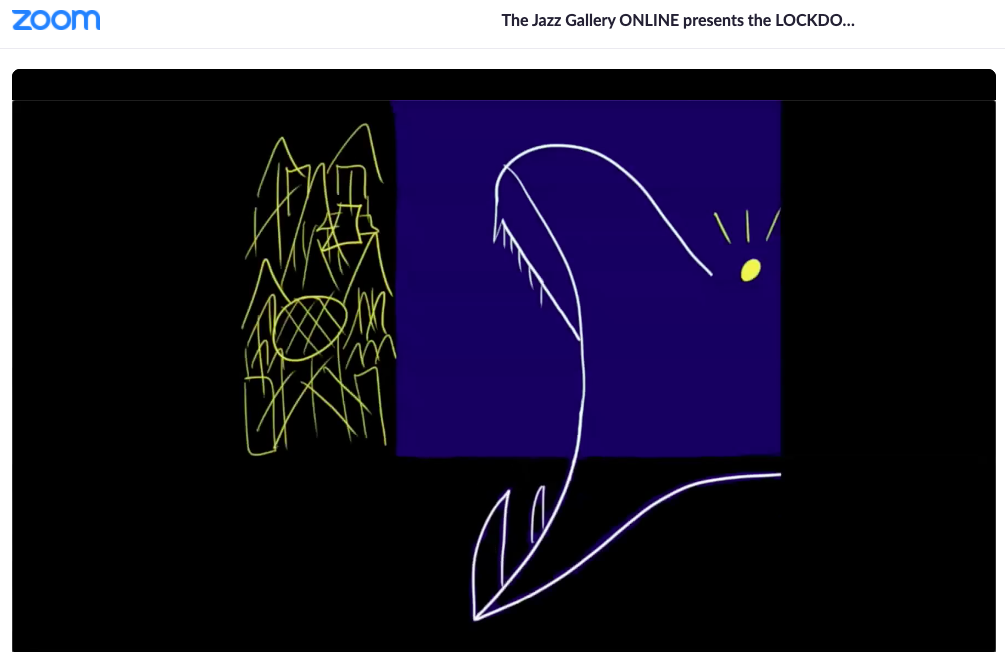 (NEW YORK) — During the coronavirus pandemic and lockdown, The Jazz Gallery in New York City turned to the internet to connect its international community of musicians and composers with listeners and new audiences worldwide.

In the first week of April, soon after venues began closing all over the U.S., The Jazz Gallery launched the Lockdown Sessions. This series of private Zoom webinars features four guest musicians who prepare a pre-recorded, 10-minute video of their choice. During the live event, listeners watch interactive videos and engage with the artists by posting comments and questions in the chat to better understand the musician’s musical and visual influences.

Musical artist Rio Sakairi, the center’s artistic director and director of programming since 2000, created the sessions for musicians to present audiences with an online experience that is cohesive and representative of their work and vision, while maintaining control of what they put on the internet.

“It’s important for musicians to understand how to present oneself on the internet, especially during these times,” she said. Through these sessions, “there are new dimensions to how we get to know you [the musician] as a listener.”

Pianist Micah Thomas shared a video in which he added interactive drawings to his musical improvisations. Drummer Justin Brown shared a video of himself playing music he recorded from his mother’s house using software that creates professional recordings as if they were in a studio. In his first video, he played drums over a music video by Salami Rose Joe titled “Octagonal Room,” which originally features no drum tracks. Guitarist Adam Rogers accompanied his music with two films by his partner Soomi Kim.

Pianist, keyboardist, and synthesist Jason Lindner, who was a sideman for David Bowie’s 2016 album “Blackstar,” presented a blowout video — one in which the colors are brightened — of his neighborhood of Greenpoint accompanied by some musical tracks he composed or collaborated on.

“The meaning [of the Lockdown Sessions] is simply keeping the community connected and the ability for The Jazz Gallery to still present artists and promote creativity without the option of live, in-person performances in their space,” said Lindner. He added that the sessions serve as a platform for artists to share their own creations with viewers and listeners.

A key mission of The Jazz Gallery is to create a global community where jazz musicians and audiences are authentically engaged and connected. Viewers asked personal questions about the lives of the musicians, from where they are based to how they are coping during these times.

During the pandemic, The Jazz Gallery’s physical space is closed and many musicians have left the city. Sokairi, one of the most influential people in New York’s jazz scene and beyond, concluded that the Lockdown Sessions allows musicians who want to remain tied to the community to “present themselves in a more meaningful way.” For the audience, these sessions represent a unique opportunity to interact with artists, listen to music, and connect.

Adriana Teresa Letorney is the Founder & CEO of FotoVisura Inc- a creative and tech firm. Primarily responsible for powering Visura.co (B2C) & Visura Pro (B2B). She is also the co-founder of the Scout Film Festival, a 501(c)3 organization that empowers and supports filmmakers worldwide aged 24 and under. Adriana is dedicated to studying the structural challenges of finding quality and diverse content and talent online as a key asset to the formation and implementation of sustainable economic development in any given industry. She began by studying the challenges faced in new media, journalism, visual storytelling, and publishing. Adriana Teresa has served as a publisher, editor, curator, producer, and writer. She has served as a contributing writer for New York Times Lens Blog and Huffington Post; and a juror, nominator, and reviewer for the Alexia Grant, World Press Photo Joop Masterclass, Prix Pictet, CPOY, New York Photo Awards, The Google Photography Prize, amongst many others. She has lectured at the Missouri School of Journalism, University of Syracuse, School of Visual Arts, and The New School, amongst others. In addition, she has curated numerous exhibitions worldwide, including the Latin American Pavilion at The New York Photo Festival (2008-2012), Lucie Awards Best of Show Exhibition (2010), Photoville (2012-13) and GuatePhoto Festival (2010-2015).