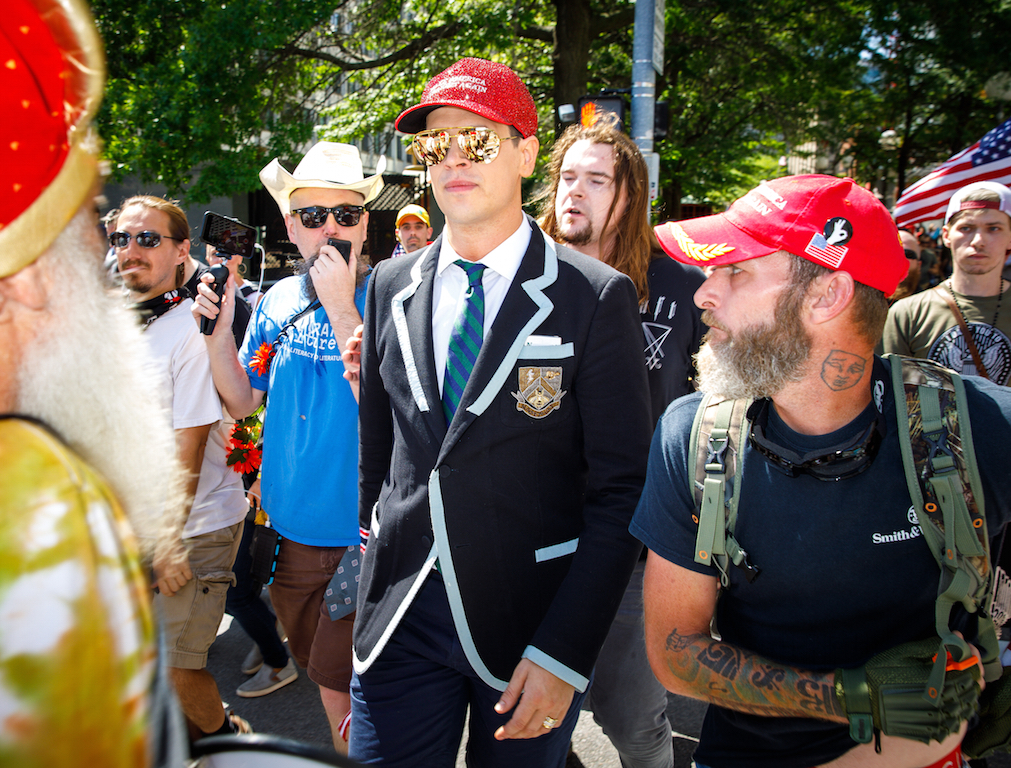 Oklahoma City, OK – Few conservative commentators have had as meteoric a rise and as spectacular a fall as Milo Yiannopoulos. After dropping out of the University of Manchester and being expelled from Cambridge, he founded a now-defunct media outlet and went on to write for the alt-right Breitbart for nearly three years. He’s published eight books and spoken at universities, which have ignited many a 1st Amendment argument. President Trump defended him in 2017 after U.C. Berkeley cancelled a speaking appearance due to collective concern of ‘hate speech.’ From 2014 to 2017, Yiannopoulos was a bonafide rockstar in the sordid world of alt-right. His work at Breitbart coupled with his Twitter presence was enough to put Yiannopoulos at the center of highly-publicized online controversies like #GamerGate and score him a seat at the Republican National Convention. He was seemingly everywhere. Until one day, he got himself banned from the platforms that once embraced him – and every other white-passing racist, misogynist – with open arms and Twitter AVIs that boasted different kinds of arms.

Calling to mind the Pew Center’s Four Core Principles of Journalism, Yiannopoulos doesn’t seem to practice any of them. Considering many of his bylines tout blatantly racist, anti-semitic, xenophobic and sexist ideology and criticism of liberals and social justice movements, including: ‘Gay rights have made us dumber, it’s time to get back in the closet,’ ‘Muslims will bring, ‘lamb chops, yoghurt and gang-rape to America,’ and ‘Would you rather your child had feminism of cancer?’ It’s clear appearing unbiased means little to him. He has referred to himself as a “provocateur,” “the most fabulous supervillain on the internet,” and a “lovable rogue,” rather than a journalist, writer or even a public speaker.

Because objectivity and an obligation to the truth go hand-in-hand, it’s not a stretch to assert that Yiannopoulos has no interest in maintaining any truth but instead, the incessant assertion of his own opinion. Virtually all of his Breitbart articles were opinion pieces and his books are written in first-person. Prior to Yiannopoulos losing access to the platforms that sustained him, he received what was his final book deal. In an unpublished excerpt, it’s revealed that he plagiarized his own writing – previously published by Breitbart – in a chapter titled, Why Ugly People Hate Me, likely because he couldn’t present any new information – or proof – to support his ideas. This practice wouldn’t exactly be new for Yiannopoulos as much of his work, presents an argument with little supporting evidence at all.

It isn’t difficult to argue that the only loyalty Yiannopoulos has practiced is for himself. Or, the version of himself he’s spent years creating. This was made clear when he tweeted what many deemed support for pedophilia, a move that would directly cost the lines of communication between him and his base. If his career was built on intentionally causing harm – of being a ‘lovable rogue,’ it was also rapidly derailed by it. He was permanently banned from Twitter in addition to other platforms like Facebook as recently as this year. Much of his university tour would result in a number of cancellations. He was also recently banned from a Furry convention after new inflammatory comments. Though he has given a number of interviews, he is unable to self-publish the way he once did nor is he invited to speak publicly on the most controversial conservative breeding grounds. Even CPAC, or Conservative Political Action Conference, uninvited him.

For a time, Yiannopoulos was almost amusing to watch. His public identity rails against what a traditional conservative commentator is supposed to be. He is openly gay and delights in divulging salacious aspects of his life, most recently, his “4 million dollar debt.” The likelihood of Yiannopoulos wearing the typical conservative pundit uniform of an ill-fitting suit or a plain red tie is about as high as him penning anything inoffensive. Instead, he’d turn up to universities and conventions in something akin to what one might imagine an Elvis impersonator on the Vegas strip might choose before he officiates the marriage of inebriated couple from the Midwest. His hair has been bleached; his teeth, even more so, though that’s not totally unlike his peers. He wears almost as much makeup as a Fox News host – male or female. But like many others in his field, he’s most at home at the center of a controversy. Or several. Ultimately though, his lust for limelight would leave him…well, homeless.

According to the Pew Center’s Four Core Principles of Journalism, there is no question that Milo Yannapolis is not a journalist. One scan of his portfolio would reveal that he holds no obligation to anyone by himself. His claims are entirely baseless and the line between fact and his own brand of fun no longer exists. The harm caused by his statements has directly inspired and emboldened the kind of behavior employed by a number of radical conservatives and white supremacists today. However, had he any sense of loyalty to his devotees, he wouldn’t now be without a platform, nor landed himself in debt. Even if Yiannopoulos wanted to be a journalist, he would no longer be able to considering he no longer has a platform.