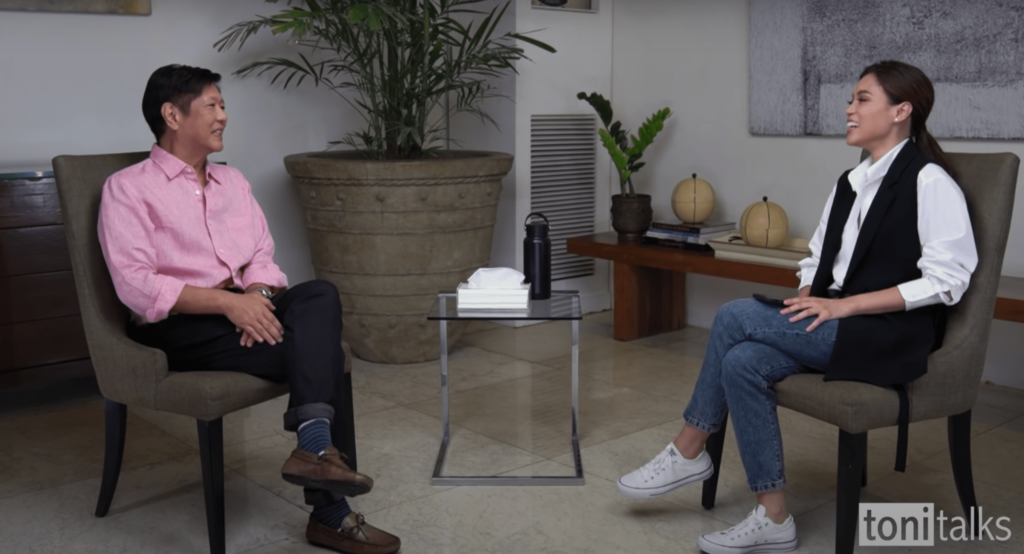 The Truth Is Never Neutral: A Look Into ‘Toni Talks’

(NEW JERSEY) – Toni Gonzaga, the iconic Filipina actress, singer, and television host who has assumed the role of a journalist in her YouTube series Toni Talks has received huge backlash for her September 13th episode titled, “The Greatest Lesson Bongbong Marcos Learned From His Father.”

Ferdinand “Bongbong” Romualdez Marcos Jr. is a Filipino politician and son of former president and dictator of the Philippines, Ferdinand Marcos. The Marcos era is considered a dark chapter in Philippine history after its 14-year period of Martial Law from 1972 to 1981. The period is remembered for the administration’s record of human rights abuses in targeting political opponents, activists, journalists, religious workers and citizens.

Gonzaga started her YouTube series of in-depth interviews with people from in and out of showbiz as a passion project in September 2020. Since then, she has sat down with opposition political figures such as Vice-President Leni Robredo, Mayor Isko Moreno and Senator Manny Pacquiao, which according to Rappler, “Gave her a veneer of neutrality.” In her interview with Bongbong Marcos, which has now reached 9.3 million views on YouTube, supporters such as KZ Racho commented on the YouTube video by praising Gonzaga on how she handled the interview professionally without being ‘one-sided.’

Sorsogon Governor Chiz Escudero also defended Gonzaga by tweeting, “Toni Gonzaga has the freedom and right to interview whomsoever she may want to in her platforms.”

But critics such as lawyer Rae Reposar wrote on a Facebook post that Gonzaga is participating in historical revisionism by spreading lies. The Ateneo Martial Law Museum also believes it was disrespectful to Martial Law victims and their families for downplaying the atrocities of the Marcos dictatorship. It stated that Gonzaga was whitewashing the history of the Marcoses and was helping spread propaganda.

While there are no hard and fast rules governing what is journalism and who is a journalist, Gonzaga is someone who publishes information in the gray area of journalism. As she has already been a celebrity, Gonzaga has built a huge social media following wherein her works can influence viewers’ knowledge and opinions. While Gonzaga has the freedom to interview different people, including political figures, to share their stories as professional journalists do, I do not believe that Gonzaga should be considered a journalist.

The Pew Research Center identifies the four core principles of Journalism as an obligation to the truth, staying loyal to the public, verifying facts, and remaining as unbiased as possible. Upon watching the interview, it was apparent that Gonzaga was only asking Bongbong Marcos softball questions that put him at ease like what it was like growing up in a huge palace. The duty of a journalist is to stir public conversations about important issues and events. This means that good journalistic interviews do not aim to comfort the interviewee. An unbiased interview should bring out the best and the worst from the subject. No topic or controversy that is particularly alarming to the public should be left out. An obligation to the truth means seeking out answers beyond what information the subject has provided. As a journalist, you simply cannot hold an interview with Marcos without discussing the critical issues to the public surrounding their families such as human rights violations, corruption, and atrocities.

Her stance on the interview with Bongbong Marcos did not follow the core principle of staying loyal to the public and verifying facts. She was merely a communicator that shared information and opinions of her subject to the public. Gonzaga was not sitting with him to fact-check truths, to ask the questions of the public, or to discuss the Martial Law’s abuse of power and its victims. For example, Gonzaga chose not to ask follow-up questions on Bongbong Marcos’s statement of the media spreading lies about himself and his family. In fact, after the video had gone viral,  Rappler listed his false claims about Martial Law in the interview. He may deny it, but the US District Court in Hawaii in 1995 ruled in favor of Martial Law victims in a class suit and awarded $1.96 billion to the claimants remains a fact. A true journalist would have been well-informed and ready to question their subject’s statements. Staying loyal to the public and verifying facts means to be a watchdog, holding people with power to account. She was not there to be a check on power. It looked like a formal interview but in my eyes, it was a casual coffee talk.

As for the last core principle of remaining as unbiased as possible, it may have seemed to some viewers that she achieved this. However, I personally believe that neutrality or stirring away from bias as a core principle of journalists is impossible. We are constantly vulnerable to bias as we pick our stories and choose our angles in the act of storytelling. What we think, ask, and write are all based on how we perceive ideas, people, and events surrounding us.

Gonzaga was biased in the way she chose to frame her interview. And let’s say she did strive for objectivity but was there truth in it? As Lauren Wolfe best explains it, “Striving for objectivity has actually hindered us from adequately covering truth, giving context, and achieving equity.”

In a similar argument made by GMA anchor Atom Araullo, he clarified journalists are human beings who cannot be objective in every story. However, what we do have is the objective methods of journalism. He introduces the intersection of Science and Journalism and explains that while humans are not free from bias, both scientists and journalists rely on a “Reliable and verifiable process,” which Gonzaga had failed to do. A true journalist must always center on the truth that is not neutral but instead verifiable.