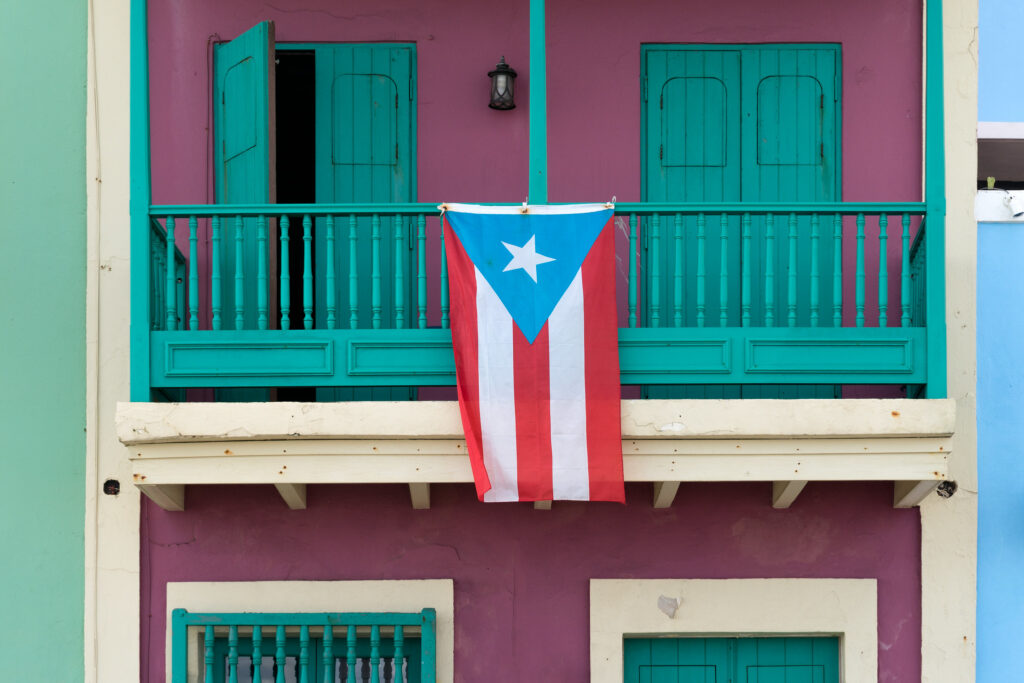 (LOS ANGELES) — I’m scrolling through TikTok and the first video that pops up plays dramatic instrumental music while showing the stunningly clear beaches in Dorado, Puerto Rico. A young male voice over starts: “Millionaires are moving to Puerto Rico.”

“I mean anywhere anybody moves to, there’s gonna be gentrification,” says a male voice. “We are being displaced from our home country,” continues the voice of a young man with the slightest hint of a Puerto Rican accent, as the camera glides over a golf course.

“We’re not pushing anyone out,”a new male voice states with a hint of annoyance.

“We’re going to have an even more segregated Puerto Rico,” says the man with the Puerto Rican accent as the images shift from luxurious homes to broken-down houses that don’t even have walls, and the dramatic music continues to grow.

“All of those images are from the same town: Dorado, Puerto Rico,” states a female voice, as we’re finally greeted by Bianca Graulau, a self identified independent reporter. The Puerto Rican native with over 600k TikTok followers is using social media to educate the rest of the world on the issues the colony is facing.

According to a TikTok video she made in 2021, she was born and raised in a small town in Puerto Rico and always dreamed of becoming a journalist. She was offered a full ride to a university in the U.S. but was told she could not report in English because she had such a thick accent. Graulau went back to the island after graduation and took a job reporting in Spanish, and later started working for a small publication in both languages. However, she says she always knew she wanted to report on stories in her own way, so she quit her job, became a Lyft driver and even slept in her car, all while creating content for her TikTok and YouTube channels.

In 2021, Logan Paul, an American YouTuber and social media personality, announced he was moving to Puerto Rico, just around the same time that many other affluent people made the move because of the tax breaks provided for those who reside on the island. This inspired Graulau to create the video on how that was affecting the island locals. That video would later go viral, providing her with a platform in order to continue informing the American public on what actually goes on in Puerto Rico. Since then, her popularity amongst Puerto Ricans has only increased.

On September 16, 2022, worldwide music sensation, Bad Bunny, released a music video for his song “El Apagón” on YouTube. The song starts and, at first, it appears just like any other music video from a reggaeton artist, with people singing and dancing while wearing colorful outfits. However, at exactly 0:57 the song stops and the video shows an explosion that occurred in a power plant in Puerto Rico, and Graulau’s voice takes over as she reports on the outage that left the entire island without power. The video, which is almost 23 minutes long, flips back and forth between the actual song and a mini-documentary where Graulau interviews people, shares their stories and provides context. The video raked up over 6 million views after only being out for four days in early September, allowing Graulau to reach an even wider audience. Bad Bunny is a Puerto Rican artist with over 64 million listeners on Spotify who’s always using his platform to advocate for Puerto Ricans on a global scale.

People may wonder though, because Graulau is not associated with any publication and instead publishes everything on her social media channels, is she truly a journalist? I believe it all comes down to her impact. Being able to use her platform in order to report on stories that the mainstream media ignores, while also educating people on the issues Puerto Rico is facing–that makes her a journalist. She also consistently conducts thorough research on her topics, interviews subjects, edits, and produces all of her own content.

With how technology has evolved, could social media be considered a new outlet for creators to broadcast news? I believe so. Many journalists, including the ones who are affiliated with major newspapers and publications, now use their social media platforms to share information. Why should she be any different? Graulau considers herself an ‘independent journalist,’ because she creates and publishes content all on her own. For anyone who may still be doubting whether that’s relevant or not, think about the fact that even musicians can now be completely independent thanks to streaming and social media platforms. I believe taking away the middlemen, such as big news publications and record labels, allows for artists and journalists to have better control over their content, and how they choose to distribute it.

Graulau’s work is valuable and should be considered journalism because of the monumental impact she has provided by sharing Puerto Rico’s stories with the rest of the world, in a language and on a platform, to other people who don’t live there. Growing up in Puerto Rico and later moving to the United States, I realized that most Americans don’t even know what Puerto Rico is, and if they do, they’re not even aware that we’re a colony, and that even though we have American citizenship, we are in many ways treated as second-class citizens. From Puerto Ricans not being allowed to vote and having no representation in Congress, it seems like in many ways we are often forgotten. Many of us who live outside and even the ones who still reside on the island are eternally grateful for the work that she continues to do through social media and the informative videos she creates. As a Puerto Rican, I believe change is coming and the start of that is educating the American public on what’s going on and what needs to change in order for us to feel equal to the rest of the population. People with big platforms such as Bianca Graulau are the beginning of that shift.