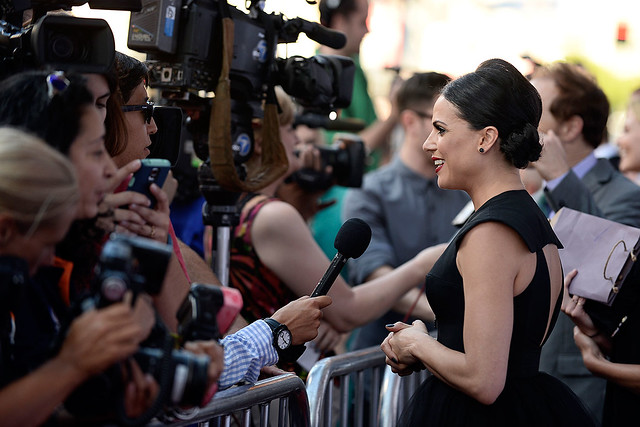 Lana Parrilla talking to the press during a red carpet event for ABC’s TV Show  “Once Upon A Time” (Credit: Flickr)

TMZ: Ethical Journalism or Not?

TMZ is one of America’s most love-to-hate online celebrity gossip platforms. Harvey Levin, 71, founded the site and serves as the managing editor. TMZ is notable for reporting on celebrities’ lives and scandals.

A short list of their coverage includes the infamous Beyonce, Jay-Z, and Solange elevator fight; basketball player Tristin Thompson caught on tape cheating on Khloe Kardashian; and the deaths of world-famous celebrities like Michael Jackson. There is no doubt that TMZ uses its website to share information with the public — but does its news coverage make its writers journalists?

When looking at the coverage TMZ has put out, it’s debatable if they follow the rules that professional journalists apply to themselves —  or any rules at all.

One common practice that is seen on the site is the use of the word “source” which rarely has a name attached to the title. This anonymity prevents transparency with TMZ’s audience, which has no way of verifying what the source said was truthful or not. For example, TMZ wrote about the death of a reality star recently but throughout the article, they refer to sources they never identified.

Basketball star Kobe Byrant, his daughter Gianna Byrant and seven other passengers died in a helicopter crash on Jan. 26, 2020. Again, TMZ was the first news outlet to report it, even before the Byrant family was notified. The Los Angeles Police Department, along with others,  reprimanded them for this article. The ethical practices TMZ conducts to get this information before the family or any other news outlets are suspicious — but they weren’t technically wrong in the reporting.

Even though TMZ can publish accurate stories, at times their fast pace reporting and questionable ethical standards lead them to recant the original story. When rapper T.I.’s sister, Precious Harris Chapman, died in 2019, TMZ was there to share with their audience the details of how she died. However, when T.I. called out the gossip site, they posted an apology saying that they, “Got this wrong”.

While mistakes are inevitable, this slip-up calls into question if TMZ can be considered a trusted source when reporting on celebrity news. Yes, they can get the information out fast but should speed overlook fact-checking or ethical standards? When information comes out and TMZ is the first to report it, how can their audience be sure it’s correct if there isn’t anyone to go on the record and verify it? Perhaps they provide their audience with quick updates on the hottest celebrity sandals but at what cost?

However, the news outlet does try to get both sides of the story when needed. A published article about Simu Liu, who plays the main character in Marvel’s Shang-Chi and the Ten Rings, alleges that Lu made posts on Reddit comparing being gay to being a pedophile. We can see that by publishing the alleged posts and Lu’s rebuttal to the claims, whoever wrote the article — either Levin or possibly a staff writer — did their due diligence. The author also reached out to Lu’s team to get an official response to the allegations and stated that the attempts weren’t fruitful.

But it’s debatable whether the reporters at TMZ can remain as unbiased as possible in his reporting. The site has covered the Kardashian/Jenner household but fails to disclose that Levin and Kris Jenner, who is the matriarch and manager of the other members of the clan, are friends. TMZ not sharing that information with their audience shows a conflict of interest.

The question of whether TMZ is an ethical news site is debatable but my verdict is that they are not. TMZ does put information out fast but sacrifices its ethics, fact-checking, and transparency to do so. Also having one of their editors being friends with various celebrities who are frequently written about on the site, shows a clear conflict of interests. How can the audience be sure the information being reported is unbiased as possible when there is a close friendship at work? To be a journalist you must check all the boxes, not just a few.