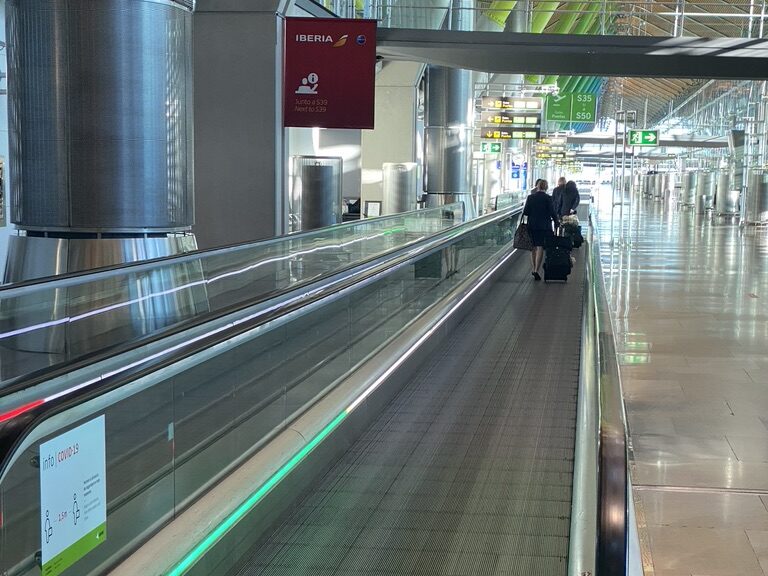 Tourism in Spain Continues to Suffer Amid the Pandemic

(MADRID) — Spain’s Adolfo Suárez Madrid-Barajas airport in Madrid is a ghost town. No more strategizing or jockeying for space while dragging your luggage through crowds of tourists; navigating one of the world’s busiest airports is now a walk in the park.

Traffic through Madrid’s airport came to a screeching halt in June after months of travel restrictions brought on by the coronavirus pandemic. That month, there was a 97.7 percent decrease in travel compared to the same time last year, a drastic drop in travel that has put 750,000 jobs at risk, according to Spain’s daily newspaper, El Pias.

From January to May 2020, the international tourism industry lost $320 billion in revenue because of COVID-19. According to the United Nations (UN) Policy Brief: COVID-19 and Transforming Tourism released in August, the current tourism crisis due to the pandemic is “a threat to our planet.” Depending on how long the pandemic lasts, the reduction in global GDP could be as high as 2.8 percent.

For tourism businesses, small and large, local and abroad, restrictions on travel imposed from all other countries impact Spain economically due to its heavy reliance on tourism dollars. All travel companies’ bottom lines are negatively affected by the lack of U.S. travelers to Europe. And this is a heavy burden on Spain’s small local businesses, says Angie Rice, co-founder, Boutique Travel Advisors (BTA), located in Paradise Valley, Ariz.

Almost 85 percent of BTA’s travel business is in Europe, said Rice. With Europe completely shut down, that meant a huge portion of BTA’s clients either canceled or rebooked travel in 2020. “It devastated our business,” said Rice.

The travel company does most of its business with smaller, more local companies overseas. Rice and her company’s loss of revenue only compound the loss for the locals with whom they work.

Florenta Veñas, a private tour guide in Barcelona, is just one of those local businesses. Veñas says all travel has stopped altogether. Most of her clients come from the U.S., with the U.K. as the second highest, but the U.S. is her biggest driver. As a local guide, she works with local restaurants, bakeries, wineries, and small hotels and says everyone is struggling right now due to the loss of travel business.

During the first wave of the pandemic, she did virtual and online tours, but it’s not enough to sustain her business. “Very little travelers have been coming for like seven months. My business is, frankly, nearly non-existent,” said Veñas. “It was a nightmare.”

In 2018, nearly 58 million travelers connected through Spain’s Adolfo Suárez Madrid-Barajas airport in Madrid. The airport is Europe’s fifth busiest and ranks as the 15th busiest globally. It’s a major contributor to global growth, development, and employment in the tourism industry and a significant contributor to Spain’s economy. According to statista.com Spain was the second-highest country visited in Europe, with 81.8 million visitors, making it a top tourist destination. When Spain is not a traveler’s primary destination, often they will book on both ends of a trip and spend three or four days in Spain, said Rice.

Spain has 47 UNESCO world heritage sites and dozens of gorgeous beaches. The country also hosts a range of festivals, like the San Fermín festival, also known as running with the bulls. The Semana Santa celebrating Holy Week can run for up to two weeks in multiple cities throughout Spain, bringing together people from around the world.

In August, Spain’s president, Pedro Sánchez, was in talks with the United Nations and the World Tourism Organization (UNWTO) to discuss ways to restart tourism safely. But as of Oct. 3, Madrid declared another state of emergency and imposed strict city rules. People must wear masks at all times, even if they are outside—unless seated at a table; and even then, no more than six people can be at a table in restaurants, cafes, and bars. Even in private settings, the number is limited to six persons. Restrictions on inbound travel have been reinstated, making travel to and from Spain difficult again.

With many U.S. cities heading toward a second or third wave and Europe experiencing its second wave, the hope of the tourism industry recovering is diminishing. Although another full lockdown looks imminent for Spain, Veñas says everyone is trying hard to avoid it.

There are currently still restrictions, including a 9 p.m. curfew, and residents have been instructed not to leave their city during weekends. But because Spain’s economy was in trouble before the pandemic, it doubled the tourism industry’s financial burden.

Veñas says the pandemic is breaking tourism and Spain. “I think that is the word for everybody from the hotel to the small restaurants. That was my experience,” she said. “Their main business was tourists. Taxis are, as well, in crisis.” Like a domino effect, when tourism is affected, it also affects other parts of the economy, said Veñas, adding, “We are preparing for the worst.”