BOSTON –The air quality in Massachusetts is declining due to emissions from various sources, especially pollution from motor vehicles, according to a report from the American Lung Association. Those living in the new and glossy residential buildings may be unaware that they are at risk of breathing in the pollution right in their own homes.

The city of Boston is in the midst of a construction boom, most notably in its underdeveloped areas. Office spaces and luxury condos are being built in neighborhoods like the Seaport District—which used to be parking lots and aging warehouses—and along busy highways.

“Honestly, it didn’t come to my mind that my apartment could have air pollution, I just liked the location,” said Tyler Reinhardt, who lives in the Leather District. “It’s not something that I thought about when I was looking for a place to live. I guess it’s something people should be talking more about. I’ll keep it in mind when looking for another place to live.”

While many locals are excited to see new buildings give the city a modern update, there is a lack of awareness about the possibility of pollution inside these buildings. The buildings may not be well-equipped to deal with the high air pollution levels: developers are not required in the state to take measures to prevent air pollution into the buildings. 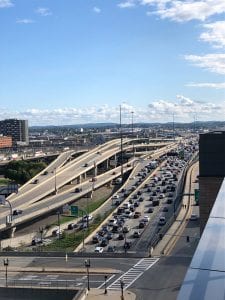 Traffic in Boston next to new residential buildings. (Photo taken by Alejandro Rosa)

“I thought the location was great, I commute every day to work so I wanted to live next to the highway and South Station, so I could use the train,” Reinhardt said.

While living next to a highway may be convenient for commuters, it could also have health consequences. Environmental experts say the city lacks regulations to protect residents that live near highways from the pollution.

A report from the Union of Concerned Scientists says Chinatown has the worst air quality in Massachusetts, due to its location next to the Southeast Expressway. The report claims cars, trucks and buses have a large impact on air pollution in Massachusetts and that air pollution is the largest environmental health risk factor in the United States, responsible for 63 percent of deaths related to environmental causes. The air pollution could cause asthma, pulmonary diseases, lung cancer and cardiovascular diseases.

In order to reduce air pollution from motor vehicles, the report invites the city to seek new transportation technologies like electric cars and buses. The city should also improve the infrastructure of the train system and promote the use of bicycles, the study says. The city aims to reduce motor vehicle use, make it easier for its residents to commute and, ultimately, to help improve public health.