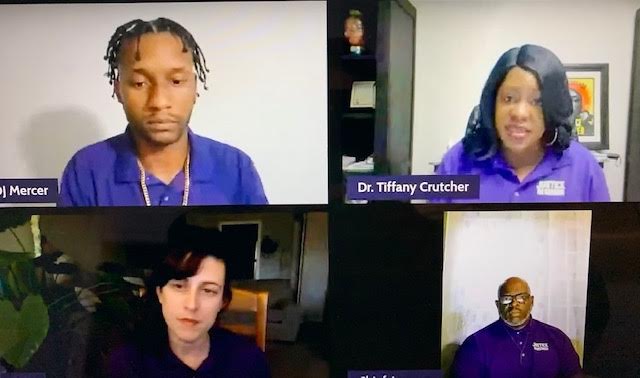 Panelists at the Justice for Greenwood Virtual Town Hall discuss the historic lawsuit and the ripple effects of the riots. [Credit: Zoom/Roona Korde-Samos]

(TULSA, OKLAHOMA) — A virtual town hall was held last week in an effort to bring attention to the three survivors of the Tulsa race riots who are still awaiting a final decision by the County District Court on whether they can bring a public nuisance lawsuit against the white mob who destroyed the affluent town of Greenwood 100 years ago.

Viola Fletcher, 107, her brother Hughes Van Ellis, 100, and Lessie Benningfield Randle, 106, are seeking reparations for the massacre that killed 300 people and destroyed more than 1,400 homes and businesses in the neighborhood once known as “Black Wall Street.” The survivors did not attend the virtual event, which was held by social justice advocates and the descendants of the Tulsa riot survivors.

“This case will set a precedent for reparations in this country,” said Dr. Tiffany Crutcher, founder of the nonprofit group Terence Crutcher Foundation during the virtual town hall panel on Thursday evening. Crutcher, who attended the Sept. 28 court hearing added, “It was an honor to stand alongside in solidarity with those survivors. This is for the nation, this is for the Blacks in America. If we win in Tulsa, we win everywhere.”

The residents of the upscale Greenwood district were attacked on May 31, 1921, by a white mob after 19-year-old Dick Rowland, a Black shoe-shiner, was accused of sexually assaulting a white elevator operator named Sarah Page in the Drexel  building. Rowland was taken into custody and rumored to be threatened with lynching.

Page later recanted the allegation. The mob left hundreds dead and thousands homeless and reeling from the wide-scale violence.

The damage to the thriving Greenwood community left a lasting economic gap between the races. The lawsuit alleges the mob caused a public nuisance when they destroyed the town. It also alleges that they wouldn’t allow residents to rebuild or to collect insurance claims and rebuild roads.

“As the mayor of Tulsa, I apologize for the city government’s failure to protect our community in 1921 and to do right by the victims of the Race Massacre in its aftermath. The victims — men, women, young children — deserved better from the city, and I am so sorry they didn’t receive it,” said Mayor GT Bynum on the 100-year anniversary  of the riots in May.

The North Tulsa area of the city now has a 35 percent poverty rate among its Black residents, according to Human Rights Watch.

“I will never forget the violence of the white mob when we left our home… When my family was forced to leave Tulsa. I lost my chance at an education. I never finished school past the fourth grade,” Viola Fletcher said when she testified in front of Congress in May.

The Justice for Greenwood Town Hall is an ongoing call for reparations by the descendants of the survivors. “We want equitable justice,” Chief Egunwale Amusan, president of the African Ancestral Society and a descendant of a riot survivor, said during the virtual event.

The historic court hearing that took place on Sept. 28 was a critical moment for Black Tulsans in their fight for justice. Thursday’s town hall event was held in anticipation of a final decision being reached in the coming weeks.

“This is an act of love,” Chief Amusan said. “We are doing this because we love our people, we love our community, and we need to reinforce that love by allowing people to know that we do freaking matter.”