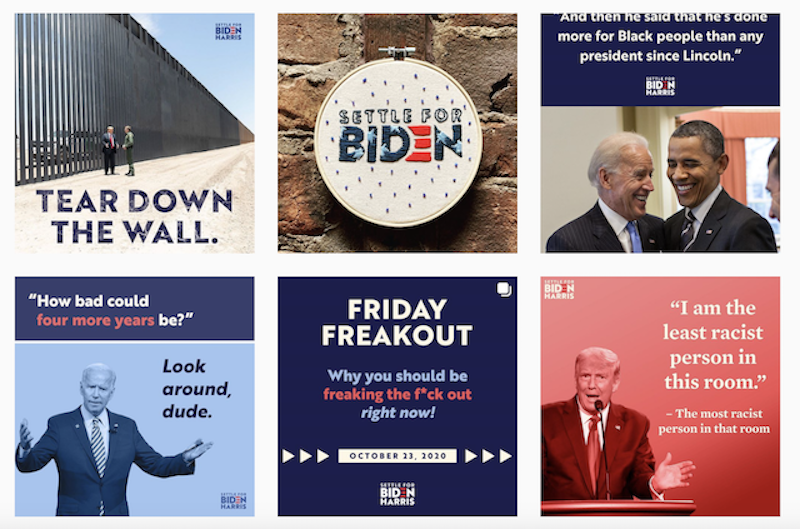 When Senators Elizabeth Warren and Bernie Sanders suspended their historic election runs within weeks of each other in March and April, the rest of 2020 seemed bleak for liberals who’d been tirelessly advocating for political shake-ups. Many threw in the towel, but not all.

Samuel Weinberg and Aditya Bhalla weren’t ready to give up on the fight for progressivism in the White House just yet. Instead of wallowing about what could have been, the two chose to embrace Democratic presidential candidate Joe Biden—in spite of his more centrist leanings—as their “good enough” pick. The challenge, then, would be for Weinberg and Bhalla to get young people with similar liberal ideologies to avoid the temptations of a third-party vote and become engaged enough to cast their ballots for the Biden/Harris ticket on Nov. 3.

Because of the coronavirus pandemic, the duo’s outreach has been mostly virtual. To compensate, a Minnesotan couple volunteered to spread the message on the ground through a cross-country van tour and phone-banking. The tactics have worked—the organization’s social media accounts boast over 200,000 followers, collectively. We want politics to be digestible,” Weinberg told The Click. “At the end of the day, it’s our future that’s on the line.”

As early voting continues and Election Day approaches, both Weinberg and Bhalla, Chicago natives, spoke to The Click about the obstacles they’ve faced in the past several weeks to persuade progressives to vote pragmatically, rather than emphatically, for what the two deem as the election that will determine the health and safety of our country and planet.

THE CLICK: Who is your target audience? Which groups of people—in terms of party affiliation or demographic background—have been more of a challenge to get “on your side,” so to speak? And why do you think that is?

BHALLA: Our target audience is prospective Green Party voters and nonvoters. However, these people have also been the most difficult to reach. To those who are considering not voting, I understand why that may be the case. It’s difficult to vote for and participate in a system that has consistently devalued the lives of working people in favor of the elite and the wealthy. Having faith in our federal government is extremely trying. To those potential non-voters, we say this: Your vote is just one tool you have to create the conditions necessary for the change you think is necessary, but that change will ultimately come from people, not from those in government. So it’s not about “who do you want to support for the next four years?” as much as it is “who do you want to fight for the next four years?”

One of your slogans, as I’ve seen on your Instagram account, is “Okay, fine.” Why did you settle on a tagline that is quasi-enthusiastic? Do you think that will reach your audience better than one with a more effusive “Okay, great!” slant?

WEINBERG: In short, people don’t like being lied to.  A lot of people out there are really excited to vote for Biden. And that’s great. Those aren’t the folks we’re trying to reach. If people who are already skeptical about his candidacy see Biden portrayed as something of a savior or as more progressive than they might perceive him as, it’s possible that they could just choose to stay home or cast a protest vote. We’re trying to say that you don’t have to be head-over-heels in love with a candidate in order to vote for them. The reality is that on January 20, either Donald Trump or Joe Biden is going to be sworn in as president, and only one of those options isn’t a fundamental threat to the fabric of our democracy.

BHALLA: We’re incredibly enthusiastic about getting Trump out of office, and that’s equally as important as our more quasi-enthusiastic and begrudging perspective on supporting Joe.

What would you say to the naysayers who would rather opt out of voting than vote for someone they are lukewarm about?

WEINBERG: Take 10 minutes to vote, and then keep working for the progressive change you want to see. Just because voting isn’t the end-all-be-all solution some people are looking for doesn’t mean that it isn’t worthwhile. There are substantial differences between how a Biden administration and a Trump administration would affect the lives of everyday Americans; and at this point, a vote for Biden will literally save lives.

BHALLA: One of the best perspectives I’ve seen on voting was on an Instagram post—not sure what account—that said something like, “Voting isn’t marriage, it’s public transport. You get on the bus and it takes you a little closer to where you want to go.” Every fight we’re fighting right now remains the same under a Biden administration, but this candidate supports a woman’s right to choose, and even supports some progressive policy proposals, like free public college tuition for families making less than $125,000 a year.

WEINBERG: Take climate change, for instance, not to even mention how much better Biden’s leadership will be when it comes to the pandemic. We know that even though Biden isn’t exactly where we want him to be in terms of tackling the climate crisis, that he will still take it seriously and take concrete measures to stop it. He’ll ban fracking on public lands, rejoin the Paris Accords, and put the United States on a path to being carbon neutral by 2050. But getting partway to where we want to be is still better than taking huge steps backward. Under Biden, progress will be quite likely. But under a second Trump term, regression will be inevitable.

What can we expect from Settle for Biden leading up to Nov. 3?

WEINBERG: Over the next few weeks, we’ll be urging our followers to get out and vote. At this point, if people haven’t settled or are still undecided, there probably isn’t much hope to change their minds on the candidates. Personally, it’s hard for me to understand how someone can look at the state of the nation—where more than 210,000 people are dead from a preventable disease, where a considerable portion of the country is literally on fire—and think, Hmm, I’m not really a fan of either candidate. We aren’t Biden’s biggest fans either, but the stakes of this election are far too high for anyone to do anything but cast a vote for Biden and then work like hell for meaningful change once he’s in office.