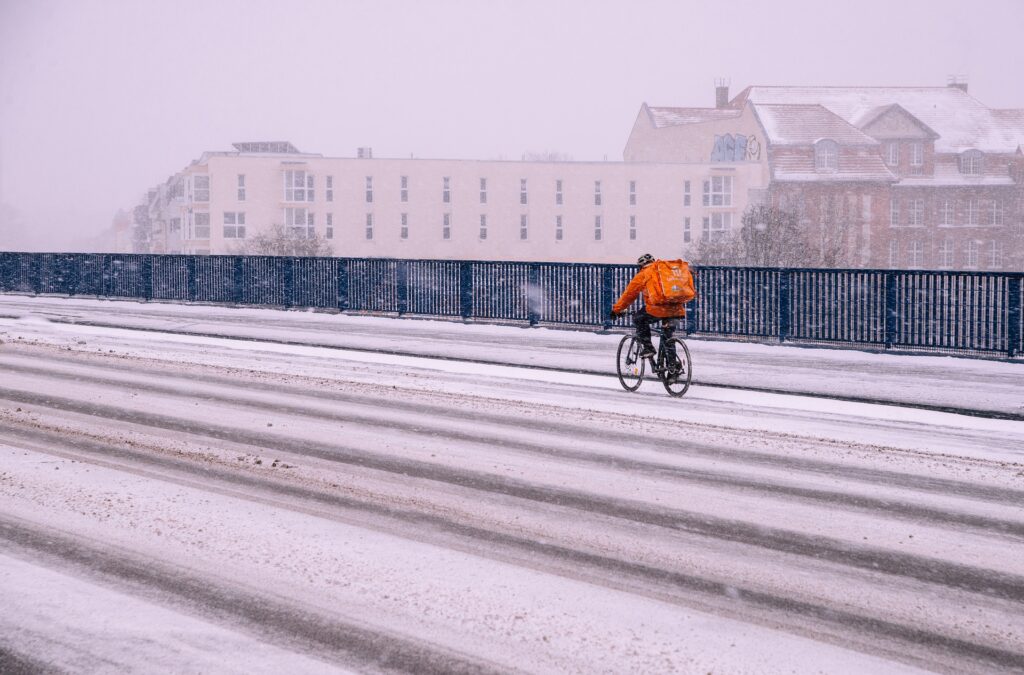 A delivery driver attempts to make deliveries despite the perilous conditions. [Credit: wal_172619]

Uncovering the Dirty World of Delivery Workers in the Gig Economy

(NEW YORK) — Gustavo Ajche works an eight-hour day as a construction worker. When his day is over at 2 p.m, he begins his second job as a delivery driver.

Ajche works for food delivery services like UberEats and DoorDash for well below minimum wage so he can save up for his children’s college education.

He isn’t alone in the profession of working with apps as a second job, nor is he alone in discovering that both the streets and restaurants are tough on drivers.

One way they’re achieving that mission is through bathrooms. A new set of laws in New York City is attempting to make right what’s been denied to gig workers for so long: the bathroom. It’s the first in a series of legislation Los Deliveristas has worked for years to add into law.

During the pandemic, the need for delivery increased exponentially. But as many people stayed home in their own neighborhoods, delivery workers were working with no home base for several hours a day.

These gig employees have subsisted for so long on low wages and predatory work practices that only became heightened during the boom of the pandemic. Now, places like New York City are beginning to respect them as workers and provide them with the necessary accommodations during a shift.

“There’s the impression from a lot of people that because we enjoy certain rights everybody does,” Colón Hernández said.

Los Deliveristas Unidos and The Workers Justice Project are sister non-profit organizations fighting to right this, including a new package of laws set to take effect in New York City.

A city filled with drivers

There are approximately 65,000 delivery drivers for UberEats, DoorDash, Grubhub, Postmates and more in the food sector in New York City according to Los Deliveristas. Most of them don’t have basic rights or make fair wages, they are mostly middle-aged and older immigrants working it as a second job.

“Sixty-five thousand delivery workers across the city. Can you imagine how many of them have issues with the companies?” said Ajche.

Ajche is one of these gig workers in the city and he works from 6 a.m. until 10 p.m. every night.

“You gotta get used to what you’re doing. It’s my daily life. I know my routine, get home, take a shower and then jump to the train,” he said.

He then begins work as a delivery driver for the apps, running from restaurant to restaurant and making sure customers aren’t disappointed in his timing – a constant source of headaches for delivery drivers he said.

Ratings and reviews (and tips) all depend on the timing of an order. Whether it turns out cold or not isn’t up to the delivery driver most of the time, but it’s their heads on the chopping block if it does turn up that way.

That’s without the traffic they’re fighting through or the dangers of riding their bikes through the streets. 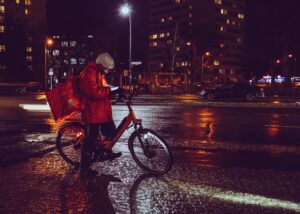 To make money, drivers must trek through all conditions with less than adequate pay. [Credit: wal_172619]

A survey released earlier this year of 500 drivers conducted by the Worker Institute at Cornell and co-authored by Los Deliveristas Unidos found that 54% of respondents had been robbed of wages by the apps and that the average worker made only $7.87 before tips, well below New York City’s minimum wage of $15 an hour.

This survey also found that 83% of drivers had been denied the right to use a restaurant bathroom.

A package of bills were passed in September giving New York delivery drivers minimum pay of $15 an hour, tip transparency, distance traveled for each trip, and the right to use the bathroom while on the job.

The driver bathroom bill, Int. 2298-A, enacted by the New York City Council, gives delivery drivers the right to use the bathroom of the restaurant they work for while on duty, something previously denied to workers.

“The city keeps saying we’re essential workers, and we want them to act like it and protect us,” Ajche told Los Deliveristas.

The law comes in the wake of Hurricane Ida that hit New York City in September 2021. Photos of delivery workers  carrying food amid the dangerous weather went viral.

“We shouldn’t have needed a pandemic, or a hurricane, for us to recognize that deliveristas are essential workers who deserve essential rights,” said New York City Councilman Brad Lander.

For those tens of thousands of workers, they can now use the bathroom as long as it doesn’t pose a safety hazard to the staff or the bathroom isn’t through the kitchen causing health violations.

“This is something nobody has mentioned for years, people are afraid and scared to lose their job,” said Ajche. “This is the problem with delivery workers, no one pays attention to them.”

Councilwoman Carlina Rivera, the sponsor of Int. 2298-A, said that she worked with Workers Justice Project and Los Deliveristas Unidos for two years to achieve these rights for workers.

“For nearly two years, we have worked together in pursuit of rights, protections, and justice for New York City’s delivery workers. Today, in testament to the organizing power and determination of Los Deliveristas Unidos, this legislation comes to a historic vote,” Rivera said amid the passing of the vote.

The bathroom law, however, goes into effect January 2022 and Colón Hernández is worried how the city will enforce the laws and workers will handle the new rights.

“We have a group of people that we have to educate…you wake up in January 2022, you’re going to wake up with a bunch of new rights that you didn’t have,” she said.

It’s not just the city that workers are fighting against.

In April 2021, more than 4,000 delivery drivers marched in New York City to protest their treatment by the app companies. These things include low pay, tip confusion and theft and hour regulation – many of the things that will be fixed by the new laws.

“I think [the apps] have seen their dedication and strength…they have nothing to lose,” Colón Hernández said.

Another law in the package passed by the NYC Council on Sept. 23 established minimum payments for delivery workers which go into effect in January 2023.

Part of the sweeping set of laws is an audit by the city’s Department of Consumer and Workers Protection which will study the labor conditions of the gig workers in New York City including salaries, expenses, rights, and safety.

Over the past two years, 19 workers have been killed in accidents on the streets and the companies share no liability nor do they have to provide safe passage during the work day at this point, according to Los Deliveristas. That’s still something they are fighting for.

​​”You risked your lives and your livelihoods during the pandemic to keep New Yorkers fed and the city afloat,” Rivera said in a statement about the bills’ passage. “Maybe it did take some very tragic moments to get to this moment—waist-deep floodwaters and a pandemic—but this victory is yours, we know how vital you are to this city, we know workers deserve dignity and respect.”

How are restaurants handling delivery workers?

“The restaurant industry and third-party delivery workers must continue to fight together to ensure that billion dollar third-party delivery companies can no longer exploit our city’s small businesses and workers,” Andrew Rigie, executive director of the NYC Hospitality Alliance, said in a statement.

Ajche used to have a second job working for a pizzeria as its delivery person, but working for the apps has changed his view of delivery work.

“I’m not going to say restaurants only but the managers of the restaurants, sometimes they are a little rude. This law is going to start working and change a lot of things because this is going to be the first time delivery workers are starting to make a change,” said Ajche.

At 11 p.m., Ajche can finally rest. “I think we have the power to do something good,” he said.