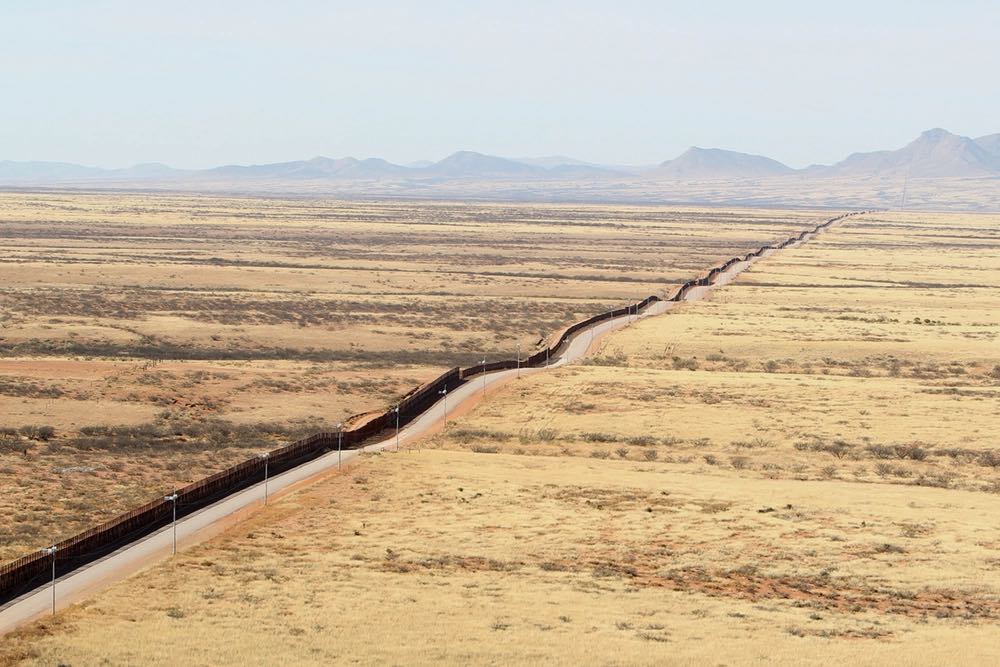 The border wall between Arizona and Mexico. [Credit: Donna Burton]

Opinion: Undercover Journalism is Worth It

(WASHINGTON, D.C.) — In 2016, Mother Jones journalist Shane Bauer embarked on a dangerous mission: He embedded with a right-wing militia from Colorado and traveled with them to the border of Arizona and Mexico to conduct a military-style operation meant to prevent migrants from coming into the country. His goal was to write about the growth of domestic paramilitary groups and examine their influence on U.S. politics.

To prepare, Bauer spent months meeting and training with other militia groups in the California desert. He also took care to look the part by assembling the right equipment: rifle, body armor, boots, and camouflage uniform.

After conducting his surreptitious research, Bauer attempted to contact all the militia members he wrote about after the fact. Some agreed to go on the record. As he reported in his investigative story, anything could go wrong when tagging alongside a group of heavily armed xenophobic extremists who repeatedly professed their love for “hunting Mexicans.”

Bauer’s identity as a journalist was not so secret, just a Google search away. Yet he didn’t carry anything that would give himself away, and none of his identification could be traced to Mother Jones or his work as a reporter. But this omission was similar to how the militia members he reported on were all similarly protective of their identities and went by call signs.

“I don’t lie to the guys, but I don’t tell them I’m a journalist either,” Bauer wrote in his piece. “I can tell them about my background in the militia movement: Before joining the Three Percent United Patriots (3UP) for this border operation, I trained with the California State Militia and the 31st Defense Legion across northern and central California.”

Early on, Bauer had a run-in with the police at a Walmart parking lot in Arizona. The encounter was brief and intense but far out of the norm for what the militia members said they experienced. After they explained themselves, the police officer let them go and thanked them for volunteering to patrol the border.

“Destroyer says that was the best interaction he’s ever had with cops,” Bauer said at the top of the article.

Even as he didn’t explicitly list the dangers of this particular assignment, the scenes he depicted made the implied risks clear. During their time on the Mexican border, the group had several close calls. On one occasion, they drew their weapons on the Border Patrol, initially mistaking them for illegal drug traffickers.

Apart from the risk of being accidentally shot, Bauer also faced other occupational hazards. Given the nature of this assignment, it’s not difficult to imagine a terrifying escalation of violence if a militia member armed with an AR-15 and hundreds of rounds of ammunition wildly fired on migrants crossing the border. Bauer could have found himself caught in the crossfire. Or worse, he could have been an accomplice to a murder.

The militia leaders Bauer interviewed revealed their own anxieties about the angry, misogynistic, racist, white men who fill the ranks of their organization.

“I worry every day that people who come into the militia will go out and do something,” said one of the right-wing paramilitary group leaders that corresponded with Bauer.

The “something” the militia leader referred to is an act of terror or violence. This year, the Office of the Director of National Intelligence published a study highlighting the dangers presented by extremist militia groups, characterizing them as the “most lethal” domestic threat in the U.S. Aside from the government, right-wing extremists have also increasingly threatened and targeted journalists, according to the U.S. Press Freedom Tracker.

Because of the risks, few reporters pursue similar stories. The scarcity of reporting on the inner dynamics of such groups makes Bauer’s work especially valuable. Going undercover was the only way to get the story, one that is important for the public to know.

A reporter pursuing a story in the more traditional sense – working in a fully transparent manner – would have had difficulty getting leaders of right-wing paramilitary groups to admit their ranks are plagued with racists and misogynists. As Bauer reported, many such groups publicly profess to have strict policies against racism and claim they have nothing against poor migrants from Mexico. One such group even purports to provide humanitarian aid to people along the border.

This is where the value of Bauer’s reporting comes into play. After he completed his undercover assignment, he contacted the militia members he wrote about and challenged them to explain their true intentions. Unlike most journalists who don’t have firsthand knowledge of what actually happens within militias, Bauer could speak to specific instances where their actions conflicted with their professed policies.

“You mentioned running into migrants and giving them water and blankets, but I saw guys dump out water jugs they found in the desert,” Bauer asked one such militia leader in a Q&A conducted after his undercover assignment.

Similarly, journalists would likely have a more challenging time verifying the close relationship between the Border Patrol and unsanctioned paramilitary groups without the kind of firsthand reporting Bauer brought to the table.

When he later contacted the agency to ask about their connection to militia groups, it said it “does not endorse or support any private group or organization taking matters into their own hands.”

Bauer’s reporting, on the other hand, exposed a crucial contradiction. During his time in Arizona, the Border Patrol regularly went out of its way to assist the rag-tag groups of armed racist vigilantes eager to take the law into their own hands.