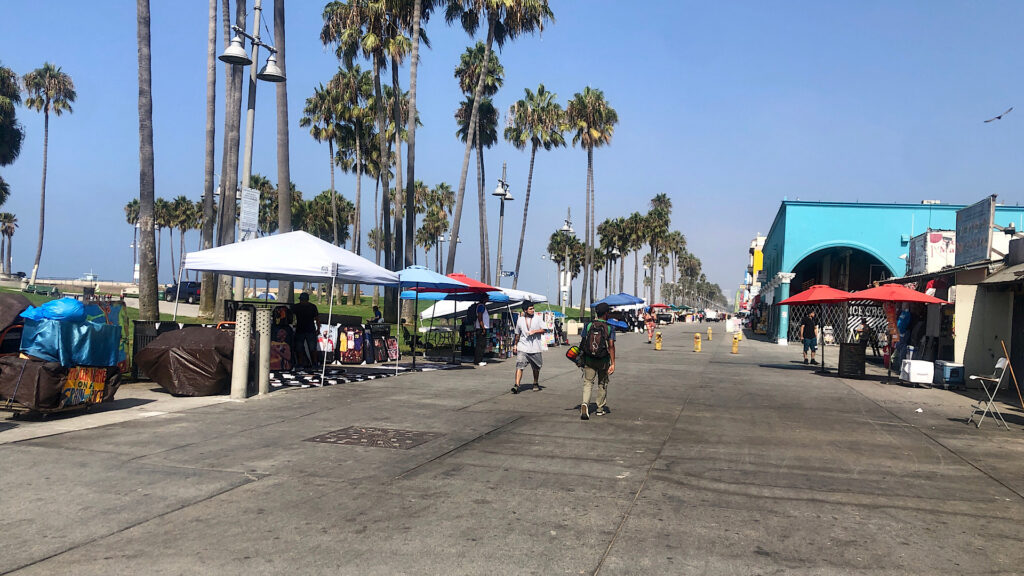 The scene on the Venice Beach Boardwalk is bleak without its usual hordes of tourists. [Credit: Emily Leibert]

The scene on the Venice Beach Boardwalk is bleak without its usual hordes of tourists. [Credit: Emily Leibert]

(LOS ANGELES) — For the first time in 30 years, the future of Aya of Venice—a clothing store on the Venice Boardwalk—is uncertain.

Sheyna Ascencio, an employee of the boutique, says that business has been slow since the pandemic hit, and break-ins are frequent.

Ascencio and her boss are scared for the future: “We don’t know what’s going to happen,” she says.

This gloomy attitude is unusual for the boardwalk, which—before the pandemic—was alive with cultural diversity and politicized street art. The echo of the hippie generation drew in hordes of tourists who hoped to bottle the vendors’ carefree lifestyle and take some home. Visit Venice lovingly called the boardwalk a “freak show.”

On a bright day in late September that feels like summer, residue of the nearby fires still hangs in the air, and a yellow tint paints the cloudless sky. On the corner of Pacific and Windward, a majority white crowd gathers at Great White, a sleek coffee shop just across the street from the forlorn boardwalk.

Beneath the famed “VENICE” string lights, the boardwalk’s characteristic dynamism has evaporated. A handful of shops on Pacific Avenue that lead up to the beach are permanently closed and covered in illegible graffiti. One window warns, “WE MUST LEARN TO LIVE TOGETHER AS BROTHERS, OR PERISH TOGETHER AS FOOLS.” Clearly, the racial tensions rising across the nation are not lost on Venice.

The boardwalk itself, normally frequented by artificially bronzed bodybuilders with equally unnatural muscles and naked musicians covered in gold paint, is sparsely populated with rickety tents and vendors with sun-damaged skin. Commuters pass by on bikes or roller skates, but most continue without acknowledging the boardwalk residents.

The kitschy souvenir shops, rusted with age, are still stuffed with crass shirts and even the skate shops—descendants of Dogtown—are open, but devoid of customers. Employees mill about, chit-chatting with owners of neighboring establishments out of sheer boredom. Most do not wear masks.

Perhaps most jarring is the uptick in homelessness, which has now risen to 1,685 individuals in Venice Beach, 24% of whom are living unsheltered on the street, according to the Los Angeles Homeless Services Authority.  With the tourists gone, the desperation is impossible to ignore.  On one corner, a makeshift tent city sprawls across an entire alley, draped with blankets and propped up by abandoned wheelchairs.  A sign out front reads, “I can turn your poems into coloring paper pages.”

Venice Beach normally sounds like a carnival frenzy: a jumble of live music, seagulls, and laughter.  But these days, it’s quiet enough to overhear a conversation between three locals.  A man, smiling, says firmly to his audience, “You’re my brother, you’re my sister, you’re my mother.”

Somehow, amidst the wreckage, a sense of community lingers.  Venice Boardwalk is still home to immigrants and lost souls; it still extends an ocean of acceptance to those who need it.  But the “freak show” oasis, mostly vacated, isn’t the same. Despite an enduring spirit, the boardwalk feels broken.

“I’ve lived in Venice my whole life,” Ascensio says.  “That’s why this makes me so sad.  Because I know how amazing Venice used to be.”