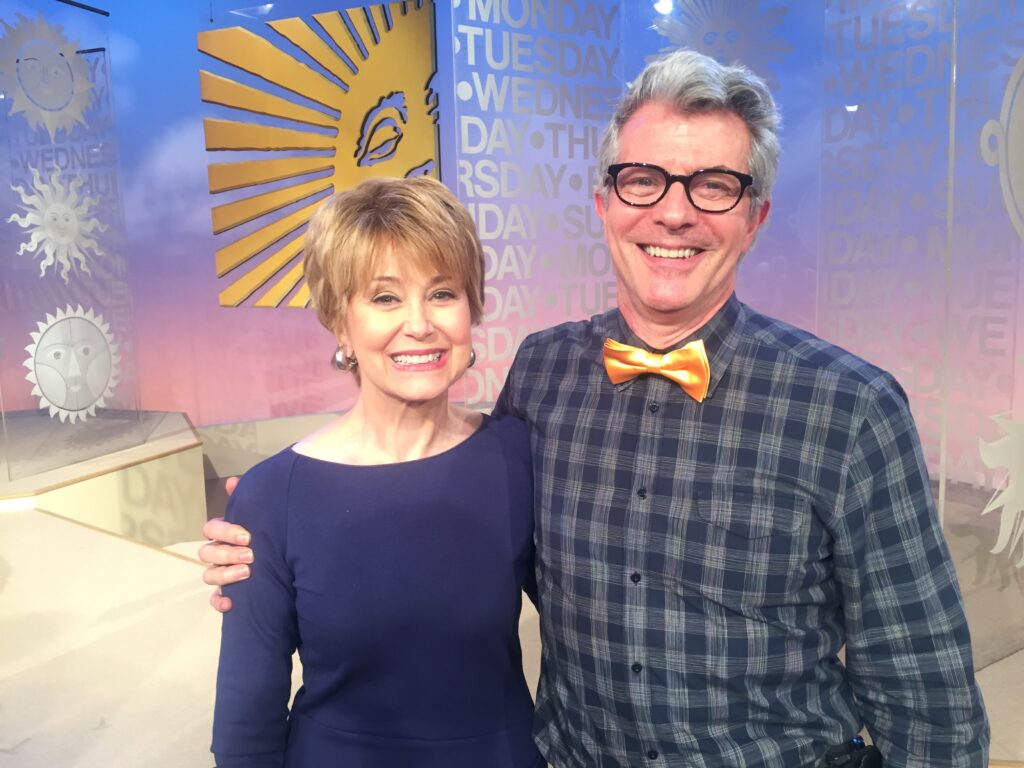 (NEW YORK) – Jay Kernis, CBS Sunday Morning producer, turned 69 this year. There are not many television producers in the workforce around his age, he explains.

“If I could keep being a producer and doing stories on this show for a couple more years, I would do it until I no longer could or until they threw me out. That would be wonderful.”

Kernis has been in the industry for over fifty years, and during this time, he has held many titles at big-name news organizations, including NPR, CBS, NBC, and CNN. Kernis has won a Peabody Award, a DuPont-Columbia Award, and several Emmy Awards.

“I’ve been doing the same thing I’ve always done since sixth grade. Which is being curious, telling stories, and somehow combining the arts in whatever I do,” said Kernis.

Kernis, who grew up in Bergenfield, New Jersey, was raised by his mother that worked as a Wall Street secretary, and his father who sold lingerie. His parents held strict beliefs and made it clear to Jay and his brother that it was important to work hard and find success in their working lives.

Growing up, he had chores that seemed endless to him—helping with laundry and dishes, getting the milk from the box, cleaning his room, raking leaves, mowing the lawn, and shoveling snow. His parents didn’t approve of his taste for rock music or of his strong opinioin of being against the Vietnam War.

“We all went to a Conservative temple,” Kernis said. “We always went to temple on High Holy Days. We always self-identified as Jews and spent most of the important holidays with relatives.”

The Kernis family lived in a Jewish neighborhood where he often faced antisemitism growing up.

“I’m of the generation that did duck and cover exercises in elementary school and junior high,” said Kernis. “I grew up thinking that either the Soviets would kill us or Nazis would kill us.”

Kernis reflected on his upbringing in the 60s and how he would walk home from school for his lunch break at Lincoln Elementary School.

“Everyone was very comfortable – brothers and sisters and friends of all ages walked together, and the biggest danger was crossing one busy street that had a traffic light,” Kernis said.

“At one point, we were near her house, and she said, ‘You ask a lot of questions, you ask too many questions. I’m going to put you on the school newspaper. Then you can ask as many questions you’d like.’”

He would then go on to join the newspaper in 6th grade called, The Lincoln Log, where he was an editor and business manager, with Mrs. Wolin acting as the advisor.

Kernis felt Mrs. Wolin spoke to the students as if they were individuals and not just students. He thought she had the highest standards and expected her disciples to live up to them. It was clear that she believed in them.

“I owe my career to her,” Kernis said.

Kernis would go on to work in his junior high newspaper, The Spirit, and the high school’s newspaper, Bear Facts. He held various types of roles with the newspaper and became editor by his junior year. Throughout his senior year, Kernis worked in an office with a telephone and a typewriter, which sat near the teacher’s desk. Before school and after school, Kernis would spend hours of free time in that office, he remembers.

One time, a student came into the office to see Kernis and started dispelling a story. The student was a former heroin addict and told Kernis about drug use near the school. “I thought to myself, ‘Could this be true?’” Kernis said, recalling the interaction as one of his first big aha moments in journalism.

“I thought that smoking cigarettes was the worst thing that could happen at school. I don’t know if I had ever said the word heroin out loud.”

Kernis went to the police to confirm the story. The authorities’ corroboration of the report led him to write an editorial about it. The story gained attention and was noticed by the station manager of WRVR, a public radio station operated by the Riverside Church in New York City.

The manager wrote to Kernis and asked if he would like to be an intern. As a 17-year-old at the time, Kernis remembers his father taking him out to purchase a dark blue suit jacket from Eisenberg & Eisenberg which he would later wear to the interview. He was offered the position and started right away. This would be his first gig in the infamous big city. 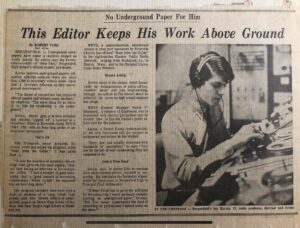 Kernis spent five summers at WRVR where he sorted mail, worked on documentaries and audio promos, and learned how to edit tapes.

In 1970, Kernis attended the University of Maryland, majoring in Journalism with a minor in Art and Art History. He would become a disc jockey, writer, and program director for the school’s radio station for the next four years. 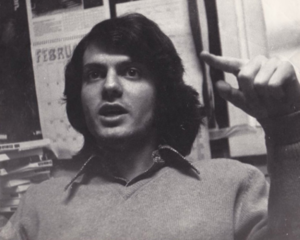 Jay Kernis as a student at the University of Maryland

After graduating in 1974, Kernis landed a gig at NPR. The company had an opening in the promotions department because the person who was employed in that part-time position became pregnant. The young woman left to have a baby and they hired him full-time to fill the offchance opening.

“The head of the PR department listened to my promos from college and WRVR,” said Kernis.

“Since I already worked at a public radio station, he basically said he was going to hire me during the interview. I started that summer of 1974, and I did a promo on my first day.”

Kernis worked on promos for two years for all of the shows. He also went on to help create NPR’s Morning Edition and Weekend Edition Saturday and Sunday shows. 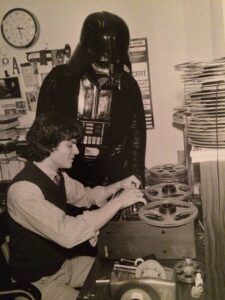 Kernis with Darth Vader in the late 1970s

Several years later, in 1986, Kernis read a story in a DC newspaper about a boy shot in his front lawn who was paralyzed from the waist down. A local philanthropic group was creating a fundraiser for him, and Kernis contacted the group. The group said the family wasn’t interested in doing an interview at the time. Kernis told them to say it was NPR and the family changed their positions, responding in agreement for an interview that would end up being a full-circle moment for Kernis.

“Twelve years later, I’m making a call about a child in a wheelchair, and the reason I got my job is that his mother is the one who left NPR,” said Kernis.

The interview would go on to win a Peabody Award.

“You do this for fifty years, suddenly things come full circle, and they make even more sense.”

After 14 years at NPR, Kernis’s talents were noticed by CBS, and they hired him.

“I knew nothing about television. I could turn a TV on and off, ” Kernis said. He learned everything he knew about TV production at CBS while on the job.

He would go on to work for CBS This Morning, Eye-To-Eye with Connie Chung, and 60 Minutes with Lesley Stahl and Mike Wallace. When it became clear that his two CBS bosses, Don Hewitt and Mike Wallace, would retire, Kernis considered a return to public radio.

NPR reached out again and offered Kernis a role as Senior Vice President of Programming, where he would return to work for another seven years.

“There are things I do in my everyday job that directly come from Jay,” said Eric Nuzum. Nuzum is a co-founder of the podcast production company Magnificent Noise and has worked at NPR for 11 years. During his time at NPR, Nuzum worked alongside Kernis and considered him to be a mentor.

“The inclusive way he handles creations, the way that he empowers teams to have a voice, and also those same tools have a way of preventing so many unforced errors in execution because everyone has a chance to work together.”

For a few years, the President of CNN had been interested in Kernis and wanted to have him join the network. In a move Kernis says he considered a mistake, he left NPR for an executive position at CNN, where he became Managing Editor.

“My first day there, I knew it was wrong for me, “ said Kernis. “I never should’ve taken the job. Almost every day, I thought I was failing. That’s never happened to me before.”

“It caused me to doubt everything. In this business, every now and then, you think, “Am I good enough? Do I know what I’m doing?’. They didn’t tell me to leave, but at that point, I knew I needed to leave.”

Luckily, at that time, Kernis knew several people he had worked with at CBS that were putting on a new show at NBC. NBC hired Kernis as a producer for Rock Center with Brian Williams. 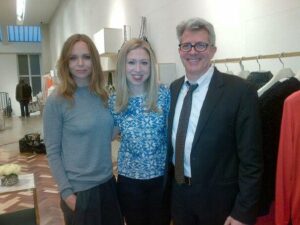 Kernis with Stella McCartney and Chelsea Clinton at NBC in 2013

After Rock Center finished, Kernis finally landed back at CBS, where he currently works as a producer at CBS Sunday Morning.

“I will say this; his only kryptonite is expense reports. Everything else he does remarkably well,” Stephens said. 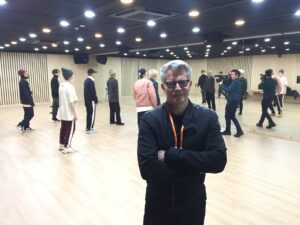 With his 50 years of experience, Kernis has witnessed how different news organizations are run. “To me, it’s all about what you are staffed to do,” said Kernis.

“There’s also the challenge of unique content. Are you producing whatever everyone else is doing, or are you reporting the news in a different and memorable way? Is your audience loyal because what you are doing is of value and has meaning? At the moment, there’s way too much content out there to read, watch and listen to. Who will remain standing?”