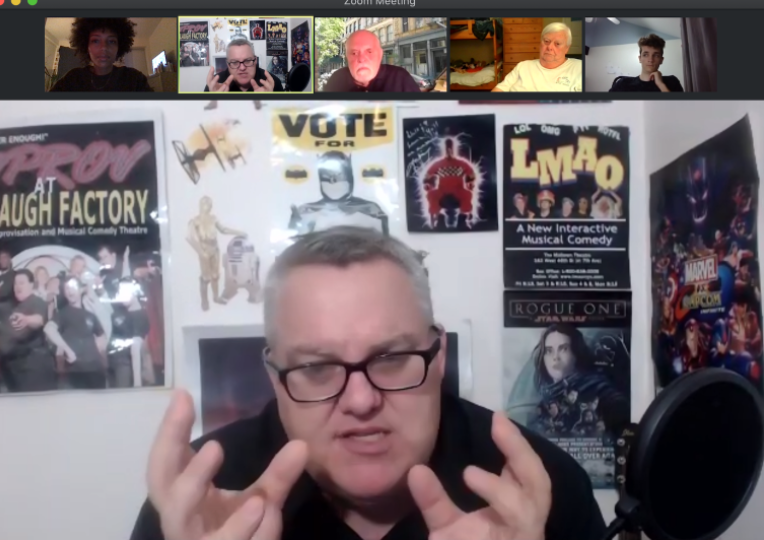 (NEW YORK) — Just before 7 p.m. on a Thursday night, an email about the improv show I signed up for arrived in my inbox: “If you signed up for the show at 8, join us to play at 7. AND vice versa. Same link,” the message read. Confused and slightly unmotivated to attend the event an hour early but fearful that I’d miss something, I clicked the blue Zoom link.

Instant regret sent my throat into my stomach as three older men and one young face gazed back at me. “Am I in the right place? Is this the comedy show?” I asked, my voice cracking as anxiety rose with each second that passed. I was this close to clicking “Leave Meeting” at the bottom of my screen.

Then one of the men, Walter Frasier, a cast member of 8 Improv, as well as an artistic piano director, MC, and teacher who’s produced over 7,000 shows, recognized me from our interview earlier in the week and convinced me to stay.

Comedians who once welcomed hundreds of people into spaces not grandiose enough to keep bodies six feet apart have re-established a presence online, with hopes of mirroring what life was like seven months ago.

Eight Is Never Enough is one such improv comedy group that’s been performing in Times Square since 2002. The cast of comedians, who come together to spread much-needed laughter around the world, is made up of professional actors who’ve performed in myriad stage productions, including off-Broadway.

The group’s online comedy event, LMAO Off-Broadway, is PG-13 and takes place every Thursday, accessible via Facebook Live and Zoom. I found myself in the middle of the show on Thursday.

“Alright Skyler, you’re going to do a scene with Luke. You guys are in Pompeii before the volcano erupts,” said Frasier. Absolutely not, I thought. What did I get myself into? As many times as Frasier told me to let it flow, I froze like a deer in headlights. My conversational skills no longer existed. Not a single thought crossed my mind.

The scenes continued for an hour. Each time my name was called, I sat awkwardly as my cheeks warmed and nonsensical sentences left my mouth. Finally, 8 p.m. struck. Names began to appear along the top of the screen, filing in one by one with cameras turned off. Audience members were indistinguishable from comedians.

Frasier then played a piano intro and announced the host Samuel Van Wyk, ridding one from the anxiety of the unknown. Van Wyk, dressed in a black t-shirt with the blue-splashed Eight Is Never Enough logo plastered on the left side of his chest, proceeded to inform viewers of the “Taxi Rule.” Each time he said the word “taxi,” “Yooo!” would blare through the speakers. This call-and-response was used to end scenes and songs performed by the four comedians whose faces emerged, matching the names written in the center of a small Zoom box.

“Action!” In the span of an hour, Ivana Mendez, Andrea Hernandez Mieres, Evan Shultz, and Van Wyk brought to life the comments swarming the chat. “What emotion are you feeling?” “What’s something you’d find in your junk drawer?” “What’s your favorite food?” Mieres performed a musical skit about her grandmother’s strip steak, while Shultz and Mendez based a movie genre scene on an apple core.

Frasier’s belly laugh could be heard during each segment, his mic the only one unmuted, aside from those of each performer. The atmosphere was comfortable and judgment-free. Viewers were able to laugh behind muted cameras like no one was watching.

The exposed brick, bedside lamp, and wall hanging shoe rack in the frame of select comedians served as a reminder that although our stomachs hurt from laughter, we were still at home, in the midst of a global pandemic.

“Comedy has been ridiculously important for me during this time. It’s the only performance outlet I have,” said Mendez. “It helps us escape from the kind of morbid reality we are facing for a couple of hours.”

LMAO Off-Broadway is available to attend free, or you can donate between five and 20 dollars to support the comedians.