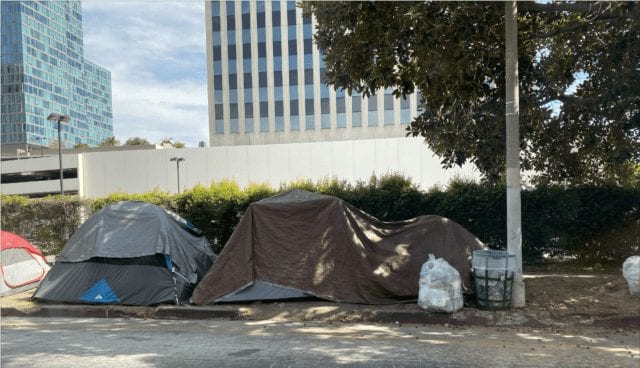 Los Angeles Is Ready to Listen to Its Homeless Population

The escalating homeless crisis in Los Angeles propelled the city on to California’s center stage. According to a recent study conducted for the Los Angeles Times and the Los Angeles Business Council Institute, 95 percent of respondents said homelessness was a serious or very serious problem, and 90 percent of respondents said mental illness and substance abuse are among the underlying causes. A recent analysis by the LA Times found that among 4,000 homeless individuals interviewed, 76% reported or were observed to be affected by mental illness, substance abuse, or physical disability. However, it’s increasingly controversial when it comes to whether mental illness has been one of the causes of homelessness or the result of it. Now, the homeless people living in the Temple City of the greater Los Angeles area are trying to speak out.

Ciedy Cordova, a Mexican American woman, is currently living with her husband, two kids, and two dogs in their car. She used to be a hard worker as an office manager in a dental hospital and was able to support her family. But she still ended up homeless. The situation is taking a toll on her, her husband, and their children.

Nevertheless, Cordova didn’t give up. She kept looking for new jobs. But things have gotten worse as a homeless person, with stereotypes always coming along. Cordova has expressed her love for the city, but it seems the city does not welcome her family.

“Unfortunately, I had a deputy ran over my foot for no reason. He’s trying to arrest us homeless, my van was parking at McDonald’s, but the deputy likes to pick up homeless, I guess he thought homeless being a crime…I wasn’t able to move around to find a job.” she weighed in.

After suffering from homelessness, she gradually became depressed, and both her children and she need therapy.

“Both of my boy and girl are getting depressed because they are considered homeless children among their classmates. we are good people, we are not dirty, We take showers, but we still get discriminated.” she said.

In fact, the city once filed a federal lawsuit by a group of homeless people who were living on the streets. The reason is that the city was trying to clean up the area by throwing their belongings. According to the report, the complaint in 59 pages claimed that the city had violated the constitutional protections on behalf of the city’s policy of cleaning up laws and encampment enforcement.

“People have stereotypes over the word ‘homeless’, and they think all homeless groups of being dirty, alcoholic, drug-addicted, and mentally ill.” Faith Zheng, a volunteer from a Malaysia Church in San Dimas, said to The Click. 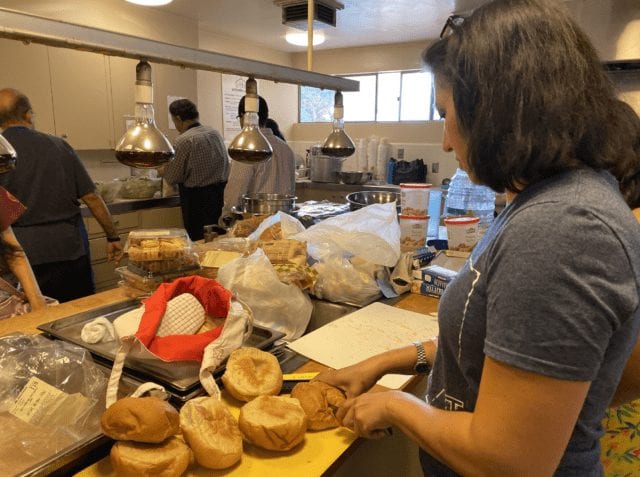 Zheng has started a project of “Feeding the Homeless” since 2015. She went to Riverbed, a location full of bushes in Orange County where more than 200 homeless people gathered to receive dispatch of food. She usually went over at night, because there would be much more homeless back in their tents at that time.

Zheng told The Click that she doesn’t like to reach out to strangers but on the contrary very often sharing food with others. However, One day, her apartment manager let a homeless guy living in the garage, which leads her into the journey of homelessness solver.

“At first, I feel uncomfortable. But one day God told me why not share what you cooked to others like the homeless. Then I started making meals for them. I asked my friend to help me drive outside around to seek homeless persons. At the very beginning, it usually took three hours to distribute five meals because no one knows us. But now it reached 500 meals,” Zheng mentioned.

Although she’s a self-described introvert, she’s managed to rally several churches to support the project. The First United Methodist Church, whose attendees are mostly Egyptian, became the main hub for cooking and “shelter of dinner” with every Sunday afternoon from 3:30 pm to 6:00 pm.

“It’s our duty to take care of the homeless, not only Christian but for all human society. Based on the current situation, I am worried to become homeless one day… Some homeless have jobs, but they can’t afford their living. So, at this moment, we, everyone, should not complain but give it a hand for them,” said Zheng.

The church usually prepares various dishes, but most of the time attendees could expect cabbage, pasta, and bread with melted butter. People came to church with appreciation, smiles, and prayer. They gathered around the table to share their stories, just like old friends who have not seen each other for a while.  It seems nothing has been related to the word “Homeless.”

“They had no choice but to become homeless. The rent is so high; credit is so terrible. but they are really nice, responsible, and caring. Even when I got sick and didn’t show up to them, they were always praying for me. Not all of them are mentally ill or drug addiction. But people would think them all of that way when it comes to homelessness,” Zheng said.

“We don’t just have a housing crisis,” the Supervisor said, “we have a healthcare crisis. We have a crisis of untreated addiction and substance abuse, of mental illness, of the trauma and suffering that comes with poverty.”

Officials have proposed several solutions, one of which is to build new apartments for them. However, a recent study suggests this proposal is not feasible because the costs for the new apartment project are much higher than expected, USA Today reported.

Although the poll provides critical information for the officials to align even more efficient solutions, it seems not being accepted by Irene Ramirez, who become homeless three years ago and now living on the streets of Temple City.

“No…You have to stay with us so that you know our needs. I have been raped after becoming homeless, which made me PTSD.” She said, “It is a kind of stereotype people made when it comes to homeless persons.”

According to the Los Angeles Homeless Services Authority, 44,214 out of 58,936 homeless people are unsheltered, which is three times of those who have been sheltered in L.A. county. The numbers keep rising, as the data shows, the homeless population has increased by 27 percent within a year from 2018 to 2019, resulting in more deteriorate. Moreover, a recent study finds that 20% of college students are claimed to become homeless. 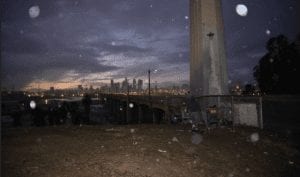 A homeless man in a storm night. Photo by flikr.com

As the storm weather swept over the land, which vitally threatened homeless people’s health, the city has taken action on protection strategies. The public now comes together as well, trying to figure out the issue of their hometown.

On the other hand, the Los Angeles Homeless Services Authority (LAHSA), in coordination with the City and the County of Los Angeles, announced that they would add 1,200 beds for homeless residents during the inclement weather.

“The weather could be life-threatening for our homeless neighbors. There’s no time to waste — we have to do everything in our power to bring people inside now,” said Mayor Eric Garcetti. “These beds will help save lives, and I am grateful to my colleagues on the City Council, our partners at the County and LAHSA, and the service providers who are helping us stand them up so quickly.”

Meanwhile, non-profit organizations began to get engaged to help deal with the crisis.

Care Harbor, a nonprofit, just passed its 11th anniversary, with a commitment to provide free healthcare services to people experiencing homelessness in the Southern California region.
“The homeless crisis in Los Angeles is everyone’s problem,” said Don Manelli, president of Care Harbor. “That is why Car Harbor is devoting an entire clinic day to the special needs of those experiencing homelessness. There’s a great need to bring basic healthcare services to those with no homes and poor access to healthcare.”

The Temple City Coalition for the Homeless, a faith-based volunteer group, formed by several local churches to help homeless people with providing places to take shower, laundry, and distributing food for them.

“We have started this outreach since 2012 at St. Luke Catholic Church. Our ministry is to serve those who are in need of the temple city. We also went out to find out if anybody else is also doing the same service,” she said, “Now we have several churches corporates with each other, distributing food and clothing every Sunday afternoon. We will also hold a service for Thanksgiving and Christmas for those who want to join us for dinner.” The coalition is currently in the process of applying for non-profit status.