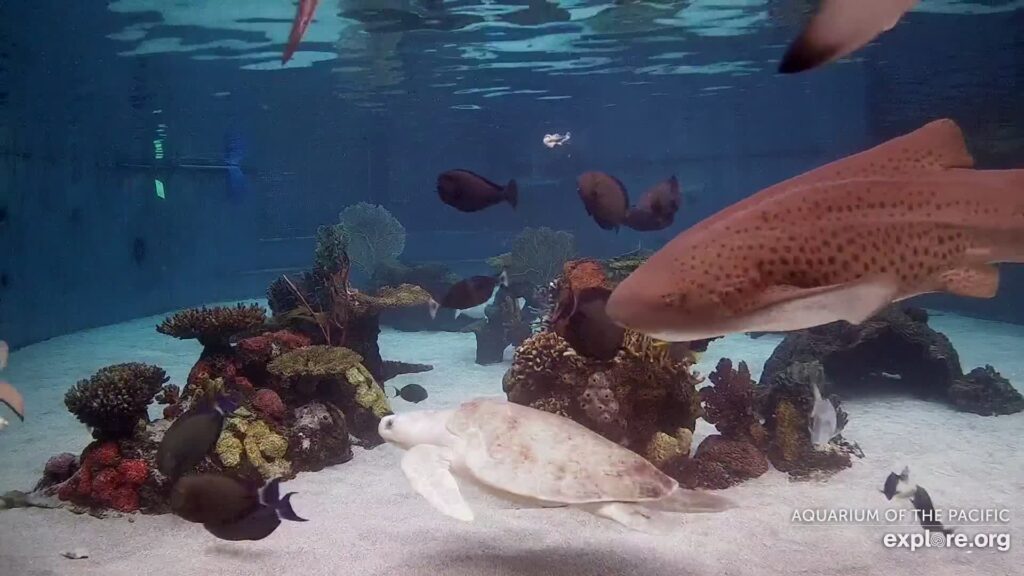 Watching the Ocean 1,000 Miles Away Via a Webcam

Turtles, fish, and sharks swim by in real-time at the Aquarium of the Pacific in Long Beach, California viewable via a webcam at Explore.org. [Credit: Ken Kurtis]

(SOUTH BRUNSWICK, N.J) — The arrival of COVID-19 has made it hard to visit beautiful places. Online webcams give people a way to travel online watching sea creatures, for example, for amusement or distraction during work day. The Aquarium of The Pacific allows online visitors to view some of the 11,000 animals it houses in more than 50 exhibits

Internet travelers can watch the aquarium’s Shark Lagoon cam trained on a tank in Long Beach, California 24/7on explore.org. Ken Kurtis, who works at The Aquarium said that Explore uses webcams to capture this beautiful tank. “All of our cams, including the Shark Lagoon one, are security cams that have been inserted into waterproof housings, and then we figure out a way to mount them inside the exhibits,” said Kurtis.

Watching for a few hours, it seemed that the beautiful sea creatures enjoyed their habitat. Some small fish are courageous enough to swim close to the shark, apparently unconcerned about being eaten. The parrotfish is left out as the smaller fish continue to swim away from it. The smaller fish seem to be intimidated by the parrotfish, but not the shark. The reef sharks swim in a circle but nowhere near each other. As the reef sharks swim closer to the camera, one can see bite marks on their fin. Did one of the sharks bite them or did that happen when they were living in the wild?

The web camera captures the nurse sharks swimming right on top of each other like a game of follow-the-leader. They are the only big sea animals to come close to the camera. Their long fins and polka dot spots hit the camera as they twist and turn. These sharks are luckier because they don’t have any scars or torn fins. The nurse sharks seem to know that someone is watching them.

Feeding time for the sharks is the must-see moment of aquarium watching. “I’ve seen food for the little guys, but not the sharks,” Barbara Gray, a viewer said. Kurtis said that the sharks’ feeding time is around 8:00 PM PST.

The live chats feature viewers watching from their homes or work around the world. “The camera averages around 100+ viewers at any given time throughout the day”, said Kurtis.

“What the heck happened?” asked online viewer ughj0rdan. “I came back from my lunch break, and there was an entire piece of coral missing. I have a desk job, and this is the only thing keeping me sane.” He re-wound his video feed and saw two men stirring up the chow for the sharks. The moderator, ExploreMontogemery, responded, “Don’t worry. They’re just cleaning the tank, and the diver is certified. They clean the tank once in a while.”

Out of every animal in the tank, Lou, the sea turtle, is a fan-favorite. He’s like a hermit trying to exclude himself from other creatures of the sea. He began to swim along and moved away from the other fish trying to swim over. He then crawled in the rock and hid under the sand. As the video continued, I waited four hours to see if Lou the sea turtle wanted to come back out.

These sea creatures, it seems, are really just like humans; some are extroverts, introverts, and ambiverts. Watching from thousands of miles away, the humans can stay in their own shell, just like Lou.