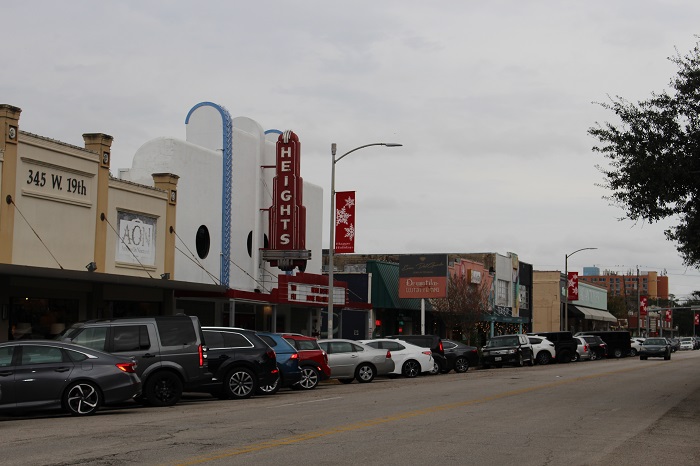 ‘We Could See Each Other’: How These Houston Business Owners Fought the Pandemic

(HOUSTON) —  Manning a shop nestled in Houston Heights, John Dillman, a local used-bookstore owner, greets visitors with a hand sanitizer squirt gun. He guides customers looking for fiction or books on sociology through the aisles. Wearing their masks and maintaining a physical distance, the book lovers browse the store that’s been in the Heights for 14 years. Nowadays, it’s not strange to see these new social rules as small business owners do their best to protect themselves and their clients from the coronavirus.

Before COVID-19 cast a pall over the neighborhood, the Heights was thriving with new restaurants and bars. A February water main break tested the community as business owners took steps to deal with an unstable and unsanitary water supply.

We were trying to encourage people to wash their hands and showing people how to wash [their] hands, we made up a little jingle. And just that following week is when we shut down,” said Alli Jarret, founder and owner of Harold’s Restaurant.

Only a month later, due to a rise in COVID-19 cases, a county-wide shutdown forced all non-essential businesses to close; bars and restaurants were only able to provide take-out or delivery. While some small businesses permanently closed, unable to withstand the challenges of the shutdown, others were able to adapt and maintain afloat until the phases of reopening began in April.

Business is tenuous in the Heights these days. According to ReferenceUSA, 72 businesses in the seven-square-mile area have closed since the virus hit unable to survive the closures, uncertainty, and lack of foot traffic in the once-vibrant cultural hub. By the time they were allowed to reopen, many businesses couldn’t keep up with the costs of required personal protection equipment (PPE) such as masks, gloves, and hand sanitizer. 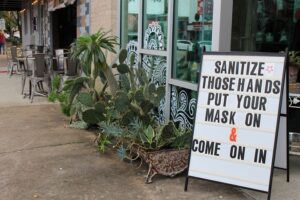 A sign lists the new social norms for shopping during the COVID-19 pandemic. [Credit: Corina Garcia]

“In preparation for Saint Patrick’s Day, Harold’s was stuck with inventory they didn’t need and couldn’t send back. For the first four months of the pandemic, they sold groceries, fresh produce, and meats. Having services like third-party delivery and certification allowing them to provide alcohol to-go helped keep the business afloat.

Even then, they cut their staff from 40 people to seven forcing everyone to take on more responsibilities. Jarret explained that third-party delivery services take up to 30% of revenue so to eliminate those costs, she and other employees personally delivered meals to their customers during the shutdown. In April, doing all of its business by takeout and delivery Harold’s revenue was down 67%.

Dillman said 2019 was their best year on record for Kaboom Books. Things were looking good at the start of 2020, the first quarter surpassed the previous year’s. After the initial shutdown, he reopened on June 16 just to close three days later due to the number of virus cases.

“In order to supplement income, we acted virtually, where people could email us or phone and, and come in, and it drove me nuts. My idea of a terrible time is sitting at a keyboard in my underwear, having to explain to people that the choices that they’re making are not the right ones,” Dillman said.

Teleservices and social media are vital for these businesses to stay alive. Surprisingly, some did not take advantage of this type of marketing which opened the doors for innovation and new opportunities.

Concerned about their livelihoods, a group of vendors got together and founded the Houston Heights Market Group after the coordinator of a different market known to be held every Sunday halted operations. There was no communication to participating vendors or any social media posts. It took the new group six weeks to have their first event on July 26 with 17 vendors from the surrounding Houston area.

“We put out a number of posts throughout the week for the upcoming market, we [sent] out posts, we [sent] emails to followers of restaurants [and] breweries, to followers of other what are now competitive markets in the area,” said Robert O’Bannon, president of the Houston Heights Market Group.

Open communication became necessary since there was none with the previous market coordinator. O’Bannon and Tricia Hrapmann, the market’s vice president, are vendors and own small businesses so they know what vendors want and what a vendor would want from an event coordinator.

“We’re particular also in the vendors that we select to become part of the market as well, we want them to have a hand in what they’re doing. We want them to either design it, or have a special interest in a certain particular product, like we have someone with antique jewelry, and she handpicks those pieces. We don’t want and we don’t allow people who buy stuff…to resell it,” Hrapmann said. “We’re not a flea market. We’re an artisan and a farmers market.”

With all the efforts these businesses took, they still needed support from the community to remain open.

“The Heights supports locals like I’ve never seen before. They really and truly, keep it close to their heart of really supporting small businesses. And I think that’s why the markets in the Heights have been so successful,” Hrapmann said.

“The pandemic show[ed] us that people need human interaction…there was something pastoral [about it] because it was good for them [and] good for us to know that they were helping us, we were helping them, we could see each other. They would write us notes, they would say, ‘How’s everybody doing?’ We [were able to] check on them too,” Jarret said.

As Texas Governor Greg Abbott’s reopening plans played out in phases, some businesses slowly increased capacity. Others were unable to reach their maximum capacity simply because there was not enough room to allow more customers while still maintaining the recommended six feet of social distancing.

“It was really weird because at one point the county said ‘do this.’ The governor said, ‘do this,’ and we’re always doing this. I want to protect our staff. We’ve tried to drill in them that every single person is asymptomatic, including you, including the person that comes in here. If you protect yourself, you’ll protect yourself from the guest and you will protect the guest,” Jarret said. 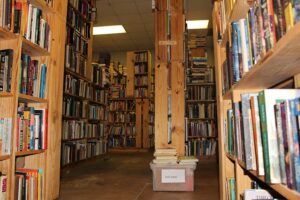 To protect his customers and follow health guidelines, Dillman set up clear plastic bins throughout his bookstore for customers to place the books they picked up but weren’t going to buy. This practice taught him two things: that he may have overpriced items, and it made him wonder about the psychological reasons for someone to put the book down.

The Houston Heights Market asks vendors and customers to wear masks. The distance between tents follows the guidance for businesses from  Gov. Abbott’s office. Slowly, over the course of the summer, they were able to expand from  Sundays only to adding some Fridays and Saturdays. But they’re still in survival mode.

So are many other small businesses. COVID-19 still does not have an expiration date. Cases, hospitalizations, and deaths continue to rise, and there is still no vaccine readily available to the majority of the population. Small businesses continue to find ways to pay the bills and keep the payroll going.

“I felt if we could do half of the gross that we did the previous year that would be fine…After you’ve been in a small business for a certain amount of time, you recognize that some years, just go south. There’s nothing you can do about it,” Dillman said. “Anyone that thinks that they want to get back to what was is mistaken. I think we’ve left what was or even what was imagined behind.”

“You’re just trying to [look] for the opportunity to try to keep the doors open and keep the cogs in the wheel turning, because there are so many people that have closed, and there’s going to be a lot more,” Jarret said.

On Dec. 2, Gov. Abbott announced that Texas will receive 1.4 million doses of COVID-19 vaccines, arriving the week of Dec. 14. First distributions are scheduled to frontline health workers and Americans living in nursing or long-term care facilities. It will be a while before everyone has been vaccinated. Meanwhile, the small businesses in the Houston Heights must continue to find innovative ways to stay afloat during the pandemic. 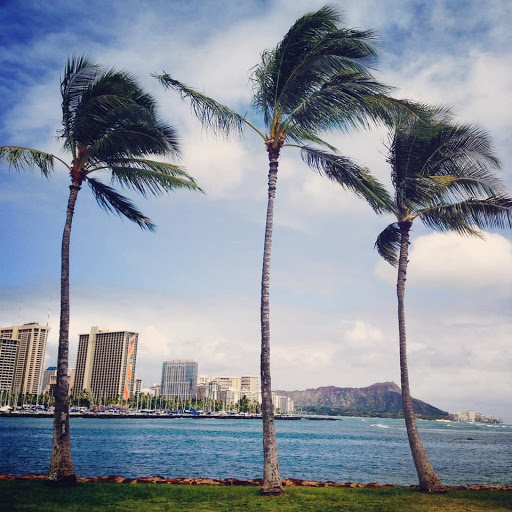 The Pandemic Brings Paradise Back to Waikiki

The COVID-19 pandemic is killing the tourist-dependent economy of Waikiki but reviving the feel-good “Aloha Spirit” that was lost to Honolulu’s overdevelopment as Hawaii’s top visitor destination. 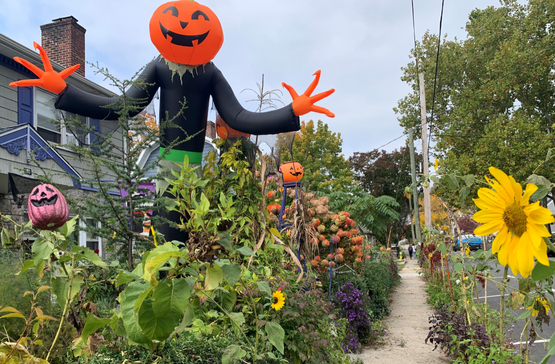 The community of Sleepy Hollow, NY banded together during the pandemic.