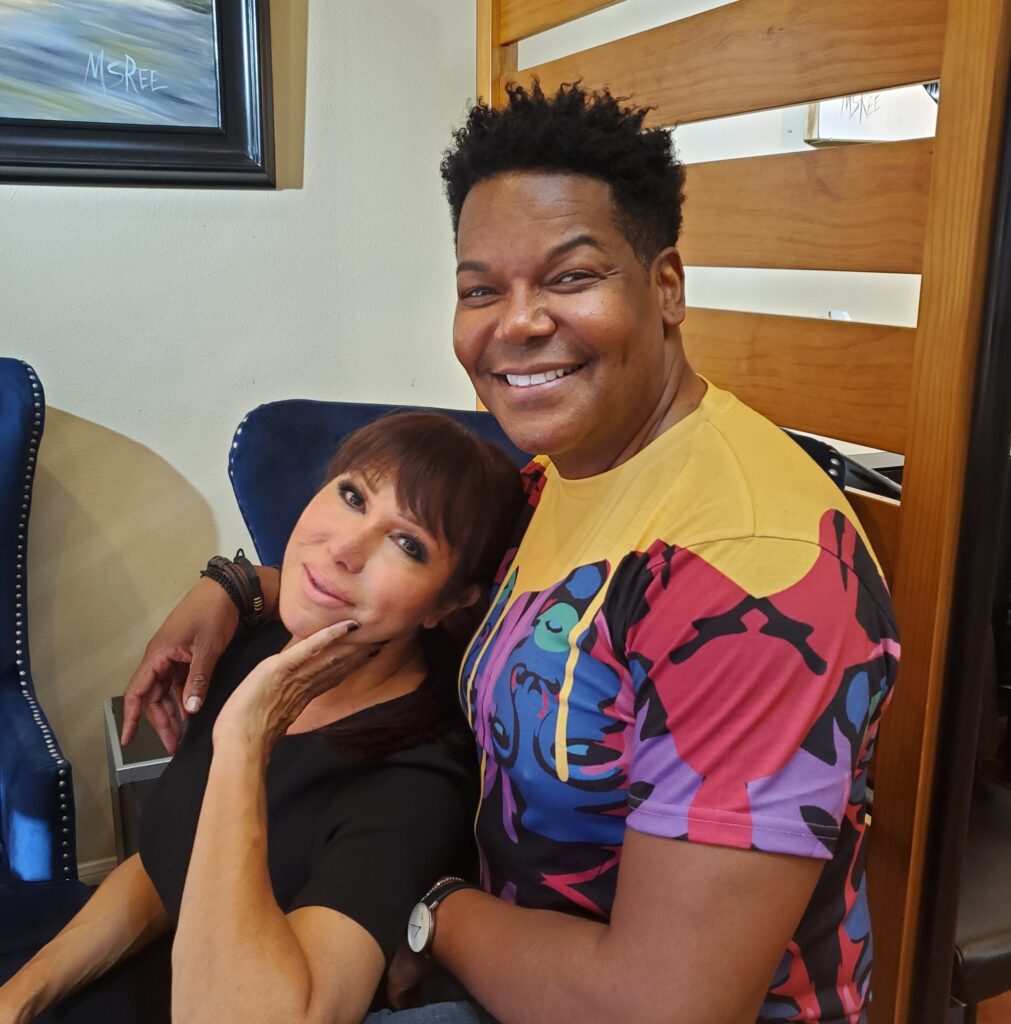 ‘We Had to Create Our Own World’

(SAN ANTONIO, Texas) —Ree Palomarez sits in a blue velvet chair in The Wave, her Alamo Heights hair salon. Standing next to her is AJ Barber, her business partner and high school sweetheart. The two have been together for nearly 30 years, overcoming adversity to make a world all their own.

As teenagers in the 80s, Barber says, “hair was something natural to us.” But it wasn’t something they thought they could make a living doing.

At the time, they had different plans: Barber was going to be a teacher and Palomarez wanted to be a plastic surgeon. She eventually settled on hairstyling but was turned away from cosmetology school because she is transgender.

“The only way I was able to enroll was if I didn’t wear makeup and wore a man’s uniform,” recalls Palomarez, who has long auburn hair and dark brown eyes. “It was at a high school and they said I couldn’t do it unless I came as a man. But I was already transitioning—I already had my boobs and everything.”

Determined to find her place, she enrolled at St. Philip’s College for secretarial studies. But it “just wasn’t fun.”

Barber, meanwhile, was working in retail. He had tried to join the military but was rejected for being gay.

Palomarez took another chance on cosmetology and was able to enroll at Southwest Beauty School, which had a transgender teacher on staff.

“After the second strike I finally went to beauty school,” Palomarez said.

She got her license and applied for a job at local San Antonio salon in North Star Mall, but faced more discrimination because of her gender identity.  “We’ve never hired anybody like you,” the manager told her. “I cannot hire you until I get the okay from the headquarters in Houston.”

Palomarez was eventually hired, but the salon wasn’t all it was cracked up to be.

“I was making $230 every two weeks. [And] they charged you for every product you use.”

After a few years, she was asked by a favorite customer to help with her daughter’s quinceanera. Palomarez did hair and makeup for 15 people and made $670 for a day’s work.

“That was when it clicked—I need to get a little shop and have people come to me,” she said. “So I don’t have to worry about the politics of being transgender or have to hide it.”

To be close to her, Barber learned to do nails and later went to school for hair.

“Ree opened her own business without professional help,” he said. “She figured out ‘if the rent is this much and my electric bill is this much, I need to make this much.’ It just came naturally to her.”

It was as much necessity as anything else, Palomarez said.

“We had to design jobs that worked with our lifestyle. We had to create our own world. if I go [to another salon and] they can’t deal with me dressing a certain way, they’d say ‘Oh well, you can’t do that.’”

At the Wave, she works to create a place where people are valued for who they are. Three-quarters of the staff are members of the LGBTQ community—Palomarez often finds work for transgender stylists who are struggling.

“We have somebody who got fired from a real high-end salon,” Palomarez said, adding that most salons are still hesitant to hire trans women. “They ‘ll say ‘Oh we don’t have room for you,’ she said. “But they always know they can find a job here.”