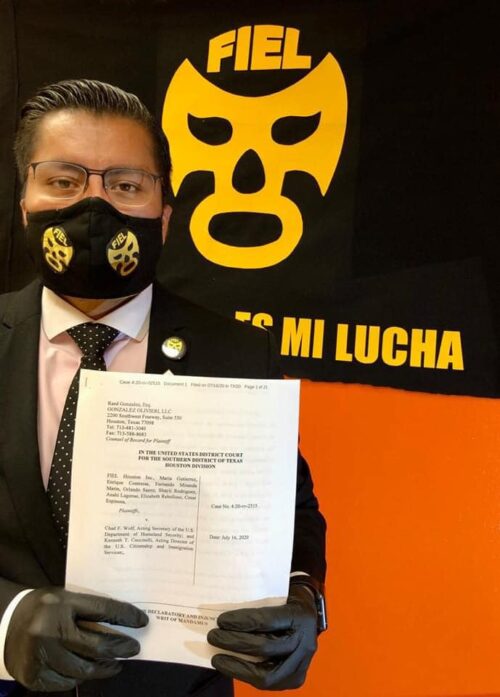 ‘We’re Going to Fight Fire with Fire’: A DREAMer on His Legal Fight With Trump

(HOUSTON) — Cesar Espinosa, has been the executive director of Houston’s Familias Inmigrantes y Estudiantes en la Lucha (FIEL) since its founding in 2007. What was thought of as a club at first, grew into the immigrant-led civil rights organization that it is today.

By organizing and amplifying immigrant youth voices, FIEL has been successful in moving legislation at the local, state, and federal levels.

On July 16, the organization filed a class-action lawsuit against the Trump Administration regarding the U.S. Supreme Court ruling over Deferred Action for Childhood Arrivals (DACA), asking the court to allow new and current applications to be processed in a timely manner. On August 21, U.S. Citizenship and Immigration Services (USCIS) announced they will reject all initial DACA requests and associated applications and return all fees, as stated in a memorandum. Furthermore, renewals will be limited to one year.

The Click spoke with Espinosa about the lawsuit and what FIEL expects to see in the future.

The Click: What was the turning point for FIEL to file this lawsuit?

Espinosa: “What’s at stake is not so much whether DACA is constitutional or not…with Trump’s executive action, it doesn’t give guidelines on how USCIS is supposed to accept new applications. So the problem now lies within the fact that even though people can technically apply they’re not able to because there’s not a criteria for [USCIS] taking applications.”

The Click: People are probably confused because they want to get into this program to get this protection but now they’re stuck in the middle.

Espinosa: “Part of what we’re suing for is [that] the Supreme Court has already sided with the DACA community. Everything technically was in place for the Trump administration to take action. They’re just coming up with creative ways to keep that from happening. There’s thousands of DACA recipients who didn’t apply in 2012 because they either didn’t know, they were not of age, or they were too fearful.”

The Click: Advance parole allows DREAMers to travel outside the US for humanitarian reasons. What chances do you think this could be applied in the program?

Espinosa: “Unfortunately, just like the rest of the DACA program, it’s now stuck in limbo in the courts. [The Trump administration] said that they’ll accept travel abroad on a case by case basis. The only thing that concerns us is people’s re-entry. With COVID-19 and all the travel restrictions that exist, we not only have to think about the fact that people get approved but once they are out, are they going to let back in if they don’t meet the criteria under the COVID guidelines.”

Espinosa: “We don’t expect there to be sweeping changes or progressive changes rather more conservative, more limiting changes that they’ll make. Our strategies are night and day and they’ll be decided on the next six weeks. At the end of the day, we still have to push whatever administration is in power to defend our community and to push for more progressive policies on immigration and other issues that affect the Latino community.”