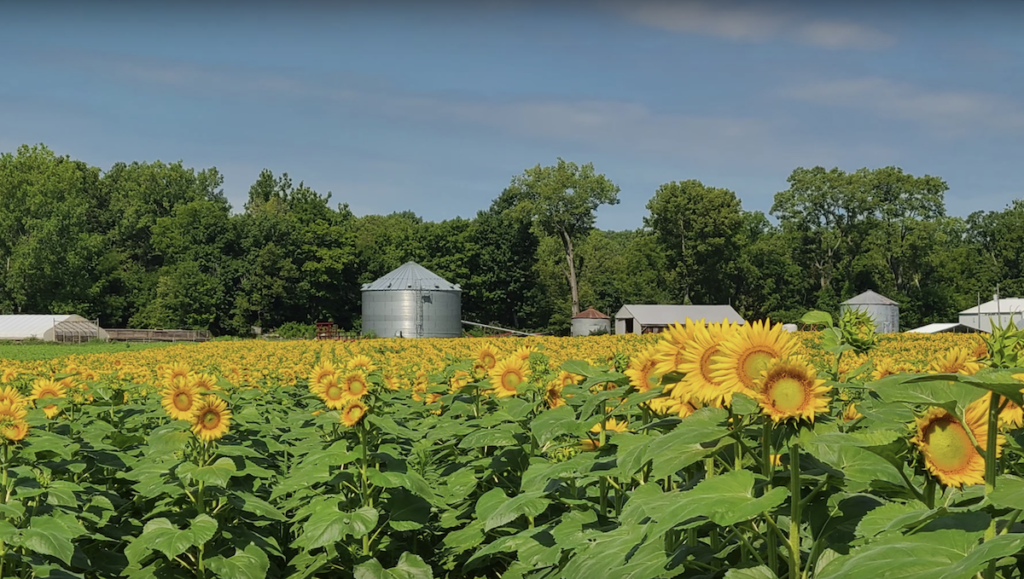 (WHEATON, Illinois) — Brian Lau knows the exact spot on the worn, grassy path where he should look up from the wheel of his tractor. It’s his favorite moment of the ride, and he doesn’t want to miss it. When the people packed into the open-air wagon that he’s pulling get their first glimpse of his field of golden sunflowers, he makes sure he’s looking back at them in his rearview mirror. As if on cue, dozens of pairs of eyes light up at once. Smiles take over faces. Conversation is interrupted by murmurs and gasps.

Coming into view is an expansive golden hue. Closer still, from the brilliant yellow brushstrokes emerges a well-defined, sturdy green stem flanked by alternating serrated, heart-shaped leaves. Then, some 9 feet above ground, a radiant flower head reaches for the direction of the sun it resembles. Zooming out, the stance repeats—by the thousands—until the horizon fills with seemingly endless sunflower fields.

Lau operates L&A farms—he is the “L,” and his cousin Kevin Augustus is the “A” —in the central Illinois town of Paris, population about 8,300. Its 350 acres range from a hilltop to a valley nestled along Sugar Creek. In recent years, Lau has transported visitors across the farm in this fashion countless times. The response that he looks for in the rearview mirror never fails. And he never fails to appreciate it. Over and over, he says, it’s a pleasure to watch: “You just see the happiness.”

Lau first planted sunflowers in 2015. It was a whim: none of his farming neighbors had grown sunflowers, and he didn’t know much about the crop. But there wasn’t much to entice visitors to the farm store during the long winter months, and Lau, a birding enthusiast, wondered if selling sunflower seeds as birdseed might bring in some customers. He planted three acres, and then watched the flowers rise, bright and golden. Lau began to think he might be onto a bigger idea than he’d expected.

Another cousin of Lau’s, who lives about a mile down the road, operated a corn maze in the fall. It didn’t take long for Lau to put two and two together: “If people would walk through a corn maze, I bet they would enjoy walking through a sunflower maze.” The following year, the farm had a new tagline: “Home of the Sunflower Maze.”

This time, the farm sowed 10 acres and advertised the attraction. There was a hiccup Lau didn’t foresee: The blooms only lasted for 10 days, making for a very short season. Still, they’d brought in about 300 people, and he was encouraged by the interest. The next year, he staggered the planting schedule to extend the tourist season. From there, Lau’s business of blooms boomed.

Local news stations broadcast stories about the field. Soon visitors were coming from Chicago and from much farther away: 38 states to date, according to Lau. It helps that the farm (as the crow flies) is about 6 miles from Interstate 70, a major east-west highway that stretches 2,153 miles across the country.

What started as a little birdseed crop had become L&A’s signature attraction. There’s something about sunflowers, says Lau, that gives them “a lot bigger reach than I ever dreamed possible.” 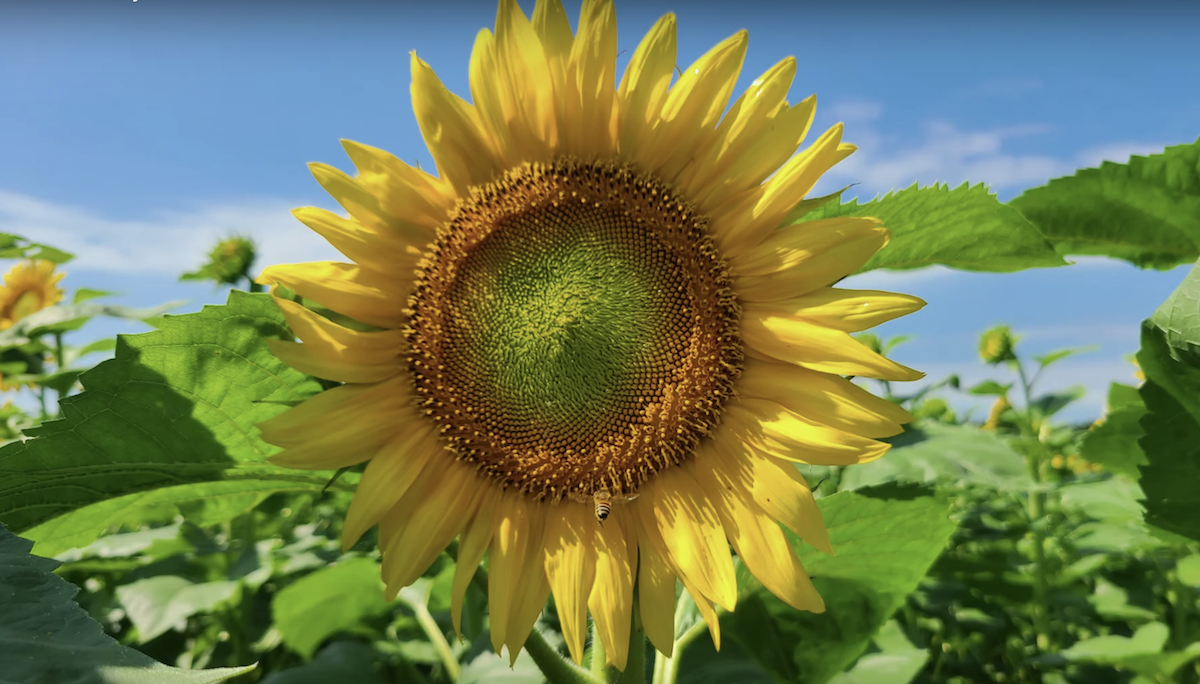 Helianthus annuus, the common sunflower, was first cultivated some 5,000 years ago in the New Mexico-Arizona region. Archeologists say that it may have been domesticated even before corn as a source for food. While wild versions of the plant have lots of blossoms, the familiar domestic one rises to a single, large flower. Or that’s the way it looks; in reality, each flower head is a collection of smaller flowers that only appear to be petals on a large flower that resembles a sun.

The association with the sun also is present in the bloom’s younger stages, when the flower head tracks the sun from east to west throughout the day. This heliotropic motion comes to an end when the plant is in full bloom and reaches an average height of nearly 10 feet. Then, it ceases moving and faces east.

It is this stately, stand-at-attention presence, combined with its golden radiance, that transfixes many who encounter the flower. Sights like this at L&A Farms have left some regulars searching for the right words. It has also left some just searching.

“They really can’t explain it,” Lau says, recalling a group of ladies who visit the sunflowers year after year. “They say: ‘This is our happy place’.” 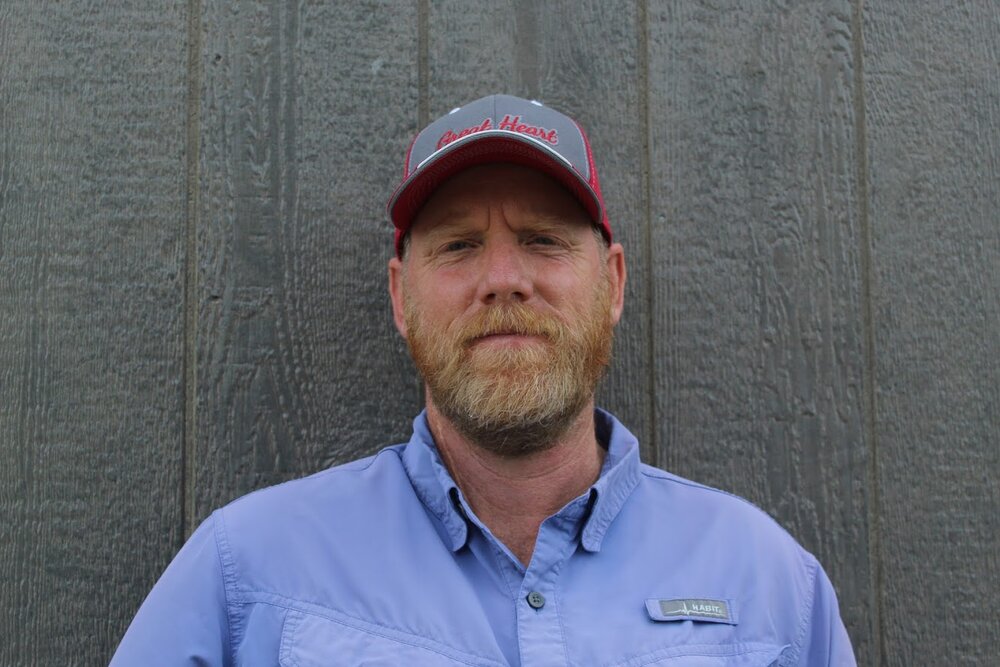 The symbolic nature of the “flower of the sun” grew over time to represent adoration, loyalty, longevity, and hope. Researchers note that its image has been worshipped as a god. Aztec societies predating the Spanish conquest of the early 1500s, for example, worshipped the plant they called “dä nukhä,” which translates to “big flower that looks at the sun god.” Sunflower images were used in their temples.

In Victorian times, the flower was used as a motif for the Aesthetic Movement, which advocated against the industrialization of society. And the image was observed in aspects of interior design—carved in wooden furnishings, emblazoned in iron railings, and glazed onto vases.

The fascination is real. Why, though, is harder to pinpoint.

By the time January 2020 came around, the goal for L&A Farms was to go even bigger with the sunflowers. There would be 30 acres of sunflowers and, hopefully, 40 straight days of blooms. And then, before the season even got off the ground, L&A Farms’ hopes, like the rest of the world’s, began to wither. The novel coronavirus was rapidly spreading across the United States and, by March 21, 2020, the governor of Illinois issued a stay-at-home order, effectively shutting down L&A’s agritourism.

Uncertainty swirled. Lau decided not to plant the sunflowers as early as planned, and when he did plant them, he sowed only 10 acres. A rainy spring further complicated the plantings, but that was the kind of complication a farmer was used to, says Lau. “This whole pandemic was totally something that was out of your control.”

Talks of “normality” ebbed and flowed as summer approached, but normal never fully materialized. Still, a summer—no matter how short—without sunflowers at L&A was economically unfeasible.

Lau finally gambled on opening the attraction in August. The first thing local health officials told him: No wagon rides. Everyone must wear a mask and social distance.

The COVID-19 guidelines transformed a crowd-pleasing maze into a one-way path with little time to linger. “It was like you were on a train,” says Lau. “You just had to keep marching through.” He envisioned all kinds of horror stories—tour groups stacking up on each other, not enough time to snap selfies and portraits along the path. But even though the farm had more than 5,000 visitors over that narrow 19-day window, people were tolerant and things flowed smoothly. Lau felt grateful he could offer a safety valve—“the sheer beauty of the flowers”—to help release everyone’s stress. 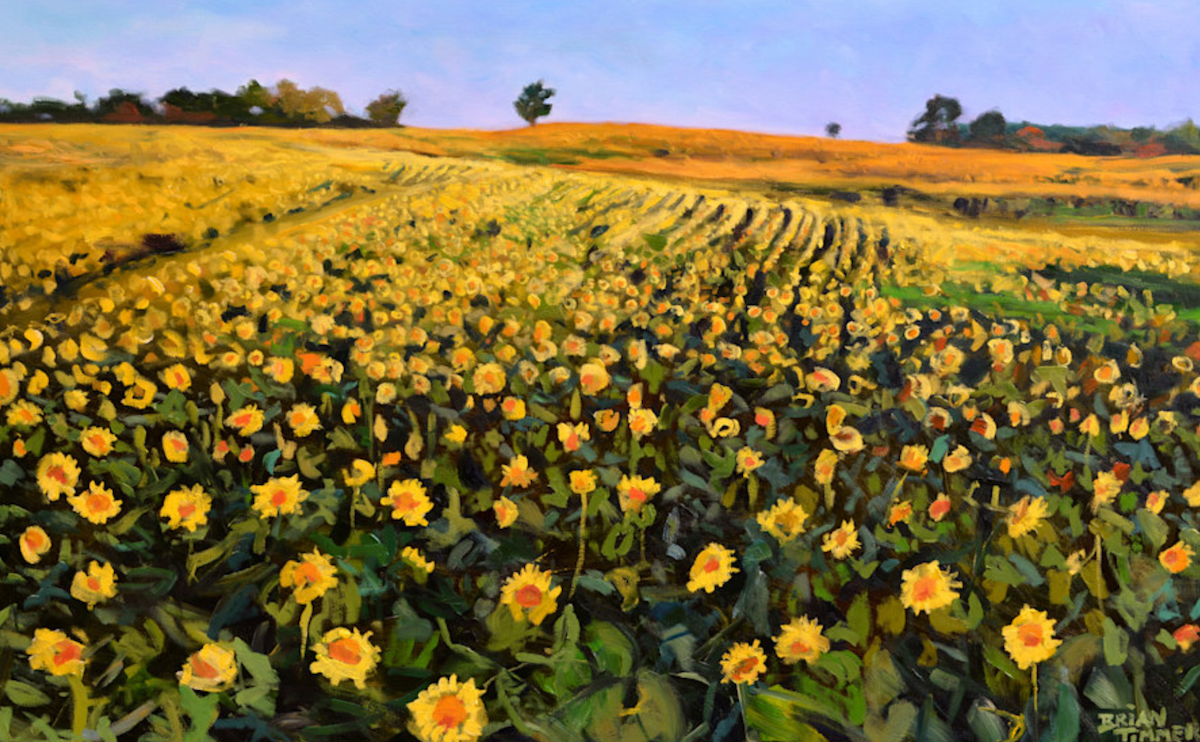 About five years ago, on an early September morning before daybreak, impressionist painter Brian Timmer headed to Grinter Sunflower Farms in Lawrence, Kansas (the self-declared Sunflower State). The timing was crucial. He wanted to arrive hours before huge crowds of sightseers would descend on the field. Most importantly, he was there when the sunrise cast a warm glow across 40 acres of rolling hills filled with sunflowers. To capture the image he desired, he launched a drone outfitted with a video camera. The drone hovered inches above the crowns of sunflowers, coasting toward the tree-lined horizon.

Timmer, a former pastor who also holds a master’s in divinity, rewatched the footage recently. “You see how it keeps going and going,” he said. “It’s like the [sunflowers] are just not going to stop.”

Timmer relied on the video to paint “September’s Glow,” a post-impressionistic piece that became only the second painting of sunflowers in Timmer’s wide-ranging work, which includes dramatic landscapes on oversized canvases.

When he decided to post the video, set to a cheery, bright melody, on his gallery’s Facebook page, it struck a chord. The scene was shared more than 2,000 times and it received more than 300,000 views.  People seemed to be imagining themselves out in that sun-drenched field. “Bet you have one happy drone!” wrote one commenter.

But for Timmer, it’s the image. “It’s just mesmerizing.”

These days, Timmer runs his art gallery near the historic district in Cody, Wyoming, a town (named for “Buffalo Bill” Cody) of about 9,700 located 75 miles outside of Yellowstone National Park’s east entrance. He describes his background in fine arts and theology as a “rare mix.”  He states on his website that he thinks of art “as a medium for examining and expressing thoughts about inner and outer realities.” In the inner realm, his abstract work explores that which cannot be seen. In the outer, he says, he “strives to capture and celebrate the grandeur and detail of the natural world.”

There is something about the sunflower field, Timmer says. Sunflowers are about as tall as we are, or taller. “They almost seem like they are other people,” he explains. “They are all standing together and when the sun goes down, their heads go down.”

He’s never talked about this with anyone, he says. For him, the sunflower presents a worshipful posture. Referring back to his theological education, he calls it a natural “revelation”—the process by which God makes himself known to human reason through natural and created order.

“When I see these gigantic rows of flowers, all standing, all pointed, to receive this sunshine, and to grow, and to be radiating beauty, it makes me think of people,” Timmer says. “It’s almost like creation is worshiping God.”

Sitting to paint such a scene becomes overwhelming, he says. “It’s almost like, should I be doing this? It’s already so grand and spectacular by itself.”

Timmer doesn’t feel a need to solve the mystery of the awe that sunflowers create.  “I don’t have to understand how it was made,” he says. “I can just have peace knowing this world and us have been fearfully and wonderfully made.”

Back on L&A Family Farms, the phone has already started ringing. It’s April and people are asking if they can come see the sunflowers, which makes Lau chuckle. The planting for the maze is another 10 days off, and sunflowers won’t be in bloom until closer to midsummer. “Stay tuned,” the website says.

But Lau’s preparations are well underway. Plans are on track for a comeback season with multiple, staggered plantings and double the number of wagon rides, equipped to handle larger and safely distanced crowds if need be. With COVID-19 vaccinations steadily rolling out and signs of the pandemic waning, he’s feeling confident about a full season of sunflowers. Lau’s excited to see the faces light up after a long dark year.

Until then, he’s already bought the seeds. They’re waiting in bags, tiny and unimpressive. Soon, though, they’ll rise from the darkness of the soil and unfurl their great, fringed heads. When a light appears in the sky above them, they will spend their days following it wherever it goes. Yet, nature’s grand plan shows once the flower buds open, they only face east—a stance protecting the young seeds forming in the heads from weather from the west. When they’re done blooming, and their life cycle is complete, the heads bow down, as if in gratitude for their brief but beautiful life in the sun.