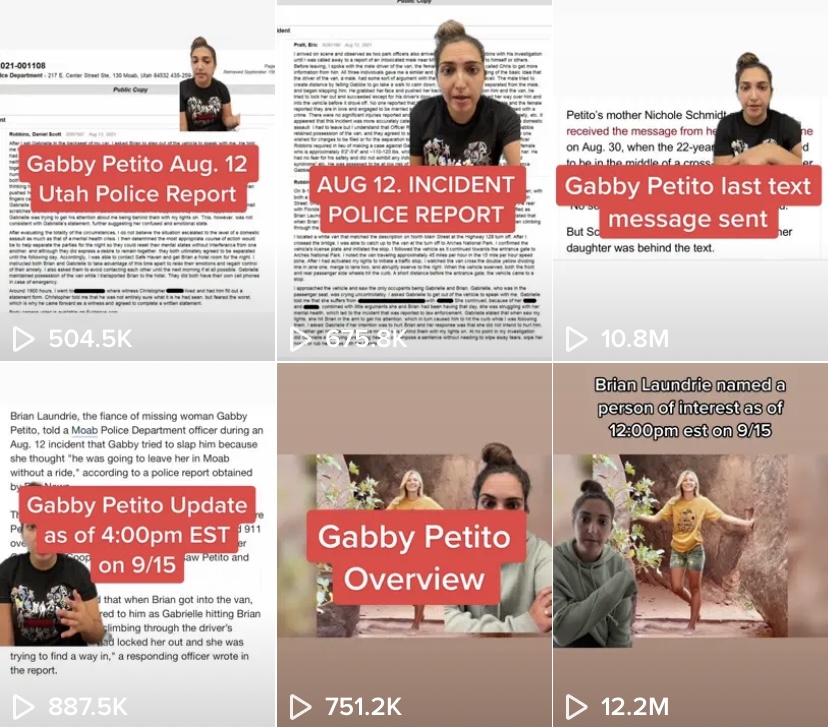 A sampling of Haley Toumaian’s TikToks [Credit – @robandhaley on TikTok]

Why Haley Toumaian, TikTok Missing Persons Source, is a Journalist

Set against a green screen backdrop portraying a smiling young woman in a mustard yellow t-shirt, Haley Toumaian faced her smartphone camera and explained that the woman behind her, 22-year-old Gabby Petito, was missing. Over the course of a few weeks, the 24-year-old Los Angeles based data analyst and true crime podcast host went on to make over one hundred TikToks explaining and investigating the case, a majority of them amassing over a million views, and in doing so, Toumaian became a journalist.

The American Press Institute defines journalism as, “The activity of gathering, assessing, creating, and presenting news and information.” Throughout the evolution of Petito’s case, Toumaian would gather information through anything from press conferences and police reports to theories posted on the internet and potential photographic evidence, assessed what of this information was relevant and evidence-based, and created TikToks presenting the relevant information to her followers. For example, in one series of videos, she selects snippets of body-cam footage of Petitio and her fiance following a domestic dispute before she went missing and breaks down what is learned from each snippet.

What really seals Toumaian as a journalist though is her concern for accuracy and truth. In their book “The Elements of Journalism,” Bill Kovach and Tom Rosenstiel express that journalism is defined by seeking a “practical and functional form of truth.” In an interview with Fox 13 Tampa Bay, Toumaian shared that her approach to her TikToks was focused on “sharing facts” rather than coming up with “crazy theories” like some other accounts following the case are based upon. She told the BBC that she only shares information that has been confirmed by other news outlets or aspects of the case that involved physical proof that she could analyze herself, like in one of her most popular videos where she analyzes the sighting by another Youtuber of a white van similar to Petito’s, pointing out that flip flops similar to ones that have been seen on Petito can be seen behind the van along with a hat similar to Petito’s being in view on the dashboard.

Even further, in an interview with the New York Times, Toumaian explained that when Florida police debunked something she had mentioned in a TikTok, she felt that she “needed to correct the record by posting a new video immediately,” just as a news organization would issue a correction. Toumaian could have kept the original video up in order to keep her view count high but felt a stronger obligation to the truth.

While the Petitio case has slowed down, Toumaian has begun using her platform to spread awareness and information about other missing persons cases. With a special focus on people of color, her new videos are addressing cases that many mainstream media organizations tend to overlook. “It has been 3 months since Lauren Cho went missing and there are still no new leads,” she starts out in a recent TikTok, “but somebody out there has to know something.” Against her green screen backdrop of Cho, she lays out the facts of the case.