(SAN ANTONIO, Texas)—Michelle Mejia, a homeowner who moved to the historical German town New Braunfels in 2019, was first drawn to the town because she frequented nearby Gruene, the rivers, and shopping centers on the east side of I-35. “We went there every weekend, we spent a great deal of time in Gruene and at that little winery and they have a lot of restaurants up there. So that is what attracted us. We also spent a lot of time at the river; at the Comal River so that was in close proximity.” 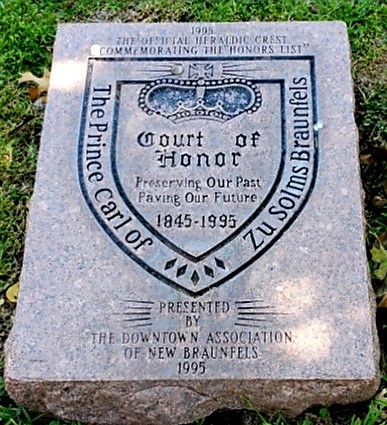 New Braunfels, which is nestled in the Texas Hill Country, 30 miles northeast of San Antonio, Texas and 45 miles south of Austin, has seen a dramatic increase in population and commerce for the past 10 years. With all this growth, the small-town feel of New Braunfels may slowly disappear. “I loved that New Braunfels was a small town and it didn’t have a lot of franchise restaurants and now I realize that the old German town that I had fallen in love with is slowly disappearing,” said Mejia.

The town’s history and culture make it an attractive place to live, because of its prominent German roots. According to the Texas State Historical Association, New Braunfels was founded in 1845, by a noble society led by German Prince Carl of Solms-Braunfels and named after the prince’s home in Germany.

By 1850, it was the fourth largest city in Texas, with 1,723 people, behind Galveston, San Antonio, and Houston.

Its small size helped the city keep in touch with its culture. New Braunfels proudly celebrates its food, music, and festival scene with regular celebrations like an annual German Wurstfest (Sausage Festival) in November, Wassailfest (hot mulled cider) in December, and Wine & Saengerfest in the Town Square.

The rivers and lakes that run through the town entice young and old alike. People float down the rivers all summer long. On the banks of the Comal River the German Waterpark and Schlitterbahn resort are major attractions.

Another prominent German district within New Braunfels is Gruene. Founded by the sons of settlers Ernst and Antoinette Gruene,  Gruene contributes greatly to the traditions and celebrations of the area with live music venues, wine festivals, and open market events. A large part of the music scene, New Braunfels’ sound tends to be more relaxed and authentic, unlike that of San Antonio and Austin. The Gruene Dancehall has been dubbed the “Oldest dancehall in Texas.” It was also the launch venue for Texas country music legend George Strait.

Over the last decade, New Braunfels has been one of the fastest growing cities in the U.S.

With new people flocking to New Braunfell, there has been a desire to improve and grow the area near I-35. Some are concerned that the growth and the addition of mixed-use developments such as Solms Landing on the east side and Veramendi on the northwest side are eroding the town’s German roots.

A word occasionally heard among the city’s German old-timers is auslanders, meaning outsiders or foreigners. New Braunfels is full of auslanders these days. 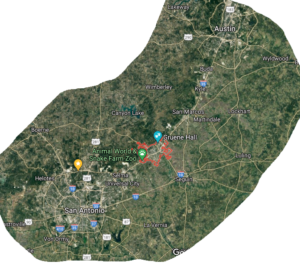 Satellite picture of New Braunfels and the distance between San Antonio and Austin [Credit: Isabella Mata]

Irwin’s sister, Diane Moltz, who helps organize the classes for the kids in the summer and the adults in the winter said, “We’ve said it before to people who’ve just moved here, ‘Here comes another auslander.’ I think it’s kind of regretfully said sometimes. ‘Here goes our city.’”

Carol Kolenberg, a 65-year-old New Braunfels native, does not feel that the town’s heritage is disappearing with the new development. “I don’t think the German heritage is being erased at all. There’s people who come here with alternate ideas. Which has always happened because New Braunfels has had an influx of visitors since 1881 when the train came through.” Kolenberg works at the Sophienburg Heritage Society Museum which partners with the Sophienburg Memorial Association established in 1921. “You know we’ve always had outside influence and things have grown because of that. So we didn’t stay totally cloister German. I don’t think the heritage is going away because the town and all the cultural, historical community decided to work very hard to keep it from going away which includes the architecture of the buildings and other such things so going away.”

Whether or not New Braunfels retains its German charm, change is coming.

James Mahan, Development Designer for Solms Landing says, “New Braunfels provides a very high quality of life for various groups, and you’re seeing the population grow[th] be so strong because now it’s not just catering to retirees, it’s also catering to families, catering to graduates from Texas State and some of these other universities that are saying I wanna work in Austin, but I can’t necessarily afford the price of living. So they head to New Braunfels and commute back and forth to Austin.” 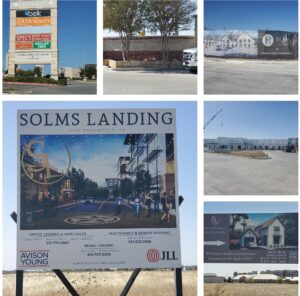 With the development of Solms Landing and other projects, the town is moving eastward, away from the historic area of New Braunfels. “A lot of the higher-end growth has happened out in the hill country which is on the west side of I-35, but we view the east side as a huge opportunity,” Mahan said. “That’s really where a lot of the strategic growth can occur because of the proximity to I-35, the flat land makes building a little bit easier, and there is land left over to develop. Our thought is that the quality of development that we’re bringing with Solms will do nothing but improve the perception of that part of town.”

On both sides of Solms landing are two modern shopping centers, Creekside Crossing and Freiheit Village. Creekside was developed by New Quest out of Houston and is nationally known for businesses like Best Buy, JCPenney, Target, and Whataburger. Freiheit Village has its own local businesses.

Mejia, who lives next door to the development site, was also drawn to the Creekside shopping center, “It has everything, Ulta, James Avery, Target, all the places I frequent all the time. HomeGoods, one of my favorite places. That area was perfect, and I began looking for housing in that area,” said Mejia. After talking to a realtor, she learned there would be a trail connecting her subdivision to Solm’s Landing.

“Solm’s Landing is like the equivalent of Pearl Market in San Antonio and the Dominion in Austin. So then I got really excited because I thought, ‘Oh that’s perfect, it’s gonna bring all that culinary food. We love to eat.’ That was what sealed the deal for me,” she continued.

Developments like these conflict with the New Braunfels German heritage and charm with more national businesses than local ones. “We don’t want to limit ourselves to just national or just small, so if it is the right national tenant or small business they are more than welcome to bring them in. But, I think that our goal was to find a happy blend of the two so that you could have a balance. We don’t want you to walk over there and see everyt 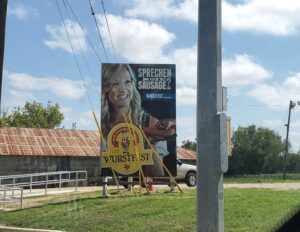 A sign across from where Wurstfest is held [Credit: Isabella Mata]

hing that you can see anywhere else in the country. Cause we just think there is a unique opportunity,” said Mahan.

The original detailed site plan was approved in 2017. By May 5, 2020, the 96-acre project had grown to $500 million because of realignments of streets and some reconfiguration of land uses. This led to changes to some of the planned streets and greater housing density on some of the property.

Before Covid-19, the timeline for completion was five to seven years. Mahan feels confident that with the continued rise in homeownership that there will be enough momentum to carry over for those businesses that may take longer to rebound. His main goal is to bring the newest and highest quality office space to Solms Landing and New Braunfels.

“Businesses will be bringing in jobs and wages, and then if we can bring in those Class A office users, it will be a market that does not exist in New Braunfels. It will have an immediate impact on our area specifically, but then we also think it will be a huge benefit to New Braunfels as a whole because once you get that first office user it proves to everyone else that there is a variable market for it,” Mahan says.

How will New Braunfels save its small-town charm and German roots?

As far as how the locals will work to educate and promote the preservation of the German heritage, Kolenberg says, “We partner with the chamber of commerce and we sponsor the new member program. They have a quarterly program that hosts all the new members, businesses, and new people that come into town and then we educate them in schools. So all of those families are there plus we have a presence on social media. We try to educate as to what goes on in the community plus we write articles for the newspaper every other week.”

Developments like Solms Landing will continue to grow the city of New Braunfels and the locals will continue to commit to preserving the deep German roots, heritage, and charm of this fast-growing city in Texas.