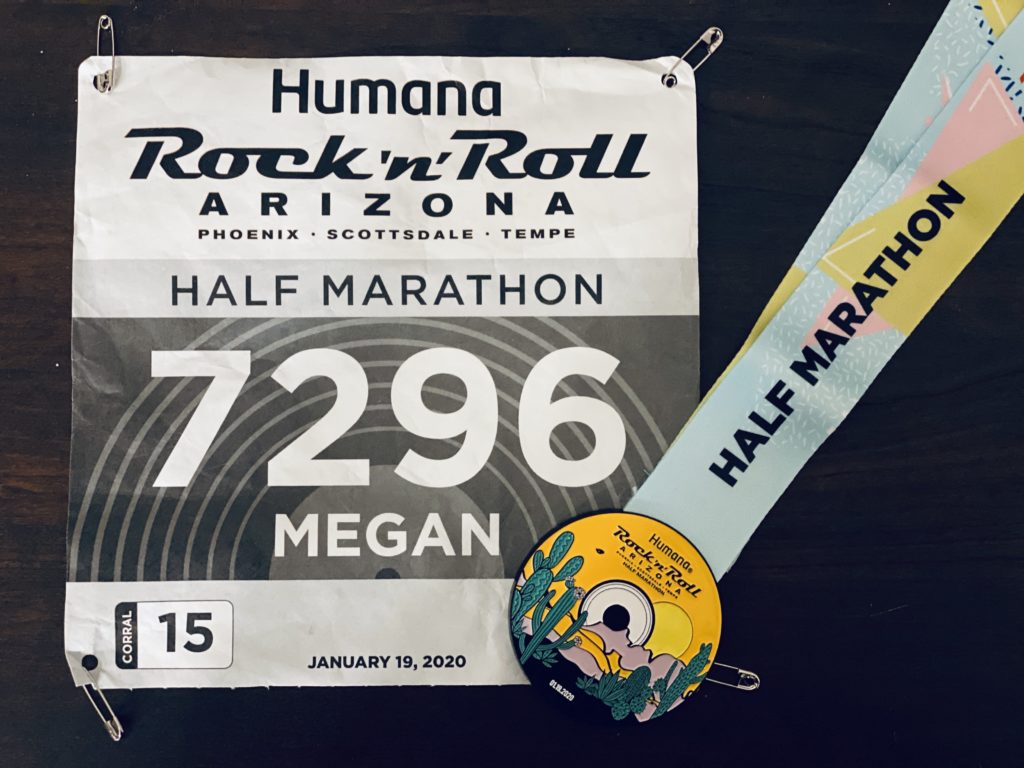 “I’m going to come in last place. And it’s going to be awesome,” I told my life-long best friend Alicia as we signed up for our first half-marathon six months ago.

A year ago, I would have never even considered such a thing. Heck, I wouldn’t have tried a 5k. “I’m not a runner. Not a real one, anyway.” I would say to justify my “no” when friends asked me to join them for any sort of running event.

But what is a runner anyway? Someone who runs. And I run, sometimes. Why do I run? Because it makes me feel good. It’s fun. Is that enough? I decided it was. I decided it was time to change my perspective: I could start saying yes to things that sounded fun, and not because I’d be excellent at them. Or even good.

We live in a world that demands excellence, that sings the praises of the 10,000-Hour Rule to master anything. And, sure, being excellent is fun. It’s fun to do things you’re great at. But it’s also fun to do things that you aren’t great at, and last year I decided that I was done feeling like I had to earn the right to participate in something I wanted to participate in. I was missing out.

And I don’t think I’m alone. All those fitness apps that promise to make getting in shape a fun game, end up just being another competition. Suddenly, my Apple Watch’s new Move Goal has me walking the streets of New York City at 10 p.m. to win this week’s competition against my friends for the most exercise calories burned. Or my new Nike Running Club account has me in a “60 Miles This Month” competition to out run people I’ve never even met. The fun is gone and I’m left with another item to check off my to-do list.

If, like me, you’ve found yourself drawn by the elusive pull of “just a couple more minutes,” you understand the challenge to just participate in something. Whether that means refusing to start or being unable to simply partake for the fun of it, there’s always a lurking sense of duty to the pursuit of being good enough.

That obsession is not uncommon. In fact, you might even be able to label it simply a characteristic of existing in this century.

Avivah Wittenberg-Cox explores the idea of choosing to do things in moderation in all areas of life in Harvard Business Review’s “In Praise of Extreme Moderation.” She starts by asserting that, “Extremism is becoming the norm not only in our professional lives but increasingly in our personal lives as well, from politics and parenting to food and fitness.” She gives life to the idea by painting visuals of peaceful bike lanes in London transformed into competitive racecourses where businessmen try to beat their daily commute time to work and gyms that have taken the relaxing, meditative activity of yoga and turned it into a competition for men.

While discrete goals to pursue moderation in life may help some people achieve balance, I’ve found that sometimes to regain your footing you just need to take a step back and watch pure joy for life in action.

A few weeks ago, I was working with two and three-year-olds in my church’s children’s ministry and all the kids were in a bit of a mood. And if you’ve ever been in a swarm of cranky toddlers, you know that there is nothing joyful about that room.

That is, until the bubbles came out.

Now let me tell you, if you haven’t seen the pure joy bubbles bring to a room full of toddlers, it’s something magical. In fact, it was so effective, I may start carrying around a bottle of bubbles at work to see if it has a similar effect on cranky adults.

But what about the bubbles changed the room?

Bubbles aren’t actually magical. And half of the toddlers weren’t actually good at blowing bubbles; I think some ate more soapy water than they managed to transform into bubbles.

But the children didn’t care. Bubbles are fun. Popping bubbles is fun. You don’t have to be good at blowing bubbles to have fun with it. Nobody cried because they didn’t blow the biggest bubble or the most bubbles. And I think there’s a lesson in that.

Life coach Martha Beck would seem to agree. In her article, “Do You Need More Fun In Your Life?” for Oprah.com, she asserts that, “Having fun is not a diversion from a successful life; it is the pathway to it.” She goes on to suggest that if we are working on activities we find fun, we are actually the most productive, creative, and flexible versions of ourselves.

We had four month to train for the half-marathon after signing up. Some weeks I ran two miles, some weeks I ran 20. I spent a couple of weeks on vacation in Scotland and decided to take a few running tours of the cities I was visiting to cover more ground and still get moving. I highly recommend it! On Thanksgiving, I made two of my friends run a 5 mile Turkey Trot with me on a cold Green Bay morning. They weren’t excited, but they were supportive.

I tried to enjoy every run. Or at least something about each run. I was training to finish, after all, not to win.

After running our 13.1 miles, Alicia and I talked about what the half-marathon experience had given us, other than sore feet and a mild sunburn. As it turns out, it’s a lot, and not just the confidence to take new exercise classes. Alicia is a middle school teacher and as we were training for the marathon, she had the confidence to try some new programs for her students, including opening a student run store at the school, using applied behavior analysis to better teach to each student’s learning style, and trying reading therapy and behavior modification therapy with her students to achieve better outcomes.

When I asked her whether her new confidence is tied to her running, she said yes – but not to the quality of the run . She wouldn’t consider herself a “good” runner by any typical definition; her sprints are about the pace of a long-distance runner’s easy run and her fastest mile is 12:02.

“I believe I am a good runner because I do it consistently,” she said. “So my belief in myself comes simply from making a promise to myself and keeping it.”

She applies the same belief to how she teaches her students. She keeps showing up and she keeps trying. Where fear may have kept her from opening a store with her students previously, her new found confidence to give things a shot now takes over. Where the doubt of whether it will work or not may have crept in and kept her from trying new teaching styles or therapies with her students before, she now moves forward confidently.

It’s been a couple of months since the half-marathon and I still haven’t checked what place I came in or how long I took to finish. Whenever someone asks how it went, I answer honestly with, “It was great!”

And it was: I had two tiers of goals. At minimum, to finish. At best, to run the whole time. I did both.

And I’ve never been so content to be so average in my entire life.