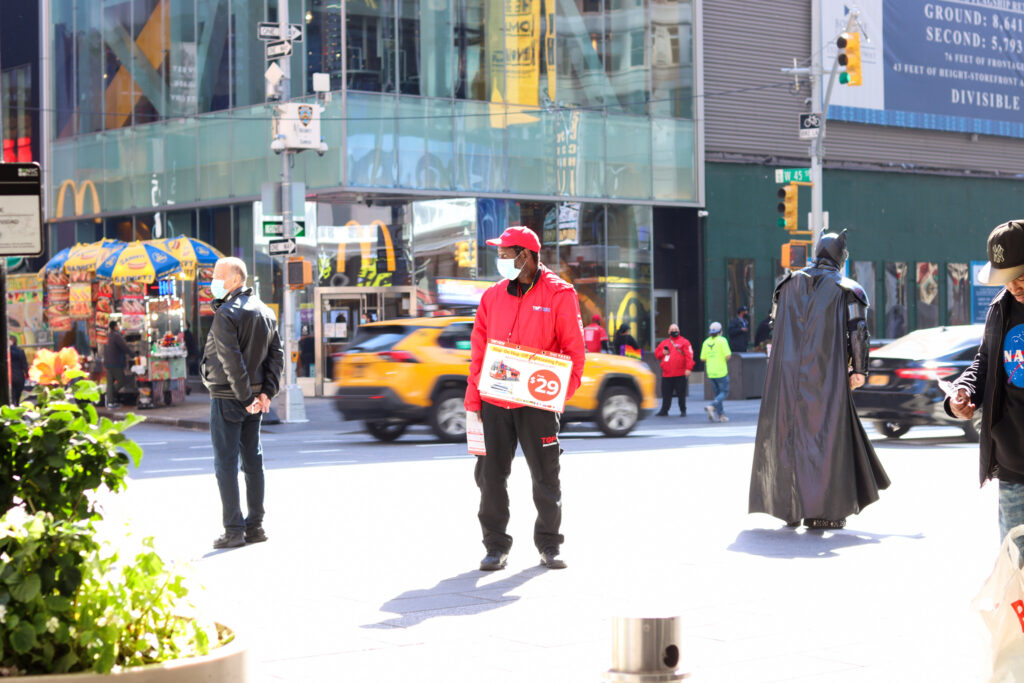 (NEW YORK) — It’s like the sketch was never finished. The artist drew the setting of Times Square — the recognizable buildings, streets, sidewalks, and advertisements — then added its familiar workers — snack vendors, tour bus promoters, Disney characters — and then, they stopped. They didn’t continue drawing. They forgot to add the infamous crowds of people; the colorful, swarming mobs packed into every inch. The artist gave up, or took a break, or went for lunch. But the picture sits as a draft, an incomplete thought.

The first quarter of COVID-19 forced Times Square into a stillness it hadn’t seen in years. Theater marquees were dark and the bustling masses were nowhere to be found. The seal was broken, and the world’s liveliest streets spilled out into emptiness. The area quickly became a symbol of quiet pandemic life.

The crowds have continuously evaporated since March as the ground crew of Times Square helplessly looks on.

Now, just as the neighborhood is starting to wake up, coronavirus case counts are higher than ever, and the city hangs on the brink of another lockdown.

A promoter for Top View Sightseeing New York’s Hop-on-hop-off buses, who declined to give his name, was overly energetic when an occasional potential customer walked by, but when caught alone, his head hung down in defeat. “From Thursday, Friday, Saturday, that’s when it’s beginning to pick up. But during the normal days, no… It’s obvious our company has been struggling; of course, we’ve had to lay off people.” He said he had no time to waste answering more questions. For him, every minute is an opportunity to be making a sale and these days, no chance can afford to be lost.

The backdrop of Times Square has undeniably changed, but these resilient workers hold strong, day after day. Although they come from all over the world, each with a unique history and story to tell, collectively, they keep this chaotic neighborhood running and now stand together as the pillars of a crumbled home.

A brief history of those famous five blocks

Times Square encapsulates the blocks 42nd–47th Streets, between Seventh Avenue and Broadway in midtown Manhattan. The area was originally called Long Acre Square but changed its name in 1904 when the New York Times Tower was built.

In the early 20th century, Times Square was full of high-end theaters, restaurants, and hotels, and 42nd Street was a restless public transportation hub. But the Great Depression brought in lower forms of entertainment and the streets gradually decayed until the ’60s and ’70s flooded them with sex shops, drugs, prostitution, and crime. 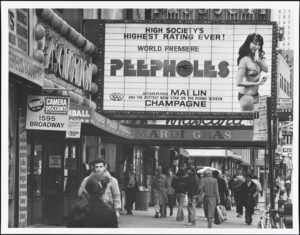 In 1981, Rolling Stone famously declared West 42nd Street the “sleaziest block in America.” For the remainder of the ’80s, crack cocaine ruled Times Square, with drug dealers and junkies replacing tourists and other locals. 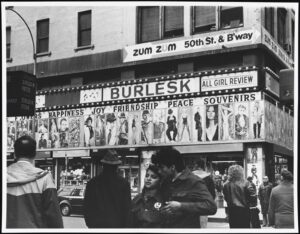 Burlesk, 1983. [Credit: Andreas Feininger/Museum of the City of New York]

The ’90s began a slow climb out of the gutter as the peep show houses were bought by big corporate names, and by the early 2000s the neighborhood was finally resuscitated. Redevelopment by the Theatre Development Fund, Times Square Alliance, and Father Duffy Coalition opened an expanded TKTS booth, the popular spot for discount Broadway tickets, and the vibrant red glass bleacher seats in 2008. Shortly after, all vehicular traffic was blocked.

The most recent transformation project, helmed by The Times Square Alliance, architectural design office Snøhetta, and the NYC Department of Transportation from 2012–2016, provided additional public space and aimed to reflect the “creativity and edge of urban life.” This established the commercialized center most of us are familiar with today.

According to the Midtown South Precinct crime reports, from 1990–2019, the crime rate of this area decreased 88.8% — a clear illustration of a successful rebuilding. On a typical day this year pre-COVID-19, Times Square was a safe, colorful, whizzing landscape of families, entertainers, and wholesome chains like the Gap and Olive Garden.

In 2020, the coronavirus pandemic has overtaken the globe and life as we knew it has come to a screeching halt. The effects of this shift can easily be seen in places like Times Square. Oversized blinking billboards now look different against the deserted gray pavers. The characteristic crowds have been forced into quarantined hiding. 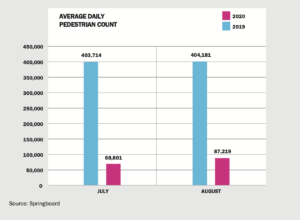 The Times Square Automated Counting System consists of 18 cameras providing 24/7 data on the number of people in the area. Usually, there are between 380,000–450,000 pedestrians there every day. That doesn’t account for cars, buses, bikes, and trains passing through.

According to the Monthly Indicator Reports, in August 2019 the number of average daily pedestrians was 404,181. One year later in August 2020, that number was just 87,219 — a drastic decrease of 78.4% due to the pandemic. The following month, in September 2020, as New Yorkers started feeling relaxed about restrictions, average daily pedestrians modestly increased 21.4% up to 105,852.

Luis, who is from Puerto Rico, has worked for the Times Square Sanitation Department for more than 20 years. He drags his large trash can through the red tables as usual, but these days there are fewer people to dodge and a lot less litter for him to pick up. He doesn’t seem to mind the slower pace. “Yeah, it’s true! Different. But I’m here, I don’t care. And now?” He opens his arms out wide and looks around with a smile. “When everything is normal, it’s noisy, crazy.” On this day, he takes his time breaking down an old box and hums to himself. 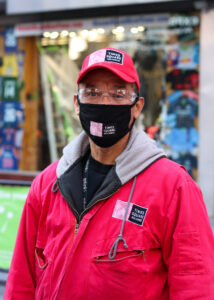 Luis has worked for the Times Square Sanitation Department for over 20 years. [Credit: Sarah Parker]

It’s not just a change in foot traffic that leaves a noticeable mark. The neighborhood has undeniably taken a large financial hit with theaters closed and tourism all but extinguished. The ripple effect is felt everywhere.

In August 2019, Broadway ticket sales grossed an average of $33,191,053 per week. The same month in 2020, that number was zero. It will continue to be zero until at least next summer, when shows are slated to reopen.

Robert John Burck, better known as The Naked Cowboy, has been a fixture in Times Square since 2009. New York City locals are used to him, so just like the other costumed characters working the corners, he relies on visitors to pay tips. “It’s dipped down and up and down. But you can see. If I’m making any money, it’s tourists.”

The attendant of the snack stand on the corner of 44th Street and 7th Avenue, who declined to give his name, is originally from India but has been in New York 29 years. He shrugs his shoulders. “It’s OK…Yeah, funny time, not busy, very quiet because of coronavirus. It’ll pick up maybe like January.” His shelves remain fully stocked. 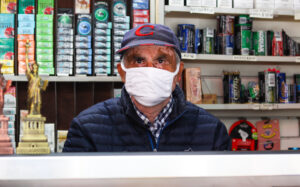 A snack stand attendant sits among his product, waiting to make a sale. [Credit: Sarah Parker]

Occupancy rates of hotels in the area were at a strong 94.6% in August 2019. One year later, they’re struggling to hold on at around 25%. This September, occupancy slipped even further to just 22.9%. With the initial COVID-19 international travel restrictions still lingering, and new ones expected to take shape soon, these numbers will remain problematically low for the foreseeable future.

One Times Square worker who doesn’t get to pound the pavement with the others right now is Timothy Regan, a brand ambassador for Street Meet Promotions, the company that hands out flyers for discounted Broadway and off-Broadway tickets. He’s at home in New Jersey, furloughed since March 12 along with the company’s other 30 employees.

In a phone interview, he said, “I would commute in — I would take the bus, there’s a bus stop at the top of my block, it takes me 30 minutes to get to Midtown — and that was my life. It’s certainly weird [not being there]; I miss it.” Until the entertainment industry reopens, it’s a difficult waiting game. “I’m still in touch with my boss and we’re checking in and he has full plans to come back when we can. So we’re all just trying to keep afloat.”

According to a recent report by Patrick McGeehan in the New York Times, a forecast by the city’s tourism promotion agency, NYC & Company, projects tourism not returning to its pre-pandemic level before 2025.

Times Square has taken on many identities through the past century and will undoubtedly continue to twist and turn as our world evolves. The current pandemic is testing the area’s resilience. But if its hard-working people are any indication, this famous neighborhood will always keep rolling, no matter what.

Regan, remembering how he initially thought his company’s hiatus would be only one to three months, tries to keep his optimism as the pandemic drags on much longer than expected.

“Yep, this is inconvenient. But we’ll come back. We’ll see you in a bit.”