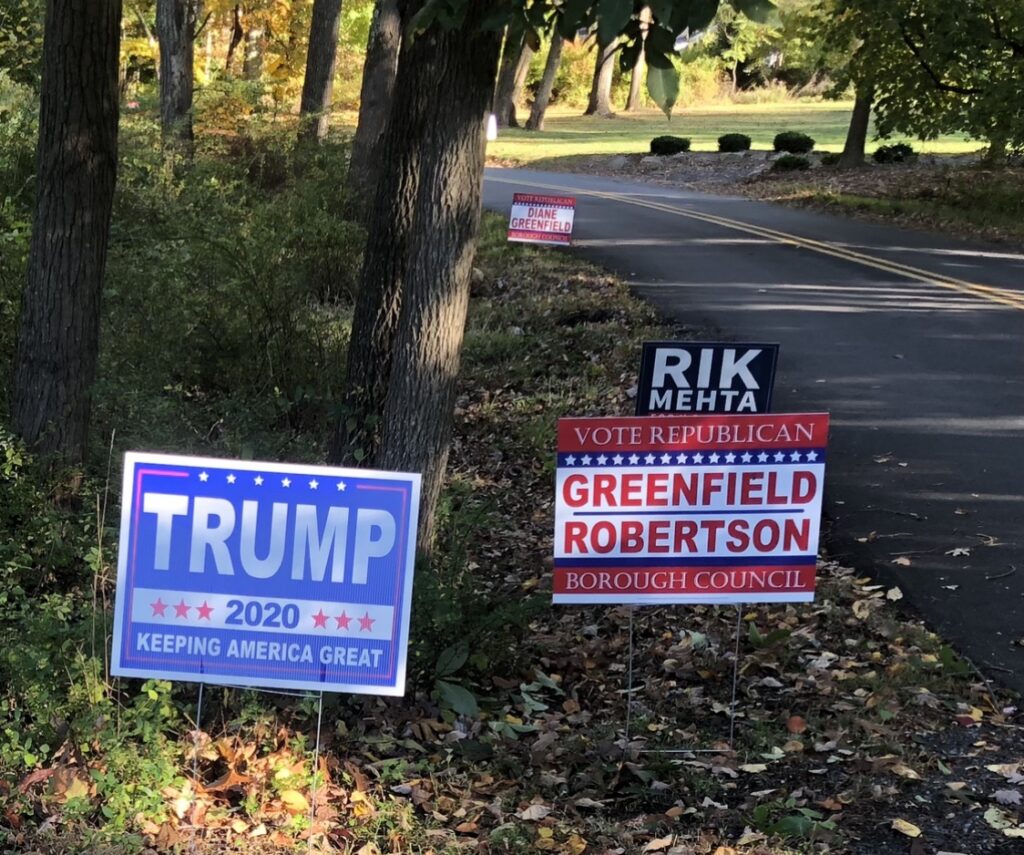 (BERNARDSVILLE, N.J.) — There is nothing quite like seeing Donald Trump’s face superimposed on John Rambo’s body for the first time. It’s comparable to seeing the Statue of David: you notice how unnaturally vascular the subject is, and begin thinking, “how does an artist even conceive an idea this profound” and “surely, this is a piece of artistic lore” and “wasn’t Rambo, like, famously a Vietnam veteran?”

In a 2012 interview with NPR, Costas Panagopoulos, a political science professor at Fordham University, said it is unlikely yard signs are the decisive factor in elections, but may be useful for “mobilizing voters” and spreading awareness about an election. In 2018, Jonathan Krasno, a political science professor at Binghamton University in New York, told the Chicago Tribune that signs were a “physical manifestation” of campaign efforts and support.

No matter what the experts say, political signage is hugely popular in the rural town of Bernardsville, N.J. From small, two-by-two foot signs for a borough council candidate, to the grand, multi-medium displays erected for the presidential election, Bernardsville residents are wearing their beliefs on their sleeves – or more accurately, their trees.

“It’s about letting people know where we stand,” said a retired Bernardsville resident with a five-sign Trump display. The resident declined to give their name.

When asked in an email why his yard was festooned with Trump gear, another resident who also declined to give his name wrote, “just showing where our support lies.”

Rosemary Brennan, a self-described liberal Democrat whose yard hosts one sign for Biden and one for Tom Malinoski, the Democratic candidate for the US House of Representatives, said “Bernardsville can be isolating for a Democrat.” She said that putting her support “out there” in the form of a sign feels cathartic and positive. Brennan’s street is one of the many that is peppered with a high volume of metaphorical elephants and donkeys.

Political signage does not come without its perils. Multiple residents I spoke with regaled me with histories of vandalism and theft. One Republican voter said he dramatically increased the volume of signs and set up a camera system in response to a banner being stolen.

Since 2016, Bernardsville Police say they have responded to fourteen reports of theft and related criminal mischief pertaining to political signage. Eight of those reports cite thefts of signage in support of Democratic campaigns and liberal causes like Black Lives Matter.

This election season feels inescapable. According to NPR, President Trump and Vice President Biden have spent over $2 billion dollars combined, creating a ubiquity of election-related commercials, signs and merchandise–while the stakes of the election keep many Americans up at night. Politics permeate family conversations, social media accounts and in Bernardsville, New Jersey, quite a bit of real estate.