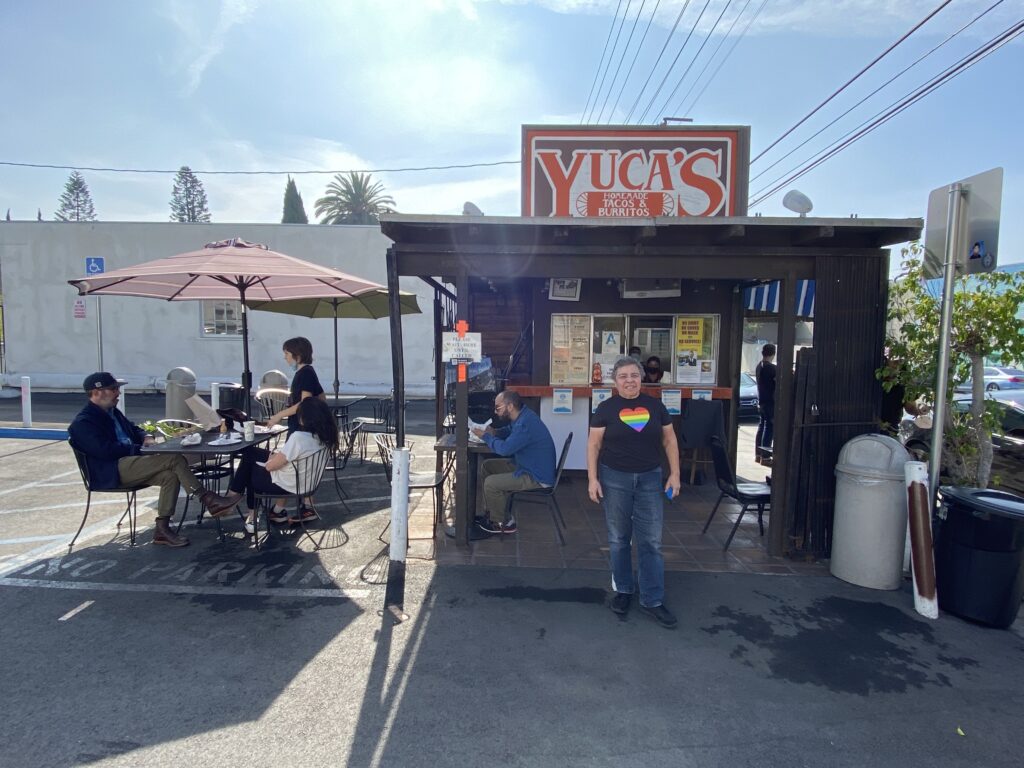 “If you ask anyone on my staff, Yuca’s is one of their favorite restaurants in the district,” said Councilmember Nithya Raman [Credit: Bill Meincke]

(LOS ANGELES) — Cochinita pibil tacos: Yucatan style pork in a tortilla topped with a special salsa that contains onions, tomatoes, and cilantro. In a town filled with gourmet tacos, it is a simple recipe that goes a long way.

In the heart of the Los Feliz neighborhood in Los Angeles lies a 10×10 shack that has been serving the community $4 homemade tacos and hamburgers topped off with a bit of Yucatan flavoring for over five decades.

As one walks north through Los Feliz, navigating rocky sidewalks that trees have uprooted, layers of history and the neighborhood’s multiple identities reveal themselves.  The decrepit 1907 craftsman home, once owned by Lucille Ball, on Franklin Avenue and the stunning Los Feliz Theater, built 1923, around the corner on Vermont Avenue. Continuing north through the neighborhood the ​California landmark of St. Mary of the Angels Church, Hollywood, founded in 1929, pokes its steeple through the sky. A washed-out yellowed brick apartment building from the 1970s, housing the young and the old, sits next to a million-dollar two-bedroom home.

In the middle of it all sits the steadfast underdog that goes by the name of Yuca’s.

Surrounded by TV studios, the Hollywood Hills, and just a few miles away from the legendary Hollywood sign, this square shack, nicknamed “The Hut,” is just as famous to East Side Angelinos as places like Pink’s Hotdogs or Canter’s Deli.

With wildfires, droughts, and earthquakes getting progressively worse since Yuca’s opened its doors in 1976, it seems impossible that this once former shoeshine booth would still be thriving as a taco joint. Its brown and orange sign calls to the pedestrians passing by, and the scent coming from its pocket-sized kitchen is inviting. Burritos, tacos, tortas, hamburgers, and hotdogs waft through the air and drag you to the counter like a cartoon character. Same as it ever was through nine U.S. presidents, natural disasters, a recession, gentrification, and a pandemic.

Yuca’s Fires Up Its Grill

Yuca’s was the inspiration of ‘Mama’ Socorro Herrera, who immigrated to Los Angeles from Yucatan, a Mexican state near the Guatemalan border. She missed a good, home-cooked meal, like anyone who relocates. When it came to comfort food, Socorro was a master chef— so much so that she was encouraged to spread her delicacies to the surrounding neighborhood of Loz Feliz.

“It’s totally my mom,” said her daughter Dora Herrera. “She was an excellent cook. She had the dream. She used to say from time to time, “‘It’d be so nice to have a little spot where I could just make food and people line up for blocks. I can take care of them.'”

Socorro did it all. She was a cashier, cook, and administrator with a little help from her husband, Jaime Herrera, and her family. Her business plan was to supply the community with a taste of home and provide for her family. She did just that. “Try it and love it or, we’ll give you double your money back,” the Herrera family promised.

When Yuca’s opened, Socorro, like any careful entrepreneur,  was worried about opening a business in a struggling neighborhood. “It was a little down. It was a little sketchy. People weren’t sure if they wanted to open there,” Herrera said. While Los Feliz was a little slower to develop, other parts of the city were starting to boom. Mayor Tom Bradley, elected in 1973, was the key architect behind the idea of multiple business hubs within LA, like Century City and Koreatown. By the next decade, LA and Los Feliz began to pullulate.

There were arduous times for the Herrera family as well. During The Great Recession, in 2008, Yuca’s found itself struggling to bring in new customers. A dozen years later, they were facing a pandemic like every other business in LA. For Dora and her sister, closing up shop came unbelievably close in the Spring of 2020.

“My sister and I had a conversation on a Friday,” said Herrera. “And she says, if we don’t get the federal money, we’re going to have to close on Monday. And thankfully, the money drops on Saturday.”

Herrera applied for government assistance in April of 2020, and on May 1, Yuca’s received a Paycheck Protection Program (PPP) Loan with an initial approval amount of $22,967.

“We started paying stuff off on that Monday. But it was pretty close,” said Herrera.

The rapid emergence of the pandemic negatively affected businesses almost overnight, predominantly minority-owned businesses. The National Bureau of Economic Research (NBER) reports that in April 2020, nearly 32% of all Latinx-owned businesses had closed at least temporarily since the start of COVID-19 and 41% of Black-owned businesses also closed. “The number of active business owners in the United States plummeted by 3.3 million or 22% over the crucial two-month window from February to April 2020,” said the NBER.

Nevertheless, Yuca’s commitment to the community helped this tiny hut surrounded by a growing number of splashy restaurants and stores survive through the tough time—with a bit of help from Tamale Saturdays. 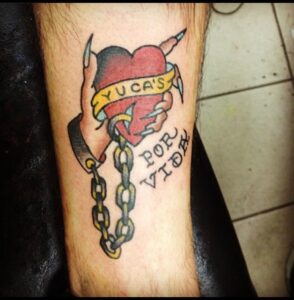 Callahan Christie shows off his love for Yuca’s with a Yuca’s tattoo. [Photo Credit: Cal Christie]

Callahan Christie, 32, resides in New York but was born and raised in LA. “I grew up going to Yuca’s,” Christie said. “It became almost a daily experience. One that you wind up sharing with so many people too because Yuca’s regulars are real regulars … high schoolers, construction workers, firemen, gardeners, soccer moms, doctors, assembly people, and movie stars. I think that is one of the biggest impacts, that it was and still is, a real gathering place for the community.”

The community has been served almost the same menu for over 40 years. Once Socorro found a recipe that worked, she did not change it. A simple recipe went a long way for the Herrera family. One of the most beloved items on the menu— Yuca’s hamburger. Mayo, mustard, ketchup, onions, tomatoes sit atop a burger made to order. The meal may take a little longer, but it is worth the wait for many. Burritos, tortas, and tacos fly out the small ordering window, and tamales, only available on Saturdays, don’t last long.

Yuca’s found ways to adapt to the changes but, at the same time, staying true to Socorro’s vision. In the 1980s, Herrera formed a local group called the Business Improvement District. “Becoming ingrained in the community was key,” said Herrera. The group started street fairs, holiday feasts, and other events to get local businesses involved in the community. The four dollars a Los Feliz resident would spend on a carne asada burrito would be spent at Yuca’s and not out of the community. “Money was going to circulate and stay there,” said Herrera. “I think people like that because they’re invested in their community.

After five long decades, the community knows just how important Yuca’s is to its identity.

“If you ask anyone on my staff, Yuca’s is one of their favorite restaurants in the district. It is a Los Feliz staple, representing the best of the neighborhood’s charm and cultural vibrancy,” said LA City Councilmember Nithya Raman of the 4th District. 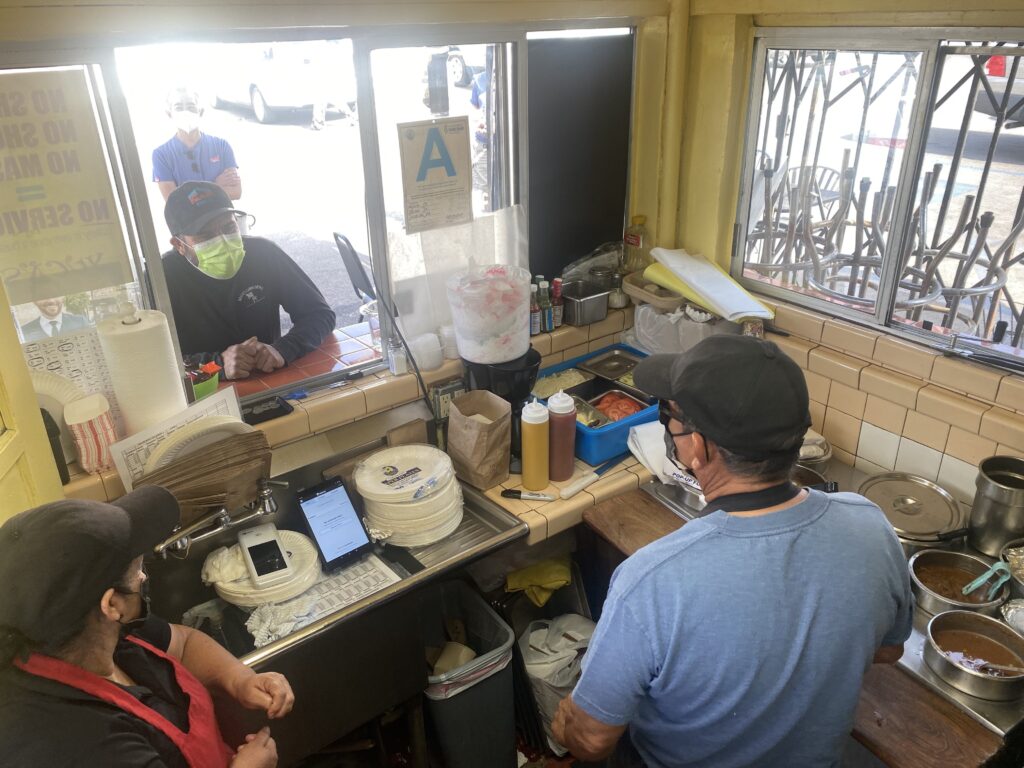 “Once Socorro found a recipe that worked, she did not change it.” [Photo Credit: Bill Meincke]

As Yuca’s 50th anniversary approaches, there is a lot to be nostalgic about, like winning the James Beard Award in 2005, being sticklers about napkins that led to a feature on Oprah as the “Napkin Nazi,” and saying hello to the friendly faces of the neighborhood. Herrera built an email club with more than 500 subscribers. In the last decade, she has built up a social media following on Twitter, Facebook, and Instagram with almost 10,000 followers.

There are issues that small businesses in the community like Yuca’s still face, like the rising cost of rent and gentrification. The neighborhood identity has changed since 1976. Celebrities like Vanessa Hudgens and Emma Roberts stop into Blue Bottle Coffee for a $5 cup of joe. Producers and writers shop at the luxurious grocery store Lassen’s, a self-proclaimed “purveyor of natural and organic foods.”

The effect Covid-19 had on the neighborhood is noticeable. There is a closed Mediterranean restaurant across from a papered-up Mexican joint, once set to reopen before the pandemic, now halted. Like Blue Bottle Coffee, the more lavish places found ways to survive. All-Time, a restaurant serving up $30 lamb ragu as big as your fist always has a line down the block jonesing to get seated next to a celebrity at dinner.

“Part of achieving a truly equitable recovery is working to ensure small businesses like Yuca’s, that help to define and diversify the areas they are in, are not only able to remain in business but able to flourish,” said Councilmember Raman.

Yuca’s doesn’t see itself as the underdog, but rather just Yuca’s. A friend, a neighbor, a sibling, a mom, and a dad. Yuca’s represents five decades of what Los Angeles was and is today. The Los Feliz community has shown its love for Yuca’s.

“We love you more,” said Herrera.