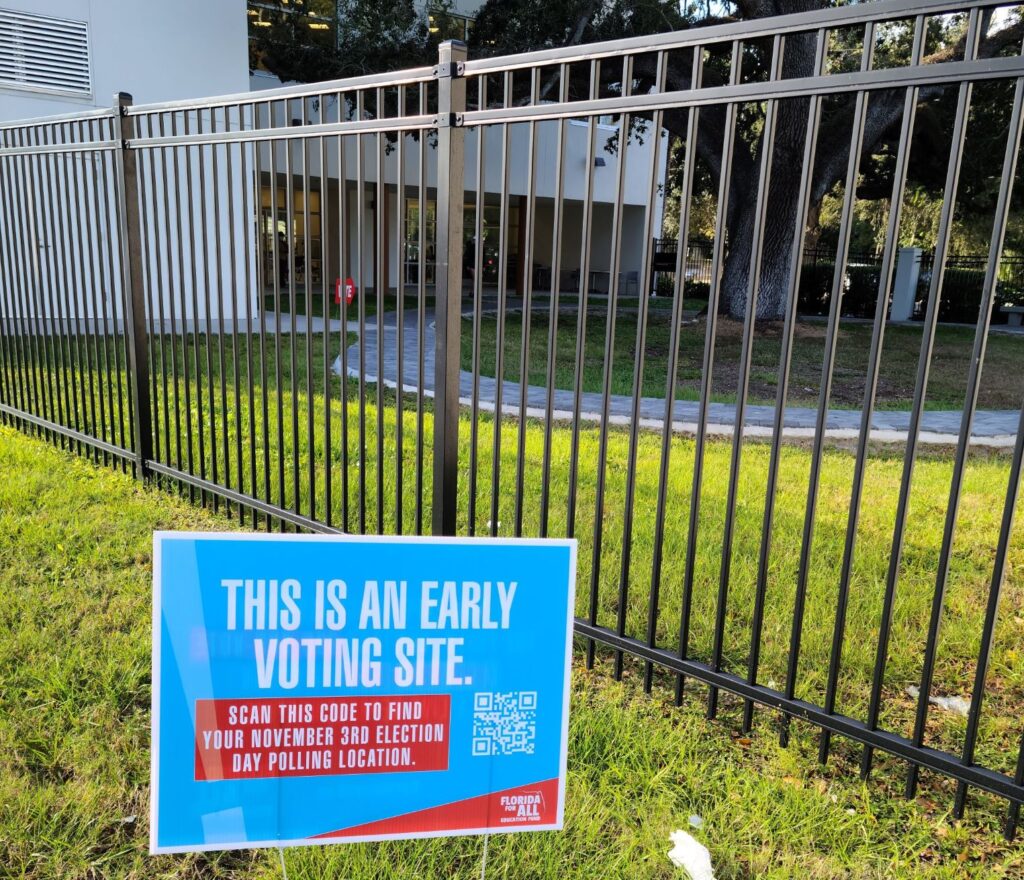 A local library served both as host for early voting and on Election Day. {Credit: CK Smith)

20 Years Later, Florida Has Its Voting Act Together

(TAMPA, FL) — In 2000, the state of Florida became synonymous with political mishaps and introduced the country to terms like “hanging chad.” Twenty years later, at least one county in Florida appears to have learned its lesson and made voting easier with multiple voting options, reducing the potential for problems on Election Night.

A big part of this could be two ways to vote that are already hitting record numbers —mail-in ballot and early voting. Unlike some states, Florida allows its voters to request a mail-in ballot without asking for a reason. After some initial concerns over delays with the mail, many counties established official drop-off boxes, many with easy drive-up access. This allowed voters to minimize contact during the ongoing pandemic.

Additional voting options coincided with opening multiple polling stations across the state. In Tampa and the surrounding Hillsborough County, 26 locations were available to early voters for 14 days. At the same point in the 2106 election, just under 393,000 voters cast their ballots.

“Our turnout right now is more than 563,000 votes, so we’ve had a terrific turnout so far,” said Gerri Kramer on Friday, Oct. 30. Kramer is the Chief Communications Officer for the Hillsborough County Supervisor of Elections.

“Our lines have been manageable because we have a trusted process around Vote By Mail, we’ve added convenient curbside drop-off for mail ballots, and we have 26 Early Voting locations open for 14 days,” Kramer said.

After all these early voting measures, Kramer said that they expected that 60% of votes would be cast. Hillsborough County opened 239 polling places for election day on Tuesday to prevent any kind of long lines. 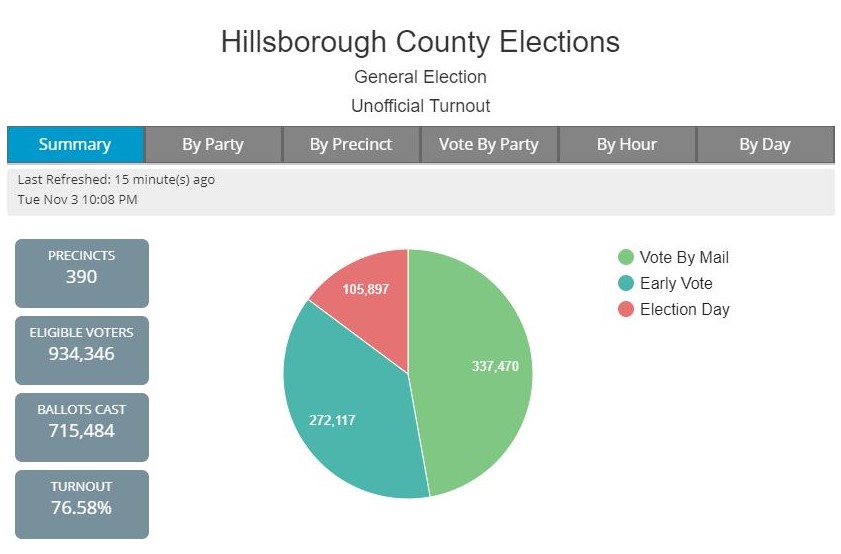 It seemed to work. A poll worker at the one polling center in Tampa, Zach, confirmed that lines were short all day at his precinct. But he told The Click that his friends who worked precincts in nearby Polk County reported at least 50 people lined up before the center even opened this morning.

John Johnson, a young poll worker, blamed the pandemic on the few people he saw at his precinct. “When I worked my first election [the March primaries], there were so many people, and it was back-to-back,” Johnson said. “It was like we couldn’t get a break because there’s a lot of people voting. But after everyone wanted to vote early, I came back [for Election Day] because it’s nice and calm in comparison.”

Johnson got his start in politics last March, right before he graduated high school. A teacher encouraged him to make some extra money by working at the polls. He fell in love with the process and now wishes he could do more. But he saw more downtime during Election Day, so he took time to read through the ballot and take notice of a few of the measures Florida voters are faced with this year, including an amendment to raise the minimum wage to $15 an hour.

“If all of these young kids found out about that [amendment], they would be coming to vote,” Johnson said. But he felt that particular ballot measure did not get enough attention in the media, with most of the attention being on the top of the ticket.

At another polling place, a group of people wore shirts proclaiming them the “Voter Protection Team.” One team member, Julian Gonzalez, is a veteran-turned-activist who wants to run for Congress one day. “We’re here just to make sure that people are coming to the correct place and to make sure that there isn’t any provocateurs or people of that nature trying to make it dangerous for people to vote,” said Gonzalez.

A nonpartisan group that says they want to “encourage the democratic process,” they also held up signs with a number to report voter issues like harassment and technology malfunctions. “I’ve seen lines wrapping around buildings, but this turnout seems amazing,” Gonzalez said.

He shared that the crowds at the East Tampa location they were monitoring, the West Tampa library, and the precinct in Progress Village will pick up for the last few hours due to work schedules and the demographics of the area. Most people tend to vote either in the morning or at the end of the day, around their work hours.

Only one person interviewed spoke of any issues they witnessed at the polls. Jay, a local electioneer, saw a Trump supporter hit a Black woman with a sign in the face. The police were called, but Jay said they asked the canvassers to deescalate the situation on their own. “It took a while, but we managed it,” he said.

Gonzalez also felt that Florida’s minimum wage ballot was not enough. “Well, if we look at inflation, historically speaking, the minimum wage today should be $22 an hour. Fifteen dollars an hour is not quite where it should be. [The amendment does say it] would increase or would adjust annually with the inflation,” he said.

However, Gonzalez was more concerned about what’s not on the ballot. “We’re in the middle of a pandemic, and there’s no Medicare and Medicaid expansion on the ballot,” Gonzalez said.

Amendment 2 passed with 61% of the vote, paving the way for Floridians to see a gradual pay raise over the next six years from $8.56 to $15 an hour.