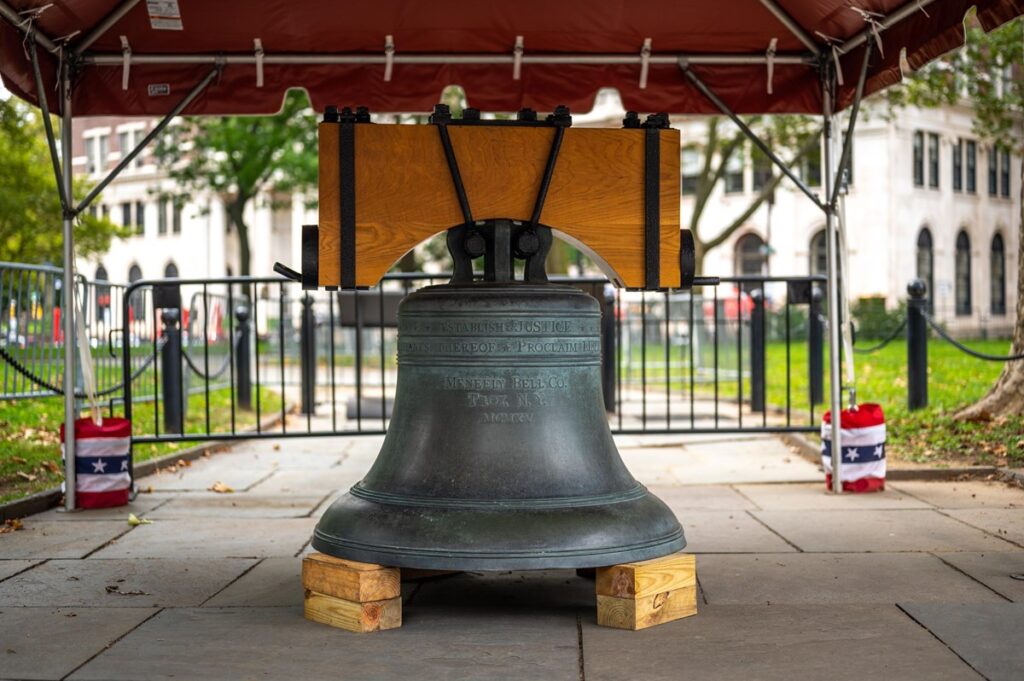 (PHILADELPHIA) — A slightly less famous version of America’s iconic Liberty Bell celebrated the 100th anniversary of its first ringing in Philadelphia, though structural issues kept it from ringing again.

Independence National Historical Park was unable to reenact the historic moment because the Justice Bell wasn’t situated on a proper platform, according to a park employee. With no way to hang the 2,000-pound structure, it rested on wooden raisers beneath a temporary pavilion on the south side of Independence Hall. The Bell was scheduled to ring on September 25 to commemorate its inaugural ringing for women’s suffrage 100 years prior.

Still, the day was not marked by silence. After park representatives reenacted the “unchaining” of the Bell, a group of children was invited up front to ring small handbells to represent the historic moment.

The Justice Bell’s history isn’t as well-known as its more famous cousin. The Bell is a replica of the Liberty Bell (minus the crack) and was commissioned in 1915 by Katherine Wentworth Ruschenberger, a member of the Pennsylvania Woman Suffrage Association. It was driven through all 67 Pennsylvania counties to raise awareness for women’s suffrage in the state. During its tour, the clapper (the part inside that swings to make the noise) was chained to represent the silence of women who couldn’t vote.

After the passage of the 19th Amendment in August 1920, the Justice Bell made its way to Philadelphia for celebrations at Independence Square. On September 25, 1920, its clapper was finally released and the Bell rang 48 times for every state then in the Union.

“The work of Katherine Ruschenberger and other suffragists laid the groundwork for more opportunities for women,” said Cynthia MacLeod, Superintendent of Independence National Historical Park. “But not necessarily all women. The struggle for women of color continues long past the unchaining of the Justice Bell. It is the perseverance of all of these women who have inspired me personally in my own life.”

“I remember that I stand on the shoulders of giants,” MacLeod continued.

If you missed the reenactment, you can rewatch the event on the Independence National Historical Park Facebook page.