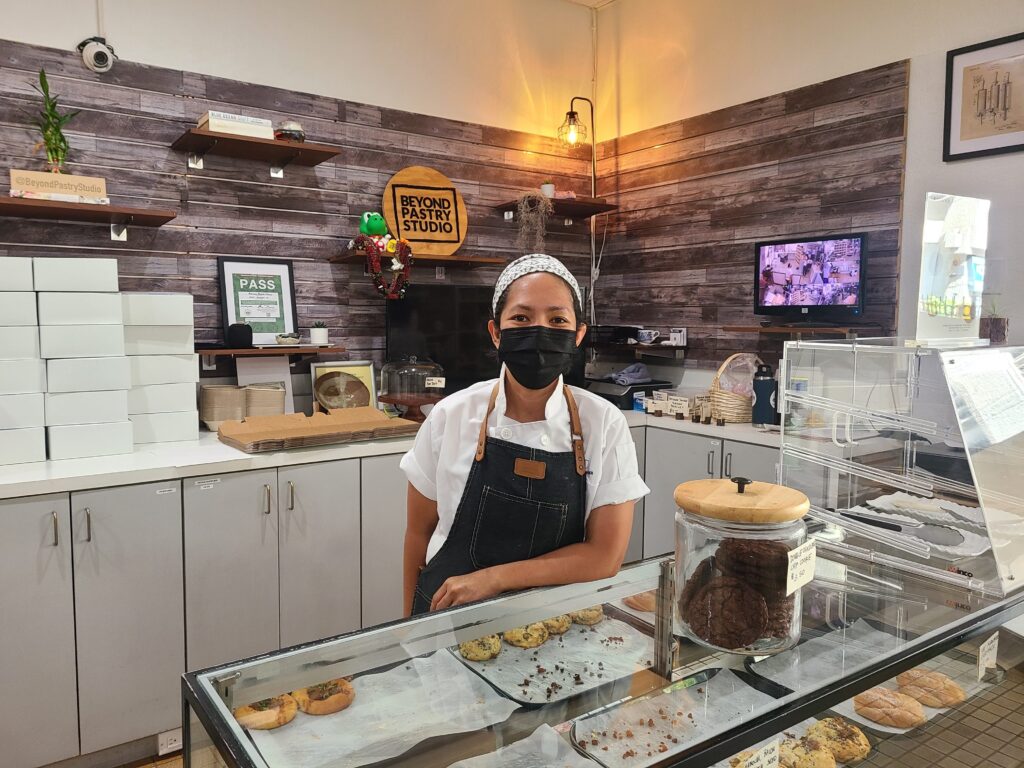 Chef and owner Cristina Nishioka stands behind the display case at Beyond Pastry Studio on November 5, 2021 [Credit: Tiffany Chang]

After a Year of Sellout Success Online, Beyond Pastry Studio Opens in Downtown Honolulu

(HONOLULU) — Amid a pandemic that closed 25% of Honolulu businesses, Beyond Pastry Studio opened its doors in Downtown Honolulu on Sept. 1, 2021, after finding sellout success online and in pop-ups.

In a year that saw a loss of 14,100 jobs from the previous year in the foodservice industry alone, Beyond Pastry Studio chef and owner Cristina Nishioka, 38, managed to create huge demand in the Honolulu food scene with her inventive pastries.

Initially starting off with a website she built in December 2020, Chef and owner Cristina Nishioka, 38, said she began building an online following. A few months later, in February 2021, Nishioka was a regular pop-up at Fishcake, a showroom in the Kaka’ako neighborhood of Honolulu. Selling out of her babkas, bread, and signature cheesecake, Nishioka recalled making around $800 to $1000 per pop-up.

Nishioka said that at that time, she had a two-month-long waitlist for her signature cheesecake. A version of the lighter Japanese cheesecake, Nishioka explained that her version is a layer of sponge cake, a big layer of cheesecake, a layer of mascarpone, and covered in sponge crumbles.

Nishioka might be a pastry chef by trade, but, to her, the pastries she offers are just the “icing on the cake.” Not a bakery, but a studio, Beyond Pastry Studio was designed to be a collaborative, community space, Nishioka told The Click.

Visitors to the studio must first walk past curated shelves of vintage art and ceramics by local artists. Most of the studio space is a large, clean, open kitchen space that Nishioka uses to bake her pastries. The “icing” of pastries is tucked away to the right, in a small case of Nishioka’s inventive and insanely popular pastries.

“What’s interesting about them is that they infused local flavors,” said customer Tina Kaku, 36, over the phone. Kaku said she tried several items from Beyond Pastry Studio, including a lilikoi-yuzu scone, plum tart, and kimchi cheddar scone. “It’s unexpected flavors put together. And that’s what makes it so unique. But the ingredients are so fresh that you can really tell the difference.”

Most days, she sells out of her non-traditional takes on traditional pastries, Nishioka said, with offerings ranging from a lilikoi-yuzu biscuit to a double chocolate chip cookie to a Portuguese sausage-furikake (Japanese rice seasoning) biscuit. The most popular is the ube ensaymada, which Nishioka explained is her twist on the traditional Filipino pastry — a soft dough swirl, dusted in butter and sugar and filled with cream cheese and ube, a Filipino sweet potato. Right now, Nishioka said, the ube comes from her aunt’s farm on Oahu. Nishioka said she makes about 50 of these a day. Most pastries at Beyond Bakery Studio range from $4 to $5.

Born in The Philippines, Nishioka said she began traveling the world in 2010 and teaching pastry masterclasses in the Middle East and Asia before settling in Hawaii with her wife in 2015.

Nishioka’s sense of community has already led to collaborations on multiple hugely successful fundraisers. Nishioka said she used the money she won in a cookie contest to raise $50,000 with the Society of Women Engineers-Hawaiian Islands Chapter to start the Mae Nakatani Nishioka Scholarship, a scholarship in the name of her wife’s grandmother and first female engineer in Hawaii. In April 2021, Nishioka collaborated with 11 other pastry chefs on a fundraiser for Stop AAPI Hate, with 100% of all sales donated. Nishioka said that the limited quality box sold out in 58 seconds and raised approximately $3,800.

Sales have been slow but steady at her new Downtown Honolulu location. Nishioka thinks that people haven’t fully come back to the office yet, but says that she is building regular customers that encourage her to hang on.

Economic recovery in Hawaii has been slow. Studies from the University of New Hampshire Carsey School of Public Policy show that currently, employment rates to pre-pandemic levels are down 13% in Hawaii. In fact, those studies show a current job shortfall of 12.9%.

But Nishioka is undeterred. Looking to the future, Nishioka said she is already planning baking workshops in 2022. “Working together, like with your community,” Nishioka explained, “ It could be a team building, it could be a birthday, it could be a night out with your boyfriend, or with your spouse. Things like that foster relationship, in a way, but in a fun way, because you’re doing something fun, and you get those treats after you bake them.”