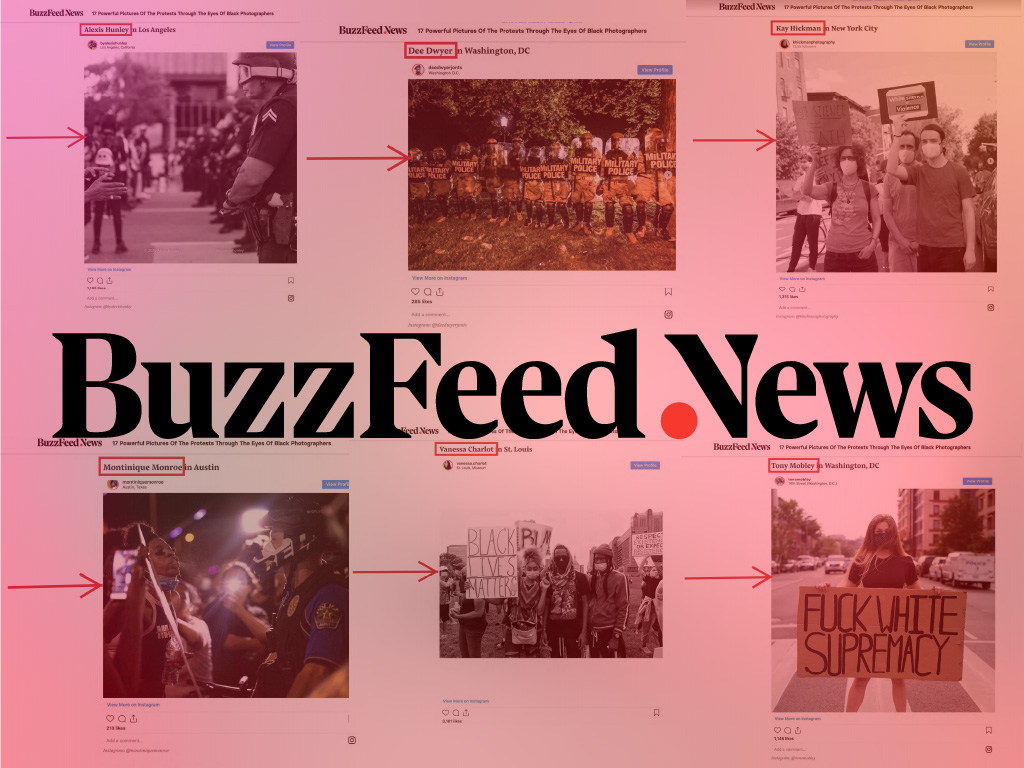 BuzzFeed News logo and screenshots of the embedded photos at the heart of the lawsuit [credit: BuzzFeed / Bartolomei and Hoben / Theresa Boersma] 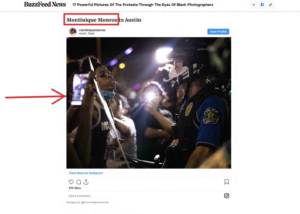 Photojournalists Alexis Hunley, Vanessa Charlot, Dee Dwyer, Karisha “Kay” Hickman, Anthony “Tony” Mobley, and Montinique Monroe took the images during May and June while covering the historic Black Lives Matter protests following the killing of George Floyd by Minnesota police. They each captured frontline images of the protests in Los Angeles, St. Louis, Austin, Washington D.C., and New York City. The six photojournalists make a living, in part, through licensing fees they earn by documenting events such as protests.

According to the complaint, the photographs were embedded directly from Instagram by BuzzFeed into its article “17 Powerful Pictures Of The Protests Through The Eyes Of Black Photographers.” According to the lawsuit, BuzzFeed did not secure a license, pay any of the six photojournalists, or ask for permission to embed the images from Instagram and publish their photos. As a result, BuzzFeed may be found liable for copyright infringement.

“This wrongful practice robs photographers of the opportunity to license their work and has greatly accelerated the collapse of the photojournalism industry,” said the plaintiffs’ lawyers James Bartomei and Bryan Hoben to The Click in a joint statement.

“Far too often, hardworking photographers and filmmakers see well-heeled media companies like BuzzFeed slash licensing budgets in favor of pilfering work from Instagram accounts,” Bartolomei and Hoben emailed in response to a reporter’s inquiry. “This has put an untenable strain on an industry already victimized by rampant online piracy. This must change. Only when ownership rights are properly protected will they be properly respected. And if tech companies wish to remain largely unresponsive to this plight, litigation becomes the creator’s best tool to see this change through so that they can once again make a living off of their work.” 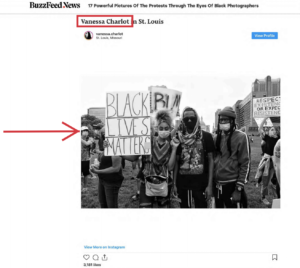 According to Bartolomei and Hoben, the BuzzFeed article aimed to “celebrate the work of black photographers amidst this year’s historic protests in the wake of George Floyd’s murder by a Minneapolis law enforcement officer.” However, they continued: “BuzzFeed was correct to commend these photographers for their work. But for BuzzFeed to steal the very work it claimed to laud in the name of costless content was exploitation of the highest degree. Of course, the exploitation of black bodies for profit was, in many ways, what this summer’s protests were all about. And in that way, BuzzFeed’s behavior resonates in a way that should infuriate everyone — even those with little interest in the inner workings of professional photography and the publishing world, ” Bartolomei and Hoben said in their statement.

BuzzFeed has since updated the article and removed the images taken by the six photojournalists, stating that “the original list did not meet our editorial standards regarding photo permissions.” A spokesperson for Rivkin Radler, LLP, the law firm representing BuzzFeed in the litigation, said: “Although we appreciate the opportunity, we cannot comment on active litigation.”

(Note: The author of this story runs a platform for visual storytellers and journalists whose members include an employee of BuzzFeed)